The Bull and Bladder 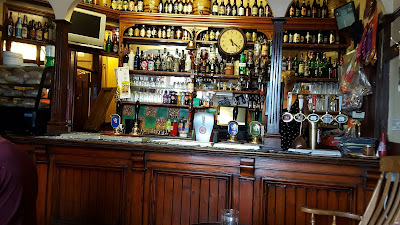 The home of Batham's Brewery, officially the Vine, but known by many by its alternative name as above,  is a fine place indeed.  The interior has four rooms linked by a central corridor, with brown glazed tiles on the walls and a serving hatch to service the various different spaces.  Like many, when there, I tend to be in one of the rooms off the main corridor, as indeed, most visitors do, but it is the inner sanctum, the public bar (though I don't actually know how they refer to it locally) that really is the prize spot. But wait a minute. This isn't a big room and there is pub etiquette to think of. You don't just march in to a place like this and  plonk yourself down.  Locals use this space and yes, they have a right to some respect and thus it is, that although I'd poked my head round the door more than once, I don't recall ever sitting there for a couple of pints. Until now. We called in on a Thursday just before teatime and the public bar was nearly empty. We were in the sweet spot after which the lunchtime mob has long gone and the teatime regulars had scarcely started to drift in.  There was probably five or six within and with us four, ten at most. The bar wouldn't comfortably hold more than two and a half times that, so you see my point I hope. It looked reasonable to do so, so we entered the holy of holies and sat in the empty seats below the main bow window. We were given a friendly welcome by the (once again excellent barmaid - a Black Country speciality it seems - and nods from the locals. So far so good. 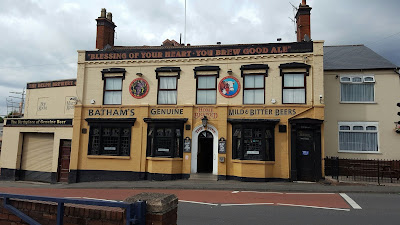 The pub itself has a history that can easily be discerned by our ubiquitous friend, Google, but of course I will mention its wonderful exterior, for this is that rarest of beasts, a pub that looks just as good outside as it is splendid inside. That's a lot rarer than you might think.  We parked in the handy car park opposite which gives a great view of the pub. While the others darted inside, I paused to observe and take in the place. It is a remarkably handsome building, two tone yellow and cream in colour, dark wood windows and its famous slogan painted at roof level in block capitals, "BLESSING OF YOUR HEART - YOU BREW GOOD ALE". Adjacent and attached is the brewery, with the proud words, "The Birthplace of Genuine Beer".  No false modesty here. They are proud of their pub, their brewery and their beer. And so they ought to be.

Batham's is a small company, with ten houses. That seems to suit them, though they do have a small free trade of around 20 accounts. I recommend having a look at the brewery's website which allows you to download, free of charge, The History of Batham's Black Country Brewery, a fascinating read, with many old photos.

Back in the public bar, we ordered pints of bitter and savoured this most traditional of brews, with its slightly sweet opening and bitter finish. Too good to have just one, we had another then left them to it.  The locals would be in soon.

Batham's is one of a very few breweries that still deliver beer in hogsheads of 54 Imperial gallons.

The Vine is situated at:

As it happens, we used a modified picture of this pub on the cover of our first album (so long ago, it was on cassette). It's interesting to learn a bit more about the place.

I've enjoyed the four posts about your visit to the Black Country.
But as someone who has worked in the area for a number of years in the past you seem to have missed one pertinent fact.
It's a shithole inhabited by the dourest people in England.

Well Tony. It is no more a shithole than most places and of course we only talked to attractive barstaff!

By coincidence, I made my first ever visit to the Bull & Bladder last Sunday, and it didn't disappoint.

The Black Country is a rather strange area, with lots of little towns and villages all running together into one. But I've always found the locals both friendly and proud of their identity.