Bank Holiday Monday, being uncharacteristically warm and sunny, E suggested we walk from our house down to the Rose of Lancaster, a Lees pub on the Rochdale Canal and a sometimes haunt of mine. Now the Rose is a managed Lees pub and if I may comment, one of the best run, with a landlord who is ever present and watchful. As my old boss in Scotland all these years ago would likely have said "He runs a good shop." And he does, though this isn't the point of this small post.

It is a downhill forty minute stroll from Tandleman Towers and we wandered down passing first JW Lees Brewery where there seemed to be a fair bit of activity going on and then, the second brewery in Middleton in the shape of Sarsons, where the smell of vinegar was fairly strong and I suspect is always so, whether they are brewing or not.  We even get the odd whiff of it  at our house. We arrived to the good news that the last cask of Lees previous seasonal, was on. Duly ordered, we took a seat in the beer garden and watched the world going by.  It was a mixed crowd, some eating, most just having a drink and many families and couples, whiling away a couple of hours in the pleasant sunshine even though the surroundings are urban rather than rural. Despite the canal being right underneath the beer garden and rolling hills and open countryside behind, the main views are of the Middleton to Oldham road, but it is still a decent spot and the pleasant scene was one we left with a bit of reluctance, especially as the beer was in top form. 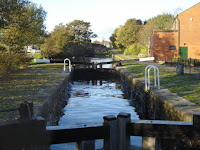 We hopped down the steps behind the pub and turned right along the towpath, taking us by way of a further forty minute walk, to our next destination, the Ship Inn, also a Lees house and one of my regular pubs, where I know nearly everyone.  The walk along a fairly quiet towpath is marred only by two things in what is lovely countryside. One is cyclists who whizz along without warning bells, their presence only felt at the last moment when they are behind you and the other, the rather intrusive pylons along the route.  But these are minor points. The walk, particularly in good weather is truly lovely and recommended.  The original engineering has stood the test of time and enhances the open countryside.

The Ship is a pub I've mentioned before. I often drink Bohemia Regent in here, particularly when the weather is warm. Many of the locals and visitors sat canalside, though that requires drinking out of plastic for safety reasons, or crammed into the tiny courtyard where glass is permitted. It was pretty busy, as was the Rose. That's good.

So if you are ever in this area, both pubs are recommended, but do walk along the canal between them.

The Rochdale Canal was started in 1798, so is of course pre Victorian by quite some time, though somehow it seems Victorian. The canal was completed before her reign.

Where are the nice photos then you ask? I nearly fell in off a lock while taking one. It put me off. So go and find out for yourself!  The photo shown is from Pennine Waterways and shows the Ship on the right.
Posted by Tandleman at 08:52

Nice post TM. Your walk by the canal reminds me of the time I lived in Romiley, with the previous Mrs Bailey. We were there for less than a year, between finishing at university and moving to London to start our first full time jobs, but in nice weather we would often walk along the canal (Peak Forest if I recall correctly), to nearby Marple.

At one stage the canal was carried in an aqueduct across a valley, with the railway running parallel on a slightly higher viaduct.

I can’t remember the name of the Marple pub we used to end up in, but it was a lovely walk just getting there.

Inconsiderate cyclists are a bug bear of mine on tow paths and shared foot paths/cycle tracks. I always slow down, ring my bell and give a salutary verbal warning, especially so near children, dogs and older people who may become startled. The worse place is the Leeds Liverpool canal going into Leeds - lycra clad commuters doing a Chris Froome impression, with no respect for other towpath users.