In Stourbridge for two nights, we stayed in the recently built - within the last two or three years that is - Premier Inn. This proved to be very handy for the Town Centre, just across the busy dual carriageway, past the Bus/Rail Interchange and you were there.  The walk popped you out via an underpass beside the Red House. 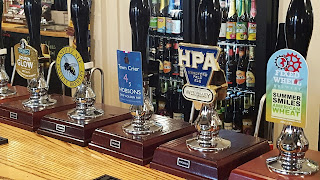 According to WhatPub this was formerly a Last Orders pub. Now these, on the whole, and I don't think I'm being unfair here, tend to be aimed at the lower end of the market. But this one had been done up very nicely, making the most of a modern design with a good mix of tables, high poseur tables and bench seating and seemed to all of us like a decent place to drink. A good range of beer from the wicket from the likes of Three Tuns, Holdens, Wye Valley and Enville among others didn't make us at all inclined to leave either -and we found out - a discount for CAMRA members.  For those requiring snacks, there were many exotics, including six different varieties of pork scratchings. It does have one little trick for the unwary of being up a small set of steps, but that kind of thing is only likely to trip you up on the way out. Now this was a Wednesday evening, usually a day of the dead for pubs, but a lively crowd stood outside about eight o'clock, supping ale and chatting happily. It was relatively quiet when we entered and once again we were greeted with great enthusiasm from the lone barmaid.  This smashing service from smart young women seems to be a Black Country thing and, you know, it is such a pleasure to see. We rapidly established her name was Frankie and as the pub got busier and busier, she flew up and down serving all speedily and with great charm. 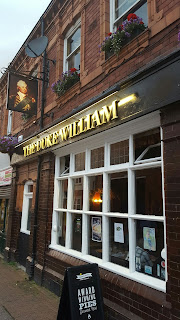 We wandered on, as you do in a strange place, to the Duke William, which was another beautiful old boozer, owned and run by Craddocks Brewery, a new one on me. This was a great place which we all liked enormously. A mixed crowd and an unspoilt interior charmed us all - as did the smashing barstaff - all female - who again couldn't have been nicer. Alas though, into each life a little rain must fall. None of us cared for the beer that much. Well, you can't have everything, but I'd go back in a heartbeat for the pub itself and maybe we just caught it on an off day. I'd like to think so.

On the way back to the hotel, we passed the Red House once more. The crowd had grown, but many of the same stalwarts we'd passed over two hours previously were still there.  Naturally we nipped in for a nightcap. It turned out that the cause of the crowd was a leaving do for someone or other, as revealed by the heroic Frankie, still controlling things brilliantly.

I think it was still open when we left around midnight.  Make hay while the sun shines.

The beer was excellent too and as we wended our way to breakfast the next day, Frankie was there again, giving us a cheery wave as we passed.  What a girl.

We did call in again on the Thursday for one and it was pretty dead. Our hostess must have been glad of the rest.  We ended up in the Waggon and Horses where we were well looked after in a tremendous pub by, you've probably guessed it,  a couple of very nice lasses.  As I said, they seem to specialise in it in the Black Country.
Posted by Tandleman at 00:23

It's a thought Nev. Just that in the Black Country there were so many. I like a pub run by a woman.

Careful now, you'll be annoying that Miranda Coke with all this sexist banter ;-)

Agree on all counts Peter, particularly on the good pub/less good beer at the William. It was better on other visits though, the home-brew lottery rather than the cask lottery I think. Pubs in the suburbs round here seem to sell a high percentage cask as well.