Many breweries have Area Managers. They look after a number of the brewery's tied houses in various ways.  The role has developed over the years, but was different once. In the late 50s and early 60s, when brewery takeovers were rife, the Area Manager became a kind of enforcer for the brewery and someone who encouraged the bad habits of the former company to be renounced for the different bad habits of the new company.

This extract gives you an idea of how this might be applied - well, in the case of Allied Breweries: 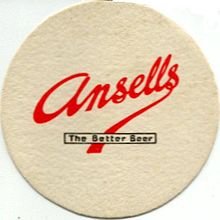 One key aspect of the merger movement was the opportunity that it gave for learning within the new companies. This was important in an industry which had traditionally been relatively closed to influences from outside. The trade press tended to focus on issues of trade defence, understandable in an industry under constant public scrutiny, but not an approach likely to encourage the development and sharing of new managerial practice. However, the corollary of this learning was that it was heavily conditioned by existing traditions, traditions which, as we will see, were heavily influenced by the policing orientation of area management.

It is interesting to note that this constellation was decided on following visits to the new component parts of the merged company. One of the key visits was to Ansells in Birmingham where supervisors controlled both managed and tenanted houses, each supervising on average 68 managed houses and 19 tenancies. What can be seen from these examples is the large numbers of houses, which suggests that supervision rested on a policing base, rather than on a detailed engagement with activities at house level.

An indication of this style can be obtained from this account, given by a former Birmingham supervisor from the 1960s: "One of the first things you did and this is in the mid-sixties, you took the manager into the cellar and I’ve literally, I have actually copped hold of a manager by his lapels and decked him. You would also say to the manager you can take six pence in the pound out of the till. If you take seven pence out of the till I shall have you in this cellar and I shall thump the living day lights out of you. If you take five pence out you are just as big an idiot as I take you for, because I’m telling you I shall look the other way"

Well hopefully things will have changed a bit since then, but clearly mergers needed a bit of shall we say, finessing on the ground.

I stumbled across this when looking for something else.

Source: Allied Breweries and the development of the area manager in British brewing, 1950-1984 Dr Alistair Mutch Professor of Information and Learning, Nottingham Trent University
Posted by Tandleman at 14:17