Like many others, I have been supping the odd beer at home, mainly, it has to be said, in the garden around five o'clock if the weather has been fine.  It has on the odd occasion needed a fleece to keep warm, given that here, it never seems to be sunny but not windy. Somehow though it feels more conducive to enjoyment and also better for mental well-being, to drink a beer in the fresh air, rather than in a lumpen mess on the couch in front of the TV. I suppose too, it is just that bit  more agreeable, with blue skies, a glass in hand and an overabundance of crisps or Pringles. In fact, together with the lovely E, it has been quite pally really.

Surprisingly, despite several weeks cheek by jowl, we haven't nearly killed each other yet. In fact, it has been pretty amicable. As an aside to that, I fancy the story might be a tad different if we had been marooned in our small London flat. At the very least I  imagine, tempers would have become frayed, but here in the Centre of the Universe, we have space to get away from each other. The garden too has been a fantastic port in a storm and though it won't win any prizes, it is neat and tidy. (My main concern is that the neighbours don't get a petition up against us, so we are doing fine on that score at least). 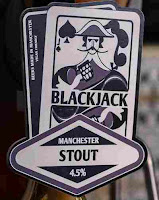 In addition, we have a Zoom meeting every Sunday with our pals from the Tavern. It started off a little stutteringly, but just like the real thing, the Virtual Tavern has become more lively as we get used to the medium.  Oddly - and you won't believe this - the sessions themselves get more animated and indeed vivacious, as we sup more ale.  It was ever thus I guess and with some diehards staying yakking for several hours, not so bad really, though clearly we all yearn for the real thing, which we  agree without dissent, is still a long time off.

I've been missing a decent pint of cask though and have been buying bag in the box stuff from our local Pictish Brewery, but have been hankering after a cask conditioned stout.  Thankfully I have located some and tomorrow (I think) five litres of stout will come from Blackjack Brewery in Manchester. It is described as "balances of malt, sweetness, bitterness and hedgerow hoppy aroma."  That'll do. I have had it in the Blackjack Tap before, so I'm looking forward to it, even though it is re-racked, but like the Pictish beers, fine if you don't leave it hanging around too long. Not a likely outcome I can assure you.

Since I don't have a bag-in-box adaptor - didn't anticipate the need sadly - like my Pictish beers, I'll rig up a workaround.  Expect to see photos of tightly sparkled stout sometime tomorrow.

It is even more surprising that we haven't killed each other. The day after lockdown E suffered a sudden onset of rather severe sciatica, which is only now almost gone. Her Stoic nature alone made survival of that possible.

My other go to lockdown beer, as mentioned before, is St Austell Proper Job. Why not share your lockdown favourites here.
Posted by Tandleman at 13:31

Vocation Smash and Grab. Their last delivery was 23 hours from Hebden Bridge all the way to Lytham.

Like you Proper Job. Adnams Broadside, Marstons Old Empire IPA. Limited by what I can get delivered / dropped off. But best of all my homebrew is back on stream, just brewed the 78th brew on the Braumeister. Not easy buying grain and hops as homebrew stores have been overwhelmed. I have now managed to aquire enough grain, hops and yeast to last for the foreseeable.

I wouldn't have minded being stuck in your London flat, an endless possibility of walks through history and closed pubs, but there's few better places for fresh hour than your bit of Lancashire.

I know what you mean about stout, always best on cask.

Mentioned elsewhere but the lovely lads from www.trickycider.com near Taunton have been sending over to Ireland their wonderful bag in a box scrumpy.
Of the canned local stout Beamish is the clear winner - their widget seems to work so much better than Murphy's or Guinness.
And the www.cottonball.ie Indian Summer in growlers is a delight when the sun is shining.Peach and grapefruit IPA.
Still well outside our 5km quarantine limit but only once stopped by a police roadblock.
Somehow they believed our cock and bull story but I get the impression they're as pissed off as the rest of us.

We've been drinking mini-kegs ordered from Fyne Ales. It's not quite the same as cask but is about as close as you can get atthe moment. Think we have just about got the hang of venting them now without spraying beer on the garage ceiling. Jarl never disappoints and we had one of Maverick last week which was a dark bitter, and really rather nice.

I've just ordered two more from Abbeydale for the bank holiday weekend. Will see how they go once they arrive.