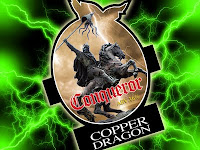 Copper Dragon Brewery is clean, modern, efficient and the beer is well made, though lacking a little in excitement. You won't find any beers stronger than 5% as the brewery - or rather its owner - firmly believes that beer is a volume based drink and as such his beers should be easily drinkable. The exception is Conqueror, which is chock full of American hops and drinks well above its weight, though the exception here is in taste, not alcohol. Conqueror is only 3.6% and joins a growing number of beers that combine great flavour and drinkabilty with lowish alcohol. It was probably the beer of the day. The people there are charming and fun - yes not a dour Yorkshireman in sight - though the brewery while claiming uniqueness in design, seemed to me to be pretty standard for any brewery that uses dual purpose vessels. They are in the process of expanding capacity up to the limit of Progressive Beer Duty and things seem pretty healthy now, their previous troubles apparently behind them.

The Bistro is pretty good too and provided much needed sustenance for a three hour pub crawl of Skipton, which I won't bore you with in any great detail. The best pub was the Narrow Boat which is something of a classic and a "must visit" if you are in the area. The Narrow Boat also provided the second low strength/high taste beer of the day in Ilkley's Mary Jane, which has a lovely hoppy taste from Amarilo hops and is only 3.5%.

So there you have it, a good day out to a nice town and a very pleasant brewery. On a personal note, the most striking thing of the day perhaps was to bump into a lass that used to work for me over 20 years ago in Liverpool. She lives on the Fylde now.

What a small world.

A quick couple of pints of Ossett Citra back in Middleton also impressed. Ossett are going great guns at present.
Posted by Tandleman at 11:55

Is this Conqueror going to be a regular? 3.6% is getting a bit strong for me though.

They may not be the most exciting beers in the world, but in the general run of pubs, for me a Copper Dragon beer on the bar will stand out from the others. There are a couple of pub company outlets in Stockport that have Copper Dragon as their sole cask beer.

Will keep an eye out for that Ossett beer; glad you enjoyed the Narrow Boat. Agree re: CD - it's a tidy, very shiny brewhouse but the bistro is excellent. Just wish it was a bit closer to Skipton!!

Copper Dragon Golden Pippin is one of my favourite beers. Such an easy, summery drink.

I've only been in the Narrowboat once, and on that occasion I was killing time before I failed my driving test and couldn't even drink. That wasn't a good day.

Nick - the brewery staff are pressing the owner to make it permanent, so we'll have to wait and see.

Agree with you on the Ossett beers: Revolution IPA is champion. Definitely a brewery to watch.

Was Conqueror Oli Fozzard's parting-shot after leaving Copper Dragon to take over at Roosters? Sound out of character for the boring dross Copper Dragon sell. As I live in Saltaire, Copper Dragon is everywhere. I've been to the bistro it was OK and I hoped the beers would be better at the source but they were as tired and bland as ever.
But each to their own, I'm not a fan.

Couldn't say Rob, but the staff loved it. As for tired - certainly not - as for bland. Well, yes, probably. Even Golden Pippin seemed subdued.