Some months ago, - not that many - honest, I was given a bottle of Kernel Black IPA by Glyn of Rake fame. He'd brewed it with the Kernel lot and bummed about it being pretty good. It sat in my London fridge for a few weeks then was given a new home in my Manchester one. When I moaned the other day about my lack of free beer, my benefactor rightly enquired along the lines of  "Oi Bollocks. What happened to the free beer I gave you then?" 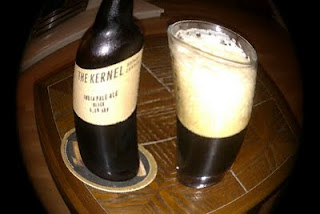 Well as mentioned above, it was safe and sound and yesterday I promised I'd drink it this weekend. Now a promise made is a debt unpaid, as my favourite poet once said, so last night in a rare bout of Saturday night Match of the Day watching, rather than my usual Sunday morning one, as E had gone to bed, I thought, I know, I'll have a couple of beers. So first up to warm up the old taste buds was Hopback Summer Lightning. Now this isn't the greatest cask beer in the world, but it translates into BCA form rather well. It was a good beer and one I'd drink again when the sun shines. Then I opened the Kernel Black IPA. As soon as it went "hiss" I knew I was in for something special. The fresh hop aroma just jumped out. The taste was sublime, the body, mouthfeel and carbonation perfect, the head retention good and the complex, balanced roast and hop flavours a marriage made in heaven. It was also a masterclass in how to use hops well.  I was brassed off big style that I only had one. I won't mess you about. This is simply one of the best bottled beers I have ever tasted and I don't give such praise lightly. Oh and if you want full tasting notes - see the Kernel chaps. I was just drinking it.

Naturally this morning I let Glyn know I'd drank and enjoyed it and asked if it was still available. He confirmed it is now a permanent addition to the Kernel range. Now maybe I just touched lucky with this bottle and the length of time I kept it. I don't even know if it is bottle conditioned, but who cares. Next time I'm in that there London, I'm going to Kernel to buy some.

You should too.  Trust me on this one.
Posted by Tandleman at 12:49

I've yet to try much from the Kernel range. Must rectify that.

I can confirm it IS bottle conditioned.

I have not had a bad beer from Kernal yet. One of my favourite British breweries.

I've never had a bad beer from Kernel yet either - Evin seems to be equally good at pale beers as well as excellent stouts...