No, I haven't stopped blogging. It just seems like it. It is over three weeks since I did, but largely this is because CAMRA life has intervened in the shape of Rochdale Beer Festival - very successful thanks for asking - where I managed the bar and the beer - and of course looming on the horizon and giving off as much black smoke as a Russian aircraft carrier, is Manchester Beer and Cider Festival which for me, as Deputy Organiser, means lots of work, lots of prep and lots of coats to hold as differences of opinion rear their heads. Yes, your hero Tandleman is a peacemaker.  Oh and if I didn't have enough to do, I have just sent off our local CAMRA Magazine to the publisher and am awaiting the proof. It has been busy, busy, busy.

So what has caught my eye in between all this stuff? Well an article in the Daily Telegraph that's what.  Seems our chums in Fullers have been selling less beer and making more money. That's a good trick on one hand, though clearly not on the beer selling other. So how has this neat little manoeuvre been achieved?  Well it seems craft beer is the answer. Despite the total beer and cider sales falling by a rather alarming 4 percent, it seems that sales of craft beer have risen considerably and Fullers Beer Company has grown profit by no less than 8 percent against a background of a switch to higher end drinks. Also hidden in the midst of all of this is the observation that profits in tenanted pubs fell while those in managed pubs rose. This reflects a trend of breweries and indeed Pub Companies with tenanted or mixed tied estates switching their focus in bigger houses to management. This is just one more move away from the traditional model of pubs and beer that pertained for so many years and is significant. 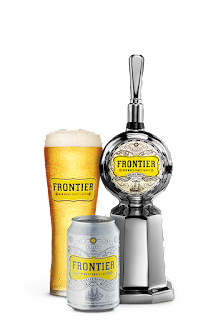 So back to craft beer.  It isn't necessarily volumes of sales that are the salvation of Fullers profits, but a most basic of trading concepts.  It is all about margin. You can sell craft beer, especially in house produced craft beer such as Frontier for a bigger price.  Who'd have thunk that? If you actually produce that beer yourself and convince your customers of its worth, you can charge more for it without it actually costing you that much more to make. Once it is more widely understood that not only is craft beer attracting the more price insensitive customer, but you can make big money from it then you can actually see where the likes of ABInBev are going with their current policy of buying up craft breweries. Pennies are dropping all over the place.   Many of the smaller regionals are already going that way - think of Adnams as a good example and maybe even the likes of JW Lees will be selling beer in fancy 330ml cans to join the gaderene rush before too long?  How meaningful - if it ever was meaningful - is the term "craft" now?

And what about the purveyors of murk - sorry cutting edge breweries in their cold railway arches? Back to the niche I'm afraid.   That's their place in global brewing as the big boys circle. The times are changing.

I'll be writing about Manchester Beer and Cider Festival before too long. I'm going to tell you about the grub. You'll like it

When I get back from Frankfurt that is. Apfelwein anyone?
Posted by Tandleman at 14:27 11 comments