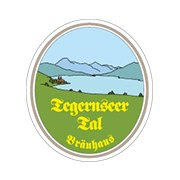 On a recent Munich visit, after the usual Christmas market stuff two or three weeks ago the lovely E and I decided that  a quick visit to Tegernsee am Tal was in order. Now a couple of points are worth mentioning here. The first is that I have been in this pub a few times before despite the fact that it hasn't been in its current location for too many years. The second that I've been to the brewery itself and the third is that for years I have sold Tegernsee Spezial - one of my favourite beers - on the German Bar at the Great British Beer Festival.  I know the beer. This is a relevant fact.

So in a quiet spell around 4 p.m. the pub is pretty empty. In the front a couple of locals have pole position for people watching and inside there is another pair near us. In the restaurant area, three Americans eat salad, drink dark beer and chat. Not quite the Mary Celeste, but fairly close. I order a Spezial and a Helles. We sit in the semi circular booth seat overlooking the bar. I can see, despite the brass or copper frontage, the beer being poured. It is fine. Poured straight from the tap it is golden, clean tasting and clear as a child's eye. Nothing much happens as we observe languidly and chat. My beer, the first of the day, disappears without a protest. It is good. Very good. I order a second. Again I can see what is going on under the beer taps. This time there is a bit of juggling with beer glasses. My beer when presented has a more tired looking head and isn't so sparking. Not cloudy, but a tad hazy. Certainly no longer zingingly clear. Hmm. It is flatter too. Seems I've had some older beer poured into my half litre and topped up with fresh. Damn.

Bonus. In the next pub, we arrived just in time for Ayinger Brau Helles vom Bayerische Anstich being freshly tapped - as happens at five every day. It was rather lovely.
Posted by Tandleman at 11:31 5 comments