Weather Turns - But the Future Gets Nearer

Allowing pubs to only open outside was always going to be of marginal benefit to both them and their customers. Only a quarter or so of English pubs have anything like you'd call a beer garden, with a small majority of the rest having various outside facilities ranging from a couple of chairs outside the door, to something a little more elaborate, but still hardly a bucolic garden with weeping willows and wisteria. 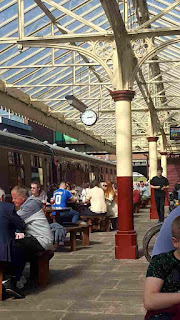 But hey ho. Ingenuity and optimism kicked in and a minority managed to stagger open and given that the weather was relatively good, the crowds flocked in.  Well until the sun went down that is and the bitter reality of a British spring with its chilly evenings  kicked in with a vengeance, sending customers scurrying home to warm up and gather their thoughts on the experience. I think though it is fair to say that most customers were and are well-disposed to the plight of pubs and publicans and went along, with as cheerful a face a possible, with conditions that they otherwise might have snubbed or derided.

There has been a few complaints which can be regarded as nitpicking on one hand or, seriously demeaning the experience on the other.  Complaints about slow service can be regarded on the whole as moaning. The system is new to both customer and server and while a ten-minute wait is annoying, it should - as a general rule - be regarded as the price we pay for restrictions that are as unwelcome to the publican as they are to the customer.  Of course some pubs are better run than others and where customers have the galling experience of waiting excessively for their first drink while glasses are refilled elsewhere, they have a right to complain, but it was ever thus in the UK. All is fair in love and bar and while the wise and busy pub will have a manager keeping an eye on the queue order, many do leave it to survival of the fittest.  My top tip is to bag a seat near where the servers go in and out of the pub, no matter whether there seems to be more attractive seats elsewhere.  On the whole though, tolerance seems to have been good and although the way the offer has been presented has ranged from sublime to ridiculous, most customers have just been happy to be out and about with a beer in their hand and pals around the table and equally most running the show are doing their best.

Mudgie has mentioned one or two of the annoying interpretations of the law on all this. To it, I'll add plastic or polycarbonate glasses. I know some drinkers don't mind these and while I can just about understand it in City Centre venues where roads have been converted to chairs and tables and the customer  base is peripatetic, on the whole it is not only to be discouraged but despised.  The real reason for this imposition is, put simply, that those in authority don't trust the public to behave. I avoid such places though admittedly, it is a bit of a personal hobby horse. 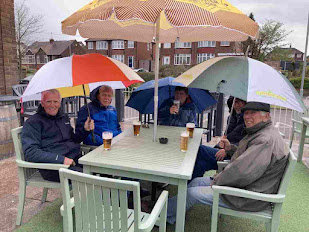 My own experience overall has been good. One  of  my regular local pubs has a decent beer garden, a top manager and experienced staff. When the weather was fine it was a pleasure to be there. I have been back in the perishing cold too and that as you can imagine wasn't quite so pleasurable, though the service was still top notch. The wait staff looked pretty cold too, but still smiled. A much bigger venue in Bury, with security at the gate, was also well-organised and controlled and everyone seemed happy. Beer was in cask and in glass, so what's not to like? I have also discovered a hidden beer garden in a small local pub which was a pleasure to be in and been tipped off on another. So on the whole, pretty reasonable in the circumstances.

Speaking to publicans, though it isn't customers - or restrictions that worry them most - it is the good old British weather. The next two weeks don't look great in that respect, but of course, we are getting nearer and nearer to the blessed day when pubs re-open indoors, for which thanks - or rather relief.

So bear with it fellow drinkers. Everyone is doing their best and for all of us, better and warmer times are ahead.

I wrote this yesterday and I always allow a few hours, so I can review what I wrote. (Even if it doesn't look like it.)  E was out, so I nipped down to the Rose with a big coat on. It was busy and the sun was peeping out. As time passed the clouds rolled in and coldness was followed by rain. Not all tables were under any cover, but with admirable stoicism, the drinkers carried on regardless. It was - if you will - that British "thing" of sticking with it. Blitz spirit if you will. The show must go on - as it did - but I'll be honest. I was bloody freezing.

Today looks pretty dodgy too. The photo of customers in the rain is from the Lancashire Fold. It was much the same in the Rose. I took the other in the Trackside last Saturday when the weather was warm and sunny.