As You Were - More or Less


My old friend RedNev reported that the Dispensary, one of Liverpool's finest real ale pubs, would no longer stock real ale following the retirement of the previous landlord who had ruled that particular roost for some years - and in his own very strict way.  It is a favourite Liverpool haunt of mine whenever I am there, so the news, later corrected by Nev, was not welcome.

Now I hadn't read Nev's correction, so when I was back in Liverpool last week, I nipped in to find out what was what and it seems that apart from some music being played over the speakers, nothing has changed.  Most important of all, my beloved White Rat was in its normal place and was in exemplary condition.  A brief chat with the barman confirmed that those who had taken it over intended to keep it just as is, which is excellent news, as it is the kind of traditional boozer you just don't see enough of these days.

Looking through the window to the pub next door though things certainly had changed. The Roscoe Arms has now become the Butterfly and Grasshopper which was a bit of an odd one to me, but seemingly has a Roscoe connection.  According to the Liverpool Echo, the new name is inspired by William Roscoe’s poem The Butterfly’s Ball and the Grasshopper’s Feast which I must say I have never heard of. Here's a little taste of it for you:

Come take up your Hats, and away let us haste
To the Butterfly's Ball, and the Grasshopper's Feast.
The Trumpeter, Gad-fly, has summon'd the Crew,
And the Revels are now only waiting for you.

We didn't notice if the newly refurbished pub was open or not, but with excellent beer on hand and the promise of more, we didn't care to find out.

I thank the Echo again for revealing that the £750,00 transformation of the Roscoe Arms is by a division of Star Inns aka Heineken. I sort of regard them much as I did Whitbread in the old days, which isn't highly at all.

The poem can be found here and is a nice little nonsense poem if you like that kind of thing. Which I do.

If you see Rat Brewery White Rat - order it.
Posted by Tandleman at 13:52 15 comments


One of the things that is often overlooked when it comes to pub appeal is what is sometimes called "Engagement with customers" or in old fashioned terms, the welcome. 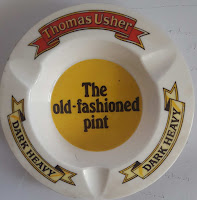 One of the first things I was taught when I became a part time barman back in the early 70s was how to welcome customers.  The Boss, an old school landlord and  stickler for such stuff, was very keen that things should be "done right".  First lesson. Rule number one. When a customer comes in and approaches the bar, no matter what you are doing, you look up and say "Hello" or "I'll be right with you" or some such other nicety.  He explained it as putting the customer at his ease; setting the tone. That kind of thing.  The second was to let people waiting at the bar know they had been seen.  You would preferably say "you're next", or second or whatever. And yes, you were expected to know whose turn it was and if you ever said "Who's next?" you'd be rewarded by a growl in your ear and the Boss saying "It's your job to know who's next".

Now back in those days there were many more pubs and indeed, many more customers.  The Boss reckoned that good service would often make a difference in the customer's mind. (Likewise he always said that if anyone complained about a pint, you should exchange it without hesitation. His argument was that the goodwill thus generated through word of mouth was worth more than the occasional drainpoured pint.) Returning to customer welcome, in that respect I'll venture nothing much has changed about the fact that it works.  Good service, a smile and a word can make a big difference. Far too often these days barstaff  will rarely even look at you if they can avoid doing so and as for knowing who is next - well - not going to happen. I have often been served a pint with no eye contact and no words being exchanged. How poor is that? And don't get me started on the now ubiquitous "You alright there?".

I was reminded of this when I was in Liverpool a few weeks ago. In every pub we went in, we were engaged in some kind of conversation - even in the busy JDW at the station where we met to discuss our drinking plans for the rest of day.  OK, it was lunchtime to mid afternoon and the pubs ranged from busy to moderately quiet, but in each you felt that you were actually important, where as in many these days you do well to be even noticed.

Too often what is missing from the hospitality business is hospitality.  In the days of pubs struggling, that should be an easy win, but one that is so often noticeable by its absence.

Another thing we had to do was say goodbye and thanks to customers. When did that last happen to you?  And then by the way, we had to clean the entire pub including the toilets, before we went home. We were paid buttons and supped it all when we finished. And we loved it.  It is likely where my enduring love affair with pubs was forged.

I wrote about this kind of thing a few years ago. Well 8 years ago. Here  it is. Time flies.

The Thomas Usher ashtray came from that pub. It is the only physical thing I have from there.
Posted by Tandleman at 14:47 47 comments