There's a lot of doom and gloom about cask around these days. "It's all being cut back as nobody is drinking it" type of thing and amid that a suspicion - told me by a very reliable source that "fings aint what they used to be" in a rather unexpected way. My source tells me that some cask beer from some larger independent brewers is actually brewery conditioned, such is the fizz and clarity of the beer, combined with the complete absence of sediment.  There is a suspicion that some who have switched to bottling and canning, now that the pubs have re-opened, and cask demand has returned, to meet this demand, beer held in tank and set aside for canning but no longer needed for such, is put into cask without that bothersome business of cask conditioning it. Now this is all too possible, but hopefully if so, was only to use up stocks. If you know any more about this, do let me know. This is not a clever thing to do at all, for many reasons.

In these all too troubling times, another thing you get from those who should know a lot better, is that cask beer should be saved by premiumising it.  Yes Folks, a perishable product, often kept badly and served in appalling condition, should cost more to save it. Such logic would make a cat laugh.  For the umpteenth time, what you need to do with cask beer is keep it well and turn lots of it over. This increases quality and confidence, which then means more sales. A virtuous circle. Maybe when everyone does that, then we can talk about price. Until this happens, then charging more to make it better, just isn't on.

And while I'm about it, it isn't more difficult to keep cask beer than any other beer. You just need to know what you are doing, and that can be learned very quickly indeed. Time we stopped pretending on that one too.

I know big brewers have been sending out re-seeded more or less brewery conditioned beer for years, but at least they do ensure a live yeast count.

In my next post, I'll talk about a real ale nirvana.

When you repeat the same thing and hope for a different outcome, is one definition of madness. Thus it was on a recent visit to London, on a Sunday, as I often do, I persuaded a reluctant E to walk across Tower Bridge to visit one or two of the Brewery Taps in Druid St that open that day.  Now in my defence, I wanted to go to Ansbach and Hobday, whose beers, of those open,  are probably the most conducive to my taste and I do particularly like their nitro porter, which I've yet to find elsewhere.  So we went. Now in the summer, on a Sunday, the place is still as dead as a dodo, but at least it is warm and sunny by and large, and you can people watch a little, if only passers-by.

After a couple, one outside until it felt too cold and the other inside, in as gloomy a boozer as you are likely to encounter, with zero atmosphere, we wandered round the corner to Enid St where another three lookylikeys are located. We thought we'd try Cloudwater, as I'd kind of slagged them off a bit unfairly before when we couldn't get in. Well frankly that was a much better experience.  The capacity seemed to be fourteen. Us two plus the existing twelve. After signing in and being given the low down on arrangements - by a very pleasant bartender to be fair - we were given two high stools against a wall while the beer was brought to us after downloading an app. It all took over fifteen minutes and the beer, frankly, was disappointing, but it knocked the atmosphere into a cocked hat. Maybe it was the obvious restrictions, maybe it was just the somewhat antiseptic arrangements, but I've rarely seen such a glum funereal group and, as we sipped our beer, we just felt deflated. 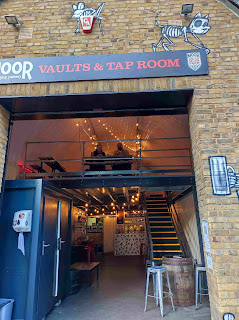 Leaving after one we, nipped next door into Brew By Numbers, which was pretty empty too and after one beer,  similar to next door really, we left, and having not learned our lesson, tried Moor Beer one door down. Pretty empty too, but at least the inmates  - or rather outmates - as almost nobody was inside - seemed a trifle more cheery. Maybe it was the strong beer? Or the cigarettes? E though had had enough and with grim finality declared "There is just nothing here I want to drink". I don't think anything was under about 6% except another gassy Mosaic Pale Ale, so I couldn't blame her.

As we retreated, heading back towards Tower Bridge, E demanded to be taken to a "proper pub". I recorded her remarks in a tweet here:

Currently in Enid St. E says " I don't know why you drag me to these places. The beer is always shite. " I mansplain it is meant to be like that.That doesn't get me out of the bad books. 😫

Now before you say it, I have been to most of these places on a Saturday and the atmosphere is much better, but I think I have to face facts. E and I just aren't the target audience. We will never really feel at home in such places, as the beer and the demographics just don't suit us. I know they vary and some are, indeed, much better than others, but we generally feel out of place in them, which hardly makes for a good time. I must say in different ways, we didn't like any of the three Enid St taps and Ansbach and Hobday were better only because the beer was more to our liking.

As an aside,  I am often asked why I'm rarely seen in the taps of many of Manchester's microbreweries. The truth of it is provided by our London experience. They just do almost nothing for me and seem, even when busy, kind of impersonal and home to the samey kind of beer I just don't want to drink. In Manchester too, there is the added "bonus", often, of being served in plastic glasses.

So it is back to pubs for me and E of a London Sunday. There is life there. Ansbach and Hobday, if you are reading this, I'll likely call again for the porter, but I'll be across the road in the Marquis of Wellington to drink your lovely pale.

And these godawful glasses they insist on. They hardly make the experience better. And don't think for a second they are cheap to drink in.

I have sat on this post for a while, but for better or worse, I'm posting it. For those that love brewery taps, especially those in railway arches, good luck. If you enjoy it - fine. You'll have the added bonus of being unlikely to see me there. I'll be with the codgers down the pub.

Addendum. I see a new list of Manchester Taps etc. has been published. Maybe I'll try them all  with an open mind? I doubt if E will come though.