Mildly Unhappy with Myself 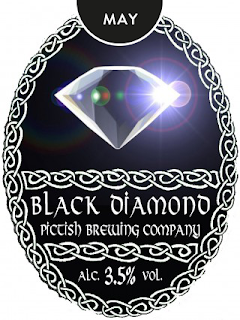 May was - and as I write still is - Mild Month. Now I like mild, especially a good dark mild with a bit of richness and and a tight creamy head.  And hush the mouth of the contributor to something or other, somewhere, about sparklers, who said that mild (of all things) doesn't need a sparkler. It does.  In fact all cask conditioned dark beer benefits greatly, even if in the best of condition, from being sparkled.  Cast into the outer darkness anyone that tells you differently. Personal preference aside, they know not of what they speak and a thin, headless mild will not attract anyone but the most joyless of malcontents to the genre - and it is a genre that surely needs help and the best of presentation.

Anyway, late to the game through circumstance and laziness, I had a couple of pints of Pictish Black Diamond Mild on Wednesday.  It was lush. Very lush. So much so I regretted my previous two pints and wished I'd noticed it earlier.

I couldn't imagine it unsparkled. Nor should you.

With my usual fecklessness, I didn't take a photo of the beer. Yu'll have to make do with the download from the website.

Paul Wesley, the brewer at Pictish is a tremendous brewer and a very fine fellow. Seek his stuff out. He is a Scotsman too, so bonus.
Posted by Tandleman at 10:55 13 comments


Our Greek trip hadn't got off to the best of starts, with E having her bag dipped on the severely overcrowded bus from the airport. Fortunately all they really got was a credit and debit card, both of which were cancelled within 15 minutes of  being stolen. Also, sadly, her emergency tenner which E keeps hidden in the unlikely event of having to buy a drink.  But it upset the lass which wasn't good.

After we checked in to our hotel and sorted out the cards, we both felt like a drink. I suppose the theft didn't help, but we had that thing we sometimes experience when we venture out in a strange city for the first time.  We couldn't really find anywhere for a beer. As  we explored and calmed down, that soon wore off, but sitting with that much needed Hellas Fix, it reminded us both of our first time in Hong Kong where we couldn't find anywhere to eat. Some kind of city blindness? Dunno.


Thessaloniki is an interesting place, but a bit of an architectural disaster. It seems that in 1917, the French Army, through the sort of negligence that you would hope not to encounter on a regular basis, contrived to burn the place down. Not just a bit of it though, but nearly all of it. Only one area near the harbour survived, along with some impressive  Roman stuff from the 4th century AD. The bit that remained was really the only original part of the city still standing and had, over recent years evolved into a kind of entertainment hub, with bars and restaurants galore. According to our friends at Google (or was it Trip Advisor) one of the best restaurants for authentic Greek food was just around the corner - well several corners - from our hotel in Thessaloniki. Great, so we went  the second night to eat, though we had a look at the area in the late afternoon of the same day when a lot of it was closed. Just to get the lie of the land.

This area actually had pubs - or as near pubs as you were likely to get in Greece.  Somewhat unexpectedly though there seemed to be craft bars - no walls of steel. But certainly there was a number of different beers other than the holy trinity of Mythos, Alfa and Fix. Some were even brewed in Thessaloniki. The Greek habit of leaving menus outside on tables helped establish that they were the usual suspects, Porter, IPA, Stout and lager. Nothing unusual there really, but all reassuringly expensive.

Our restaurant was busy when we arrived. We sat outside, ordered some retsina while deciding on eats and looked around us.   There was the usual smattering of couples and a long table by the door contained a mix of couples of indeterminate nationality, drinking wine and beer. To our left sat a table of four, walnut coloured from sun, obviously well oiled and possibly from one of the "Stans" we thought as we earwigged on their somewhat gutteral tones.  The men were drinking what we guessed was vodka, thus (wrongly) cementing our ex Soviet area thoughts.  A pair of musicians, one on a  bouzouki, one on a guitar, played and sang. It was all very jolly with the tables I have described being pretty enthusiastic as they clapped along to the music. 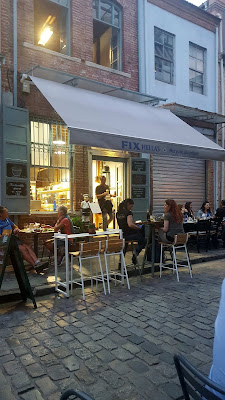 The four beside us, after a while and to our astonishment, then rose and and danced in front of the musicians. They sang along to the tunes as did the long table. Greeks then?  All became clear as the night wore on. Our dancing friends engaged us in conversation and invited us to join them in tripping the light fantastic. Fat chance, but it became clear they were all Israelis. The so called vodka was ouzo.  It seemed too that upstairs were even more Israelis, all along for the authentic food and music.  I know this because the toilets were upstairs and the back and completely unreachable, such was the crush.

Next door was a pub that sold almost the entire Brewdog range of beers, plus Mikkeler and more. Should we go for a drink there? What for? We can get those at home. We retired instead to a nearby souvlaki bar, ordered more retsina and watched the world go by.

It isn't always about beer.

One incident sticks in the mind though. As we chatted to the Israelis, a commotion attracted us. One of the upstairs Israelis was carried out by his compatriots and laid out on a marble slab bench in the adjoining square. He was completely and comatosely pissed.  It isn't always Brits you know.

The food was tremendous and very authentic with enormous portions and great service, so that was good too.

The photo shows our favourite souvlaki bar.
Posted by Tandleman at 15:51 5 comments