Covid Cases Rise, What Next for Pubs?

There is a sense of grim foreboding that you can palpably sense in pubs at the moment. Having lurched back into business - after a fashion - with all the accompanying difficulties, custom has more or less halved in many places.  The booking of tables, working out who can be admitted and who can't, the need to sanitise everywhere and everything and the setting up and operating systems to help track and trace has stretched resources and strained nerves.  It has been a large and unwelcome imposition, but what's the alternative?

On the customer side, there is a degree of reluctance to visit pubs, especially from the elderly and a nagging worry that if you enter somewhere where the provision of safety for customers seems less than paramount, that you really shouldn't be there. This nervousness, together with the less than normal atmosphere in many pubs, makes for an experience which is hardly ideal. And it could get worse as the number of Covid-19 cases inexorably rises. At the moment of writing, you are also likely to be unable to get a virus test, even if you feel unwell and few have much confidence of that changing in the short term.

Landlords I have talked to recently are gloomy and concerned. They order only the minimum amount of beer to get by, cut down on variety and some feel that a total lockdown would be the last straw. For quite a few, if doors close again, then they won't open again. But will this happen?  I sense that the Government will only do this as a last resort and rather think that what will happen is much stricter control by authorities, particularly in areas badly affected by high virus rates.  Those there that don't follow either law or guidelines, will find themselves under a closure order toot sweet.

Of course other options exist. On Twitter some weeks ago I was given a bit of a bashing by some for suggesting that younger adults within society of being less keen to follow the Covid-19  rules, but now it seems that view has become mainstream.   Whether you personally agree or not, there now seems to be a view among experts, that something must be done to curb the spread from those likely to suffer least from Covid exposure, to those that will suffer most - kill your granny and all that.  I have thought for some time that what is most likely to happen is that there will be a limiting curfew of some businesses; pubs, bars and restaurants being among them. While there is little evidence that pubs are particular spreaders of the virus, it does seem that the easy target will be chosen again.  This YouGov poll illustrates some views to support such a thing:

69% of Brits - and a majority of all age groups - say they would support a 9pm curfew on pubs and bars to help reduce COVID-19 cases https://t.co/Hl8jBT3OgA pic.twitter.com/ENHxj3JVhE

Now anecdotal evidence suggests that as time goes on, younger drinkers may well be the target of such a move. I have the impression - and it is only that - that there is little feeling of invincibility from older drinkers and pub goers and that such a move - as an alternative to closure - would be welcomed by many and not just older people. What is striking about the poll is that even those most likely to be affected by such a curfew, support it.

There is no easy answer to all of this, but I know many mainstream pubs already feel that later opening isn't currently worth much in business terms.  That is not to say it would be welcomed, but a curfew if it happens,  may well be the lesser of two evils.

It wouldn't affect me particularly if this happened, but would it be effective? I just don't know as I'm rarely out and about when youth rules the evening roost.

It is though galling for pubs when so many have tried so hard to make things work, but as always, the minority that don't obey rules, affect those that do disproportionally

The Social Side of Things 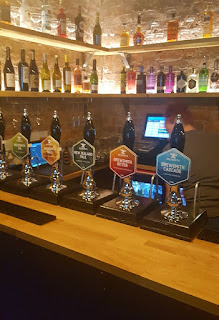 No sooner do we have one new pub opening in my area, but then we have another. Different in scale and target audience to Hogarths in Rochdale, is the long awaited - well it was trailed quite a while ago - Broad St Social in Bury. Operated by the well respected Brewsmith Brewery based in Stubbins by Ramsbottom, this is rather a neat little bar in Broad St, right in the centre of Bury, handy for some other good drinking establishments, as well as the Bus and Metro Interchange.

Situated in a mid terrace, with large windows and a little outside seating for the hardy, this is a neatly laid our bar with wooden floors, exposed brick and two distinct drinking areas, served by one fairly small bar. It somehow manages to cram in no less than six handpumps, all from Brewsmith and six keg pumps, all from elsewhere, but local to Greater Manchester.  Service during these difficult times was at table (we had booked) and on its first official trading day, was swift and cheerful. Some local worthies were there too and greetings were exchanged from a safe distance - though against guidelines no doubt. There was warmth and atmosphere which you don't always have from the git-go. 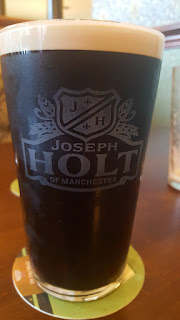 Like my friend and fellow blogger, Beers Manchester, who has also written about the bar - I urge you to read it - I thoroughly enjoyed it. In my case, not least of all because of the excellence of the Brewsmith cask beers, which have always appealed. They have the most redeeming of features. They are always carefully and well brewed, and they have the cleanliness that allows you to pick out the flavours. I could go on, but these two things are important -  to this writer at least and if you wish to judge a brewer's skill, a good - nay essential - starting point.

Our two hours were soon up, which gave me an opportunity to slip round the corner to Joseph Holt's Wyldes to try out the new Holt's Stout. Devotees of Twitter will likely know I'm a bit of a fan of stout. I regularly drink Lees Stout in its cask conditioned form at my local, the THT and at the Rose of Lancaster - another local - where I drink it à la nitro. It is superb in both forms, with its deep roasty taste, full body and luscious white head. How then would Holts stand in comparison?  Well, it isn't at all bad.  Slightly sweeter and with a darker, more tan head, it reminded me rather of Sam Smith's Stout.  All in all a good job, though it is only available in nitro form.  So still Lees for me, but don't hesitate to try Joey's offering.

We finished off in the Thirsty Fish, another micro pub and right by the bus station. All quiet here around teatime and another stout, this time from Deeply Vale, was on cask and on form, unlike Diamond Bus. But that's another story.

Not often I write much  about actual beer, so a rare treat for you here.  Bury is well worth a visit.

On the subject of Bury, I peeped in the window of the closed Clarence, which was extensively and expensively renovated not so long ago. It has new owners, but it looks as though the lovely square bar has been removed. Shame.

We didn't fancy plastic glasses at the Trackside (outside) either, so swerved that.