So. What's Been Happening?


I've been away and busy with some personal matters, so while the odd Twitter comment kept me in touch while dodging rain in Dumbarton and Albania, I have spent a little time since returning, catching up with what's been going on.  The main chatter is about brewery takeovers - well nearly takeovers in this case. The airwaves are being choked by the dreadful news that one (more) of the darlings of the crafterati has fallen off the shining path and found itself in the arms of, in the eyes of some at least, an unsuitable suitor.  Yes folks, it's the Beavertown Show.  Now reading blogs and other social media, there is lots of righteous indignation as well as a smattering of insight and pragmatism.  You'll have, like as not, read most of it already.  Frankly I can't get too excited about it. I've only ever had the odd Beavertown beer and now, if predictions are to be believed, I'm likely to have much more of it available soon as the unsuitable suitor (Heineken) makes it widely available, but at a much smaller price.  Not exactly a losing position for most. Unless the recipe changes, but that won't happen, will it?

Of course takeovers are nothing new. In my time as a beer drinker I've seen many of them. The usual thing is that it will be good for consumers. Economies of scale, a bigger organisation helping out where needed and of course, the beer will be matched. It won't change. No Siree. But of course, change it did. Or it disappeared altogether.  So there is precedent, though then it was outlets (pubs) the predator was after, but now it is brand and volumes.  The fundamental reason remains the same - to protect and increase market share - whether by acquisition and absorption - or by owning the production one way or another. Elimination of the opposition is the name of the game I reckon. Mind you, in a lot of cases in the bad old days, it wasn't usually a marriage of convenience, but a shotgun wedding, the bride having been knocked up by the suitor by way of a hostile takeover. Nowadays, the complaint seems to be that the bride was busy behind the scenes prettying up for marriage and making herself a "catch". Same outcome, but usually given the ownership, a willing partnership.

Having read quite a few comments, I'd recommend Roger Protz's take. He's seen it all before and I reckon he has the right of it. My comment on Twitter and Roger's response is reproduced below.

A final thought from me. Business is business, though the ambition to build something called (slightly pornographically) Beaverworld is given as the reason for this. Oh and a shiny new 270,000 barrel brewery as a competitor might well explain the outrage by some. In the real world though there is still plenty decent beer to go at, so move along. Nothing much to see - for the time being at least.

Another thing to catch my eye is the carbon dioxide (CO2) shortage.  CO2  is needed in reasonable sized breweries for many things other than injecting it into beer, so it might affect some of us a bit. I think though this is more good headline stuff than a real worry. CO2 will be back in a gas bottle near you soon.

Right.That's under my belt. Think I'll go to the pub tonight and see if the Beavertown is on offer yet.


Two beers that both required CO2 are shown to illustrate this article.  One is craft and was reassuringly expensive. The other was Albanian and therefore wasn't.

I do feel the pain of some. My beloved Higsons Bitter has gone forever. It still hurts. 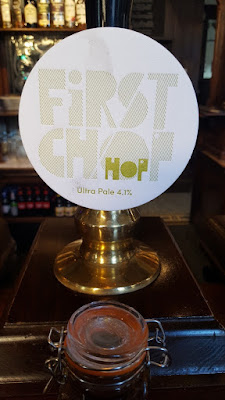 Both Merseyrail trains were on time. I'd also forgotten how big and deep underground Moorfields is. Liverpool South Parkway was also rather impressive and larger than I'd imagined. I come from a railway family and like these sort of things.
Posted by Tandleman at 16:30 9 comments