The Blog. And BrewDog Cask


I 've been neglecting this for a bit now, largely because I'm to to my eyes in the Manchester Beer and Cider Festival for which I'm Deputy Organiser, but hopefully when all that is out of the way, I'll buck my ideas up a bit. 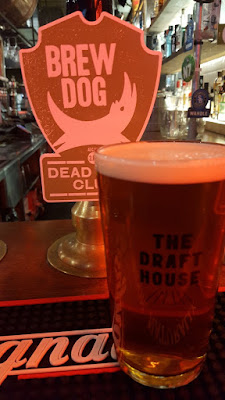 In the meantime, I forgot to give my views on the return of Brewdog to cask beer via a cask version of Dead Pony Club (3.8%) which I tried at the Draft House in Seething Lane a few weeks ago. Well I say a few weeks, but actually it was 21st November when I was last in London, so not so long ago really.

A couple of things. I wondered if there would be much change in the Draft House offering since Brewdog took them over and first impressions are that nothing much has changed. Maybe a bit more BrewDog on the bar - well definitely that - and possibly a decrease in choice in other areas - but still plenty to go at and all much as before.

I'd previously given up on the rancid cask offering here, preferring by far to drink Tankovna Pilsner Urquell. Many visits and really poor cask had put me off trying, so given that it was a quiet Wednesday afternoon, I wasn't optimistic.  Nonetheless a pint was obtained and duly supped. It was fresh, well conditioned and actually pretty good. With its malty base and hoppy finish, it was a very decent pale ale (or standard bitter since it was in cask form) which I would happily drink again. OK, it didn't set the heather on fire, but I can well understand why BD chose this and I look forward to seeing more (and more adventurous) stuff on cask from them soon, remembering as I do some of the fantastic beers they used to produce. Trashy Blonde (not an acceptable name now I guess) and Alice Porter being two I remember very fondly.

So from me, a qualified "Welcome back" and well done on sorting out the cask quality at the Draft House, though I'll be back later this week to confirm improvement has been maintained.

Don't forget to come along to Manchester Central for the Manchester Beer and Cider Festival. It will be fab and is of course very reasonably priced.

We are having a day out in Winchester on Saturday - so tips for musn't miss pubs welcome.
Posted by Tandleman at 11:38 10 comments