Draught Beer for the Hardy 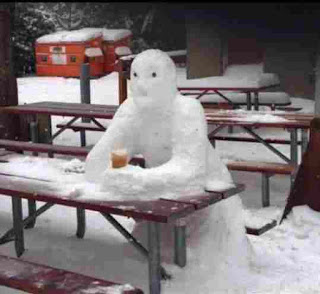 Well the big day arrives in less than forty-eight hours. Pubs will be able to resume outdoor selling of alcoholic drinks, though with the kind of weather expected, hot toddies or blobs might be a better bet than pints of chilled amber nectar - or indeed, non-chilled pints of cask ale. Only 14,000 or so pubs will open after a fashion and while many are booked to the seams - if an outdoor drinking area can be said to have seams  - one has to wonder how convivial such an outing will be, even if the weather stays dry. Fine of course if we have warm sunshine and/or a bit of shelter from the chilly spring winds, but that is a very debatable point. One has to wonder too if the bookings will remain as firm when faced with the reality of English Spring weather, as they were when reserved in optimism. I'm not so sure that they will.

Of course, we read too, that many of the outdoor venues aren't looking as Covid secure as they might be - though admittedly the chances of catching anything outdoors are minimal. This has been pointed out photographically on Twitter, and it does remain a concern of a kind.  I note too on Twitter that some local authorities are making up the rules of this new game as they go along, which most certainly isn't helpful. Light touch on rule interpretation seems to be beyond most Local Authorities' understanding of their role in life. It may just be chauvinism, but as a  career civil servant, funnily, we used to always be told to find ways of doing something positive. In fact one of the organizations I worked for had "Bias for Action" as one of its core values. That rarely seems to apply in the case of our local friends, but enough of my prejudices.

Another worry I have is the effect lockdown has had on peoples attitudes to spending money. We have rather become accustomed to not spending much, so perhaps paying pub prices again will be a shock to the system, especially if that dubious pleasure is accompanied by a freezing and howling gale.  This of course will apply to the longer term too, and it is to be hoped that we'll soon get used to forking up an amount for beer in an afternoon or evening, what we previously spent in a week or more at home.  Of course that will be mitigated if your home drinking has consisted of exotic DIPAs and Imperial whatevers, but for the bread and butter customer of most pubs, that won't be the case.

We have five weeks from this partial re-opening of pubs, and then we will be permitted inside, albeit with restrictions and table service. Another five weeks if that and then, hopefully we'll be free. Or will we? The future is still slightly uncertain and depends on the virus being curtailed to a minimum, while vaccinations are pushed to a maximum Talk of Covid passports continues to muddy the water and cause division and is likely to continue to provoke concerns for some time.

Of course, I am glad that there is a start to relieving the stranglehold the Government has put on pubs and I do hope it all works. I do hope too that at least some pubs can make some money from this. My eye though is firmly on the main prize, hopefully in June, when we can all go where we want, with the minimum of restrictions.  So, only one muffled cheer from me.

Last night, with my heaviest coat on, I had a bottle of beer in the sun in my garden.  It was pleasant. But it was a big coat. Wouldn't want to walk to the pub wearing it. But I will give the great outdoor experiment a go.

I am also concerned that when pubs re-open, it won't be long until full rent is resumed. That might well see a rash of pubs failing then, as may also happen when furlough ends. There is no doubt other pitfalls along this rocky road too.