It's a rather pretty place Haarlem. There are no chain stores here, or at least very few. Many of the shops are artisanal in some way, with painters and potters cheek by jowl with fashionable boutiques, second hand shops selling upcycled this or that, or posh clothes. All are exquisitely, no painfully, constructed, coiffured, dressed and decorated to look lovely. And they do. The canals are edged by high gabled houses, timeless in the Dutch style, but grey and austere. Instead of the merchants that no doubt once lived there, they now home lawyers, accountants and the like and have carefully polished brass plaques. But they they retain their grandeur still.

Move away from the huge main square, the Grote Markt, dominated by the massively impressive St Bavo Cathedral and at right angles to each main or side road,  you observe ever so quaint streets of single storied terraced cottages. In London they might be called mews, though these are not exactly the same, but probably here as in London, some at least were built for servants of the rich and likely for their horses too, as yards abound.  This was and still is a wealthy city.

Around the main square there are a number of bars and cafes with tables and chairs outside. In late March, the weather, while bright and sunny, still has a winter chill.  The Dutch though are hardy and fill every chair, while young men and women scurry about waiting on them. It is an impressive sight. At just after one in the afternoon, there isn't an outside seat to be had.  The customers are a mixed crew. All ages from young to very old are represented.  The older folks generally drink wine and are very well dressed. The young men and women are fashionable and cool. They smoke furiously and mostly drink beer, though iced tea and soft drinks are also evident. Middle aged folks drink beer. Abbey beers from Belgium are common and popular, the tables dotted with Affligem and Grimbergen bottles and glasses. Some sophisticates even drink Duvel Triple Hop, though with a plane to catch I was warned off that very firmly. Belgian beers abound, though the odd Gulpener brings a touch of Holland. Whatever they are drinking, young or old, you can feel the money here. 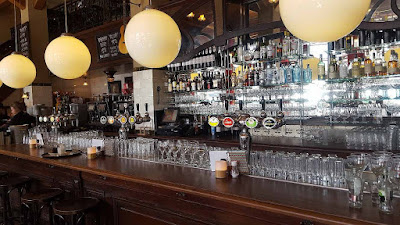 Picking the grandest building of all, we nip into Grand Café Brinkmann. It has been serving the population food and drink since 1879 and is all big windows, marble floors, solid wood, chandeliers and has a massive staircase and gallery. Most important of all though, it has a very impressive fin-de-siècle bar, which to my eyes at least, is the centrepiece of a wonderfully characterful room.  From the warmth inside we were able to watch the much-tougher-than-us souls outside, with the added bonus of observing the very dedicated young waiting staff working at lightning speed to serve the hundreds outside with food and drink. It took a little time for us to be served, but the apology for the delay was so charming and the place so interesting, that didn't ruffle any feathers at all.

As sipped our beers - Hertog Jan for me and Jupiler for E - we people watched while the whole scene buzzed around us.  Better than outside? You bet. The beer choice was overwhelmingly Belgian and that seemed just fine with the customers. We stayed for two, but I had the surprise of a further beer being sent over by way, I assume of an apology for the delay in service.

This was a classy place to go and we only wished we'd known about the inside before our last few hours. More homework and I might just have got that Duvel.

Don't expect cheap beer in the Netherlands. Even in the humblest of places you'll pay €3 for 25cl of cooking lager. That's £6 a pint at current exchange rates. For anything grander, anywhere from €4 upwards.

Next time I'll mention Dutch craft and a proper Dutch working man's pub.Guess which I liked best.
Posted by Tandleman at 16:30 5 comments


I recently did a little poll for a bit of fun, but of course it had, underneath it, a serious point. Here's the result:

Now of course if you really like pubs it's a no brainer. When you think of it logically, why if you really like beer above all, would you go to the expense of visiting a pub and endure the mark-up when you could merely find the required beer at the best price and sup it quietly in the comfort of your own home?

Now of course this would be an unusual way to look at things - though not out of the question as a minority of beer drinkers for whatever reason don't frequent pubs -  and in any case many people pointed out, that it can't really be a great pub without great beer. That though isn't at all so certain.  Great beer is always in the eye of the beholder, as to a lesser extent are great pubs, though likely the latter is more easily identified than the former. (Mudgie uses the word "congenial" to describe his required atmosphere.)

On that slight tangent, there can also be the more neutral "unthreatening" and while old hands like me and Mudgie can (mostly) tell a pub where you might be in danger within a second, others might not be quite so keenly tuned in.  Of course a boisterous or indeed a clearly cliquey atmosphere rarely conveys a feeling of danger. Danger is probably best described as the" absence of normal" and your instincts tend to kick in in such situations. Mere boisterousness can usually be quickly rationalised too and most of us old soaks often understand the warning signs before even setting foot in a dodgy pub. These can clearly only ever be described as convivial by the sort of people you wouldn't ever want to drink with.

But I digress, so back to the main question.  Mudgie sums it up quite well, as he often does:

To my mind, that's a very good rule of thumb.

Not to be outdone, Mudgie followed my poll up by:


Now in some ways this seems to contradict my poll, as here great beer wins out. I suppose the difference may be that I ask about "fantastic" and Mudgie asks about "dull". Think about it a bit more closely and it might well just be down to terminology. In Mudgie's case this is a less binary choice, as it means you are in the pub anyway.

So do good pubs and good beer go hand in hand? On the balance of probability - yes - but in beer and pubs, as in everything, the rule isn't hard and fast.

Of course being a cask ale kind of guy, pubs are essential to my sort of drinking.  So I'm biased both by inclination and neccessity.

I don't know so much about bars though, but that's for another time.
Posted by Tandleman at 15:10 12 comments