I was invited to take part in an impromptu tasting of old beers behind our bar at GBBF. I use the term "old" deliberately. These weren't "aged" beers in the sense that they hadn't been kept carefully in a cellar, or some such controlled environment, with a view to tasting them at a later date. Instead, they had come from God knows where and ended up in a CAMRA stall at the beer festival.  The carefully controlled conditions they had endured are unknown, but most likely consisted of years of neglect somewhere  or other, before ending up being donated to CAMRA, where the most controlled environment waslikely to be a cardboard box on a non temperature controlled warehouse shelf. 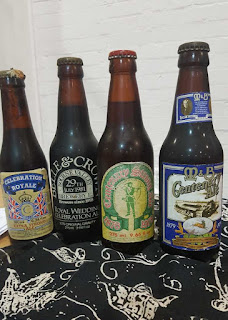 We wondered if we were in for a gourmet vinegar session and as the first bottle, M&B Centenary Ale from 1979, was opened with not a hiss, we feared the worst. To our surprise, the beer had loads of carbonation and was as clean as a whistle on the palate. Sherry and dark sugar notes dominated in a good way. It was perfectly drinkable.  One of our company remarked that this bottle of beer was brewed long before he was even a twinkle in his dad's eye. Sadly I couldn't say the same, even if then, by way of compensation for that melancholy thought, I had a lot more twinkle then than now.

Our next bottle however wasn't quite so good.  Centenary Ale from Home Brewery of Nottingham hadn't endured the years as well. Brewed in 1978, it was still conditioned but exhibited distinct marzipan flavours, as well as considerable stale cardboard notes. You can't win 'em all.

Our next two were really rather good. Both were well carbonated and again showed rich sherry/port like notes. Both were brewed to celebrate the marriage of Prince Charles to the late Diana Spencer. Royal Wedding Ale (1981) from Bourne Valley Brewery was first of the final pair. This was rather a nice bottle with a fired on label. Plenty carbonation again in this one, from a brewery which was then only three years old. (Brewing started in 1978. but, sadly, brewing ceased in October 1985 following a split in the partnership behind the brewery.)  We finished off with Celebration Royale from King and Barnes. King and Barnes were taken over by Hall and Woodhouse in 2001 and the Horsham Brewery closed.  They must have known what they were doing though, as this may well have been pick of the bunch, though it mirrored the M&B in many ways with its rich fortified wine flavour.

This was an interesting little interlude and  it was good that the surprises were mostly pleasant.  Why not have a root through your cupboards? You might just enjoy that old bottle that you find, but even if you don't, you are drinking liquid history.

Our host my colleague Ian Garret sourced these beauties for around a pound a piece from the CAMRA memorabilia stall.

I have quite a few old bottles at home. One day maybe.

Not So Brown and Boring?


On Thursday night I was out with an old mate of mine from the USA.  We met in the Blackjack Brewery Tap and after a couple of very decent beers my companion fancied a change.  "What do you fancy?" I asked? Now he had spent the afternoon enjoyably drinking at Runaway and Cloudwater and wanted something a little plainer and simpler.  "Any Holts or Lees nearby?" he asked? 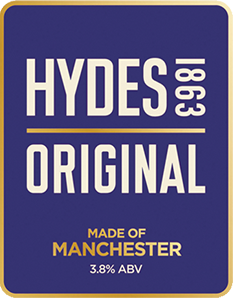 We adjourned to the Hare and Hounds on Shudehill for some Joey Holts.  This is a splendidly traditional little City Centre local of the type that used to abound, but is now a relative rarity. The Holts was in splendid form and slipped down easily as we sat in the front room, catching up.  Time was against us, so we nipped round the corner to the much more recently opened Abel Heywood, which although quite traditional inside is only a few years old as a pub. Hydes own this and we settled on Hydes Original which in another era would likely have been plain old Hydes Bitter. My friend declared it even better than the the Holts. He enjoyed very much the balanced malt and hops and the easy drinkability of both beers and he remarked how he really appreciated these kind of beers which are rarely if ever available in his native Pacific North West of the US.

By now it was approaching 11 o'clock and the next port of call, the Millstone, for Lees, sadly had to be abandoned. T'internet said it closed at 11 and we didn't want to miss a final pint before I got the last bus. So, more Hydes it was, this time the excellent Lowry, much more modern with Chinook and Citra hops, but unmistakeably British in its malt profile.

And that was it, excellent Manchester brewed beers from brewers who have been around from 1849 and 1863 respectively showng that to an American beer writer and beer aficionado, that they can stand proudly against the modern brewers that we are  lucky to have so many of in Manchester.

We shouldn't overlook them or take them for granted.

My companion was Don Scheidt who I have known for many years. Read some of his stuff here. He is by no means the first American beer writer who has made a similar observation about our most traditional of beers.

As we walked to the Hare and Hounds, a fellow pedestrian approached. "Hi Don" he said.  He was a brewer from Runaway, who a tad ironically knew Don, not me.
Posted by Tandleman at 12:40 1 comments


Bad Reichenhall is a charming little German town in the Bavarian Chiemgau Alps, noted in the past particularly for salt production. It is the capital of Berchtesgadener Land, set in spectacular forested countryside, not a million miles from Salzburg.

I first encountered it many years ago, cycling to it from the Alpine resort of Inzell in what can best be described as pissing rain.  It was in the early days of my long-lasting, but now defunct German cycling holiday phase and one of only two times I forsook the bicycle we had paid so much for. Both were for the same reason - the aforementioned pissing rain.  Our destination was Berchtesgaden, another charming (in a kind of colder way) Bavarian town , probably best known as the home of Hitler's Alpine redoubt, the Obersalzberg and its Kehlsteinhaus - also known as Hitler's Tea House. 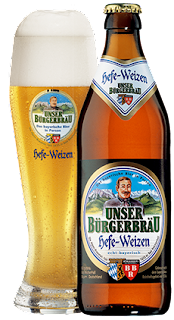 After a horrible slog, in a torrent of rain, up countless Eiger like hills, we arrived, knackered and soaked in Bad Reichenhall and made for the nearest pub for much need liquid refreshment. I remember the relief and I thoroughly enjoyed the cloudy hefe-weizen brewed by the pleasingly named Unser Burgerbrau.  How do I know what I drank?  Well somehow, the distinctive glass - perhaps to cock a snook at the appalling German weather - found its way home with me and it took pride of place in Tandleman Towers for quite a few years. Back in Bad Reichenhall, we looked our maps and the waterfall of rain outside. Noting that the railway station was near and that Berchtesgaden was to be reached by even more precipitous alpine ascents, we decided. "Bugger this, we are getting the train."  And we did. And I've never regretted that decision.

Is there more to this tale? Well yes. A few years after acquiring the glass, while in bed one morning before work, while E made tea (my job these days and ever since), I heard a horrendous crash of broken glass. I immediately knew what had occurred having drank a hefe-weizen the night before. My treasured glass, on end to drain, had taken the knock by a sightless E, who had neither glasses nor contact lenses aboard at the time.

I was reminded of this a few days ago in Berlin at the Berlin Biermeile, when among the many beer stands, we came across one from Unser Burgerbrau. I was firstly uncommonly pleased that it is still on the go and secondly, I was determined, on this sunniest of days, to reaquaint myself with the thirst slaking hefe-weizen of that rain soaked day of yore.  Alas it wasn't to be. The hefe-weizen wasn't on sale.

Nor was it possible to pay the deposit and buy and keep a replacement Unser Burgerbrau Hefe-Weizen glass. They didn't have any. Some things are just not meant to be.

It peed down in Berchtesgaden that first night too. I remember sitting in the almost deserted hotel dining room, when at about 9 o'clock, the waiter returned to our table with his coat on and gave us the bill.  The rain bounced back to knee height. Escape was impossible. We were in bed by 9.30. On a Saturday night too.

Our trip to the Kehlsteinhaus was completed in glorious sunshine. Our luck changed. We were the last group to enjoy the panorama (2600ft) before fog swept in rendering the views invisible.