Cheltenham and a Moan 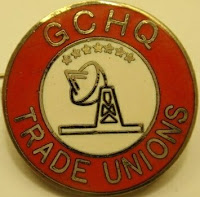 When E and I used to go to Cheltenham many years ago, it was to the annual rally in support of sacked workers from the Government Communications Centre (GCHQ) based there. We also had a few libations, but sadly though I remember drinking Wadworth's, the nature of the pubs is long since forgotten, though the reason for being there isn't and won't be.


Last Saturday though we went to visit two free houses. Firstly to the Kemble Brewery Inn which was a busy back stree 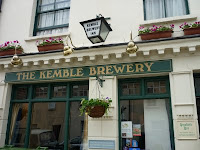 t local holding a music festival. We were greeted at the door by the newly elected Lib-Dem councillor who had fought for them to get a licence for the event against local objections. I had a chat with him. He explained that the objections had been on noise levels, lateness, frequency of sets etc. He had proposed and agreed some restrictions which both the pub and the objectors had agreed to. Good for him. I was in the front of the pub and could scarcely hear the music at all, so it must have been a successful compromise, though one or two locals remarked that they'd have liked it louder. All well then? Not exactly. Another restriction had been placed on them. All liquor had to be sold in plastic glasses. "Had glass been a problem I asked?" Not as far as he knew was the answer.

Now I hate drinking out of plastic. I hate even more these petty bureaucrats who decide, on no evidence whatever, that the freedom of others should be restricted. I can just about understand it where certain places have a record of glass based violence or vandalism, but to have these "just in case" restrictions without evidence is just too much for my sensibilities. Unremitting brown beer didn't help either, but my gloom was lifted by Thatchers Scrumpy and the sheer friendliness, not only of the councillor, but the chatty music loving locals.

Our last Cheltenham stop was a bigger venue, the Jolly Brewmaster. This was bustling and boisterous but the beer choice was again brown, though I recall the ubiquitous Deuchars IPA. No matter though. The company was good and having given up on beer for the afternoon, pints of the now familiar Black Rat were enjoyed instead, providing a pleasant end to an interesting afternoon.
Posted by Tandleman at 09:32

When I was a student, the college bar introduced plastic glasses called Skiffs, which were universally hated. No one had been glassed; it was just to cut down on breakages. The Skiffs were almost indestructible; many methods were tried but only one worked, throwing it on the bonfire on the 5th November. After a while, the bar relented and brought back real glasses.

I too remember the dreaded "Skiffs" from my student days. Although the Student's Union bar at Salford University only sold keg beer back then, these awful plastic "glasses" still manage to spoil what little taste there was in keg Tartan and Tetleys! We too hated them, and as you point out RedNev, they were virtually indistuctable. (As a chemist I ought to have noted what plastic they were moulded from - probably something nasty that leaches all sorts of carninogenic chemicals into the beer!).

To return to the main thrust of the blog though, this is yet again another example of "elf & Safety" gone mad. I read somewhere that the Cardiff Beer Festival was also being forced to use plastic glasses this year, owing to an Oasis gig taking place in the stadium next door - and I thought Mancunians were such nice people! (Do glasses end up being thrown at gigs, or is this another "just in case" scenario?)

Seriously though the whole thing is bureaucracy gone mad. People deserve better than this from local government, who after all are funded by the taxpayer. They'll be forcing pubs to sell alcohol free beer next!

Your Lib-Dem pal is a councillor for a different part of the town. Yes, there was a significant amount of broken glass in the street (narrow & residential) on previous occasions. This gig was much better than past events, but prob more to do with the couple running the place putting some thought into it, rather than actions by this guy. Sorry - anonymous rant over - great pub, good beer

I feel the need to correct a factual inaccuracy.. The Lib Dem councillor... If he claimed that he had agreed restrictions with objectors, that is utter nonsense. All restrictions were agreed with the council and police and this fella had nothing to do with it. Sorry, but I hate it when politicians try and claim credit for something they didn't do.

Event was a lot better than previous years and landlord actually wants to do things the right way.

Your visit to the Jolly Brewmaster must have been a blur! Not sure how Hopback Summer Lightning, Hooky Gold and Dorothy Goodbody's Golden Ale classify as brown beers. No sign of the ubiquitous Deuchars IPA since April.