The Map Room and Hop Leaf 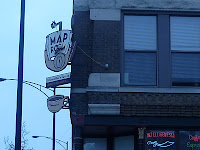 dness I was pretty well OK on Friday morning. After a "wherethefuckamI?" kind of wander round near my hotel, I was having coffee in one of the many coffee spots in Chicago, a town that seems to take its coffee seriously and contemplating breakfast, when my phone rang. It was Jeff. "We are meeting for lunch in the Frontera Grill at 11.30." What? Lunch at 11.30? Still when in Rome. I didn't know this of course, but this is one of the most sought after places in Chicago. My mate Ryan, a noted foodie, was practically purring. It was simply fantastic and made so more by the good company and the fact that we had a reserved table for nine, while queues snaked outside the building and onto the street. You want some details? My friend Jeff's blog has it here, though my cocktail(s), recommended by Ryan were stunning. Base of tequila with green chilli, cilantro and lime juice among other stuff I can't remember, it was the perfect pick me up.

But man cannot live by refried beans and tequila alone, so we hit the train and off to the Map Room which isn't a brewpub, but a proper boozer and a bit of a classic. Long and low ceilinged, with big windows and festooned with world flags and an oddly distorted map of the world on the rear wall, it has a great atmosphere, though oddly much less in your face service than is normal. And if you are going, bring cash. Unusually the credit card, a 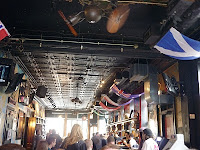 mainstay everywhere else, is not accepted there. Allagash White for me for the first three or so, a classic Belgian Wit which ticks every box. Then on to Alpha King while getting and giving tastes of various others from Sour Belgian style Bokor Flemish Red through to Imperial IPA's barley wines and more from Arcadia, Lost Abbey, Dark Horse and Metropolitan. Some of the boys then went off in search of Italian beef sandwiches (where did they put them? I was stuffed) while a few of us kept the Alpha King tap red hot. I reckon the Map Room is my favourite pub in Chicago and probably one of the world's top twenty. Not cheap though and a strong will is needed to cough up fifty bucks or so a round, (plus tip) but a great place.

Then a complicated taxi ride to Hop Leaf which was literally full to the rafters, as the upstairs room is in the eaves. Some o 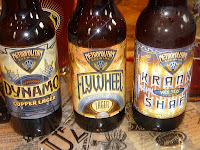 f the Italian beef brigade didn't like it for reasons best known to themselves and fled to the Clark Street Ale House, but those of us that stayed were rewarded not only by wall to wall totty (much more conservatively dressed than at home) but by Alpha King, Dogfish Head Raison D'etre, Bell's Brown Ale, Metropolitan and a host of Belgians, ignored by us except for one aberrant round of Timmerman's Peche! Another great bar, but maybe better on a quieter night.

And so ended day two for me, though the rump that went to the Clark Street Alehouse were apparently chucked out at four a.m. closing, by which time I had been in the Land of Nod for at least two hours.
Posted by Tandleman at 18:25

Chicago native here. This set of posts is funny to me as you've pretty much named all of the places I frequent in this city. Piece, Hopleaf, The Map Room, Revolution, Frontera... these are all places I would personally recommend to people visiting from out of town (although it's really tough to get into Frontera, especially for dinner). Clearly, whoever was guiding you around Chicago knew what they were doing and I'm glad you were able to hit some of the better places this city has to offer. Did you try some stuff from Founders brewery while here? How about Great Lakes or Capital? Three of my favorite Midwestern breweries that you've not yet mentioned. Also, did you happen to go to The Duke of Perth ( http://www.dukeofperth.com/ )in Wrigleyville? The DoP may not have too many beers or scotches that would interest you (they're almost all Scottish) but would be interesting to see what someone from the UK thinks of Chicago's version of a Scottish pub...

David--a couple of these very serious beer geeks lived in Chicago for a while, IIRC, back in the 90s. So yeah, they know the shit. And the group had a precursory long weekend there in 2003, a practice run without Frontera and Hot Doug's.

And I have no idea how this Twitter thing works, but I see Tandy's wondering about catching a cold on there...symptoms of a cold don't show up 4 days after flying. If you catch a cold flying, you come down with it within hours. Maybe a day, or on the very outside, 2 days later. Sounds like a Mancurian bug.

Gullet as much water as you can stomach!

Nick - Three days to incubate a cold I recall. Anyway it isn't so bad today.

David - What Nick said and anyway 15 mins on the internet would give you the best pubs.

And no, this Scot wouldn't be going to an ersatz Chicago Scots pub.

* failed attempt to get into transatlantic spirit of your posting

"Belgian style" usually suggests a beer made in the style of a Belgian beer without actually being made in Belgium, don't you think? The Bokor beer you encountered is made in Belgium therefore the word "style" is superfluous.

Hopleaf was far too crowded and stuffy for my taste, especially after sitting all afternoon at ease in the Map Room. I have lower back and knee issues that make standing for any length of time very difficult. Those of us who left were also uninspired by the beer list, which leaned heavily toward Belgian beers, all of which are available here at home. Clark Street Ale House got us a table and some very decent regional beers (primarily Bell's Two Hearted).