Three of the Best


It was one of these days when you encounter the beer you want to drink at the peak of its condition. To get one in a pub that is just perfect is a pleasure, to get two is the icing on the cake and to get three is the cake itself.

I'd been put on the edge 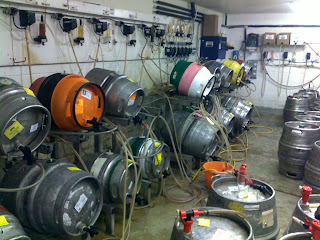 of annoyance though earlier on Saturday by a tweet about Wetherspoons in Derby and the twit (sorry twitterer) feeling "unclean". Well here's some simple advice which works every time - "Just don't go there". They'll hardly miss anyone that thinks that way, as they sell the most cask beer of any JDW in the chain. How do I know this? Well I was told by the manager of the one that is second and chasing hard for number one, the Regal Moon in Rochdale, the venue for my perfect trio of beers. Such stereotypical and snobbish remarks do a disservice to excellent managers who are rising above the norm to sell great beer in a big pub chain. JDW's, like all such megaliths, have good and bad. The good are very good and shouldn't be carelessly denigrated without an actual and specific reason. Managers such as Chris at Rochdale are dedicated to getting more and more of their regulars drinking good beer and attracting others to do likewise. If sales are anything to go by, they are succeeding. He proudly boasts that he probably sells less John Smith's Smooth than any other major JDW. That's a good thing in my book. OK - rant over. 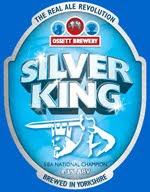 k to beer. Those of us who live up north have a plethora

of great breweries that brew cask beer that you want to drink lots of. One such is West Yorkshire based Ossett who have a super range of beers. Ossett also operate two other micro breweries and run 14 pubs. Saturday's beer was Silver King, a pale beer, using lager malt with a distinct bitter, citrus finish. It is very quaffable. Less known, but producing some of the best pale and hoppy beers in the north is Millstone from Mossley, nestling in the

Lancashire side of the Pennines. True Grit is full bodied, bitter from the late addition of hops, with a distinct and lasting hoppy finish and is very, very drinkable. It was on top form on Saturday and provided a perfect route map along with Silver King to the piece de resistance, Jaipur IPA. What more can be said about this classic beer? Nothing really, except to say I've never had it better. It was truly, unutterably and dangerously delicious.

An excellent day was finished off with a tour of the Regal Moon's impressive cellar, part of which is pictured above.
Posted by Tandleman at 12:33

Labels: Getting it Right, Good Beer, JDW, Rant
Email ThisBlogThis!Share to TwitterShare to FacebookShare to Pinterest

(Sigh). I've really got to get back to the old country some day for research.

I have somewhat of a fetish for other peoples' cellars (oo-err), it has to be said that JDW do cellars well, and they are usually rather clean - after some of the cellars I've visited elsewhere I would think twice about drinking in the pub again - think raw meat on top of casks...

As for the beers, it sounds like you had one of the 'does it get any better than this?' days that I so love about cask beer.

Ossett Silver King won beer of the festival in Southport a few years, which necessitated a trip to the brewery to present the certificate. A fine beer and an interesting day trip.

Christ--how many handpumps are there? And is it me, or is that an awful long length of hose for the beer to go through? And what are the contraptions mounted on the wall?

Supposed to be a natural product!

It's got me pining for my next visit, probably the end of September. Never been to Rochdale before...

He has 18 handpumps. The length of the pull isn't actually that long.
The contraptions on the wall are fob detectors - just an inspection chamber with a release valve.

I've had all the reports in now and it does seem as if you enjoyed yourself very much indeed. Only complaints I had were about plastic glasses in the Flying Horse.

I didn't get past the Regal Moon.

Exactly-you had a very good day:)