That's me most of this week and this weekend, so I hope to get round a few of  the new wave of boozers, some of which I've been to before and some which I haven't. Now regular readers will know I have what might be termed as a healthy pessimism about drinking in London. Some in fact, might call it downright predjudice, but I do remind readers that this caution is from bitter experience, pun most definitely intended. But things are improving, so maybe that will change? 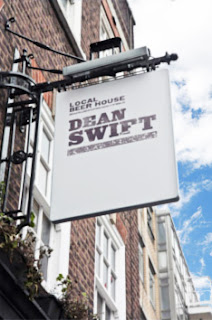 The Dean Swift is a mere 15 minutes walk over the river from our London abode and nestles behind some of the new stuff that is Shad Thames. It's a neat little boozer that crams a lot into what isn't a big space. I liked it straight away. Various posh keg beers are offered along with three (on this occasion) cask ales. I had the rare Kernel Citra which was good, though maybe a touch warm and slightly over vented. We ate there too and thoroughly enjoyed it. The place buzzes, has excellent staff - very chatty and extremely welcoming - and is well worth another go.In fact I'll be very surprised if I'm not in there again over the weekend. Next up was an old haunt, the JDW Pommeler's Rest. I quite like the bar here which is very pubby and usually has a good range. Tonight was no different with beers from Westerham, Sambrooks and Thornbridge.  The Jaipur was on form and at cellar temperature, but the old JDW fault of agonisingly slow service is very evident here.

Next a mistake. Against E's advice I insisted we walk the 50 yards to the Draft House. This is a very likeable modern place with a great feel to it.  The food looked marvellous too, the barman was helpful and willing, but sadly the cask beer was poor and expensive. That's the third time that's happened and I am giving up on it, which is a shame as I can walk there in no time at all. If they don't want to put the effort into cask, then don't sell it. The  "I told you so" from E was fair enough in the circumstances.

Yesterday I went to see Jeff Bell at his gaff. I warmed up with a quick visit to the JDW Crosse Keys. I like the sheer grandeur of this place, it's great for people watching and 18 handpumps would give enough choice for most you'd think.  Not if your bag is pale and hoppy it wouldn't.  Next the Castle in Furnival St, which I also like, though the beer choice was again unremittingly brown and black.  Milestone Lion's Pride was decent enough, but uninspiring. Then, glory be, a new discovery. It has been noted elsewhere that Nicolsons are upping their game. The Sir Christpher Hatton had a nice feel to it despite being just below pavement level and had a barmaid who didn't bat an eyelid when I asked for my Jaipur to be sparkled. "I've been trained in that" quoth she. Well done indeed and a fine pint to boot.  Training eh? Who'd a thunk it?

In the Gunmakers Jeff was ebullient as ever and the time flew by, sustained by excellent pints of Purity Mad Goose. This is a perfect supping beer, with biscuity Maris Otter malt, lifted by spicy wheat and a gentle touch of noble hop, finishing with a good degree of bitterness from the Willamettes and Cascade hops. I love this pub and this is in no small part down to Jeff. The beer is always spot on too.

So a mixed couple of days, good and bad, but mostly rather good. Things are indeed looking up. Today I was thinking of a walk to Mason and Taylor on Bethnal Green Rd or a bus to the Jolly Butchers, but neither are open until four!

Jeff did tell me one very interesting thing. The Purity ales will now always be served with a sparkler. The brewery like it that way. Good.
Posted by Tandleman at 10:26

Labels: London
Email ThisBlogThis!Share to TwitterShare to FacebookShare to Pinterest

Sod the beer, get yourself down to Covent Garden for some breast milk ice cream:

Very interesting post- both the Dean Swift and the Gunmakers sound fantastic - Purity Mad Goose is a desert island beer of mine, and good to see Nicholson's making the effort in training their staff -the sort of basic block on which quality and consistency can be built. All in all, it puts me in the mood for planning a future trip london-ward.

I have been to The Draft House in Battersea and it was quite good. On a side I asked a barman in kensington why there was so much Purity Mad Goose around and i quote " they are knocking out really cheap to alot of pubs, thats £7.20 " For two pints!

Good info. I'm revisting London later this year for the first time in close to a decade. So I'm glad to read any info about where to find good cask ale. Thanks.

What did you lot eat at the Dean Smith? Menu looks nice enough and not terribly expensive.