I've been busy with this and that including family illness, but of course beer has featured. A trip to Glasgow brought two bonuses. Firstly the beer revolution (a real one) that has been sweeping through the Nicolson's chain has reached the immensely handy for Glasgow Central Station, Drum and Monkey.   Pints of Jaipur on the way to and from my Mum's were both excellent and reasonably priced. Now up to six cask beers are offered which is good news. Nearby,  I used to like the huge and imposing former Bank of Scotland building that is now the JDW Counting House, but the beer range has failed to impress on my last few visits. It seems stuck in a dark, sweet, Scottish  beer groove, chosen from a select band of breweries, most of which need a kick up the arse. On my last visit a few weeks ago, I noticed that a new JDW was being worked on a mere 20 yards or so from the Counting House.  Camperdown Place is now open and offers a very decent selection of beer in a pub that is most unJDW-like. A very fine spot for a quick pint before descending (or ascending depending on destination) into Queen St station. Acorn IPA did not suck at all.

Back on home ground, I introduced the lovely E to the Port St Beer House. On Friday night it was healthily busy and while unable to paint  a surreal picture of it for you, I was, not for the first time, slightly underwhelmed by the cask beers on offer. Not the condition mind you which was and has been on every visit, excellent, but am I alone in thinking that Prospect and Boggart are less than inspiring choices? That and  Lord Marples, the runt of the Thornbridge litter made my beer selection easy.  I was completely impressed by Hardknott Dave's Interstellar Matter, a porter of considerable complexity and poise, which deserved more than just a second half, but I was limited severely by driving.  E was less than taken with the keg Sierra Nevada Pale Ale, that she thought tasteless and gassy and as she remarked, not a patch on the bottled version.  She also  remarked on the almost complete absence of beards among the fairly affluent customers and then wryly added that "you can't say that about the bar staff".  Indeed all four men sported beards of which Jim Morrison or indeed Ulysses S Grant would have been proud and were as hairy as their customers were not. Not sure what that does to those who like to stereotype. All offered fantastic service though and I must put on record that unfailing good service has been noticeable on my visits so far. We will keep coming back, so another winner, albeit qualified by a niggling concern about cask selection, though of course I accept fully that I may just have been unlucky. 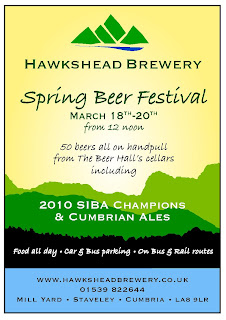 On Saturday a trip by coach to Hawkshead Brewery to their new Beer Hall. Well ,extended Beer Hall.  I was unable to take up the opening day invitation, by my wish to have E accompany me, so ironic it was, that after all, she had to stay at home with her unwell mother. Still with Tyson and his coterie, John Clarke, a clutch or Marble and ex Marble brewers and many others I know, it was still a fine place to be.  The investment here is tremendous and the beers were, as Tyson reports, unfailingly good and served to perfection.  I want to proclaim Hawkwshead as one of the most underrated breweries in the UK. Their range is superb, their attention to detail second to none and the presentation of the beers absolutely spot on. "Quality in everything" could be their motto. Seek them out.  I worked my way through the hard to move away from Windermere Pale (3.5%) dominated by Citra and drinking like a 4% beer, to the wonderful, full bodied and bitter Lakeland Gold and then to Citrilla with its cunning and stunning blend of Citra and Amarillo hops.*

So to copy Tyson.  Beer of the week: Hawkshead Citrilla.  Pub chain of the week, Nicolsons.

*I missed out on Stringers Yellow Lorry and Fyne Ales Jarl. Rumour has it that Tyson supped the last of both.
Posted by Tandleman at 10:27

Labels: Glasgow, Manchester, The Lakes
Email ThisBlogThis!Share to TwitterShare to FacebookShare to Pinterest

Rumour may be right:)

We were at Port Street on Saturday afternoon and I have to say that I personally didn't like the Hardknott much, but I did enjoy the Leadmill Niagra. We then went on to The Molly House (3 Beartown beer + Deuchars) and then Gaslamp (Saltaire Raspberry Blonde & Two Towers Mild & Brazen). It's great to see newly opened, fairly trendy bars putting cask ale on. All four I tried at the last two pubs were in great nick as well.

I had a good taste of the Niagra. It needed some viagra to give it a lift I thought.

Have to say that I'm not a fan of Leadmill beers generally and, in that respect, Niagra didn't disappoint me. The one trick PSBH is missing is having a guaranteed winner amongst the cask beers.

in manchester for a couple of days soon, was going to do my favourite The Marble plus Port street , City arma and vine. Can you recommend any others? Is Bar Fringe good?

The Angel (ex Beer House is worth a look if at the Marble. I'm not a fan of the Fringe Bar really or the Smithfield across the road but others disagree.

The Bank is good plus the Waterhouse and any number of others.

Sounds as though you've had a good time in your mother country, but I think Prospect beers are generally good.

Always good to see you, especially in the shadow of Hawkshead's new 100hl Moeschle tanks (almost as nice as ours), but did you have to leave so early?

Well of course I had been there for hours before you got out of your tent. And we had Stopwatch Sid in charge of our coach.

Good to see you too and the tanks are bloody lovely.

coxy - I wouldn't bother with the Vine unless it's changed a lot since I went there, and I wouldn't class the City as a must-see. 57 Thomas St is worth seeing for novelty value, and (unlike our host) I'm a big fan of the Smithfield. I'd say the Marble Arch, the Angel, PSBH and the Castle (Oldham St) are the ones to fit in; also the Micro Bar in the Arndale Market for bottles to take home. More central Manchester drinking here.

If you like great pubs, the City is a must.

The City was a great pub 15-20 years ago. The beer range has improved since then, but not much else has.

I'd say the City is much better than it was 15-20 years ago. Beer range has improved for one thing, but it's a pub that has really benefited from the smoking ban. People used to just call in for one as the fug was so bad, but now you have a much better, more inclusive, atmosphere.

Thanks Phil, will try, must say always like The City but the Vine is worth a miss we those other suggestions. I thought I might pop over to Chorlton where I lived briefly twenty years ago too.

Well, I preferred the walls without mottoes all round them - and I miss the sausage and egg barms.

Coxy - you'll see some changes in Chorlton! The Beech Road Guardianista enclave has spread all the way up Manchester Road, up to where the Seymour used to be and beyond. There's talk of putting in a checkpoint as you go in to Old Trafford. I did a writeup of some of the pubs of Chorlton last August/September on my blog - although I didn't include the two I'd really recommend, the Horse & Jockey and Electrik.

Nice to see the Hawkshead love. Never - ever - had a bad beer from them. They are steadily improving, i think, too.