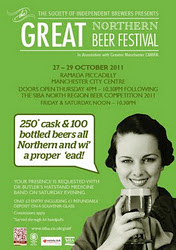 For the second time Manchester is hosting this prestigious event, with beers being exhibited by most, if not all, SIBA North members. There is a new venue too, at the Ramada Piccadilly Hotel (though since booking, it is now actually the Mercure Piccadilly Hotel - hotels change hands a lot) and bang in the centre of the city. Publicity has been a lot better this year too - we do learn as we go along - so combined with that and a new and reduced pricing structure for entry, we should hopefully see a huge turnout. All cask beers will be served by handpump and will be sparkled and served with a tight Northern creamy head, as the brewers and God intended.
The festival itself is a joint venture between SIBA (Small Independent Brewers) and CAMRA Greater Manchester, with SIBA underwriting the event, providing the beer (of course) glasses and cooling equipment and running the beer judging competition, and CAMRA who are providing the cellaring, bars and staffing. The cellar is huge with 250 or so casks racked in a temporary facility above the serving area. Cellar technicians are, as I write, running cooling pythons from above and installing the handpumps. It is a rather unusual arrangement, but hopefully it will all work.

My modest role yesterday was to ensure that the racked beers were in the correct serving position, stable and ready to be cleaned before tapping and venting. Tomorrow I'll be doing Health and Safety checks, as I will on Thursday before we open to the public and throughout the event. I'll also be a judge in the beer competition and looking forward to that too.

It really is an immense and complicated thing to organise, but I rather fancy it is going to be great. If you are coming along, do come and say hello. If you are not coming along you'll be missing a treat.

This also provides me with a chance to try Hawkshead New Zealand IPA at last. Hooray. I also have my eye on a few interesting bottles.


ENTRY:
£3, INCLUDING £1 REFUNDABLE DEPOSIT ON A SOUVENIR GLASS
Concessions Apply
Posted by Tandleman at 12:24

Hopefully any under-conditioned beer will be sent back to the brewery as ullage rather than made even flatter by sparkling it.

Barm. Tsk, tsk. It is a bit of a blind spot of yours that. Still, each to his own.

Dave - Would I spot all these wildly clashing flavours? (-; Worry not. I didn't apply to judge that category.

Good do last year and looking forward to a trip over on Saturday. Couple of quick questions, is there a separate list for the bottled beers and are we ok to take a few for the train home or are they for drinking onsite only?

Paul - I think there will be a list and I'm pretty sure you can buy them to take away.

Great, hope the rest of the setting up goes smoothly, cheers

I'll see you there! Have fun with the health and safety!

That, and this anonymous was from me, Real Ale Girl, by the way. Love my blackberry but it just can't cope with blog comments! Shea