The new landlady is now fully ensconced in the pub and getting things moving again. I've mentioned before how when there is a change or impending change of licensee in a locals pub, how it has a very unsettling effect on us regulars. We worry about the beer, who they'll try and attract, what changes will be made and a thousand other trivial things, though mostly we just put it to the back of our mind while asking of each other in hushed tones "Any news about who's taking over yet?" It is normally considered bad form somehow to ask the current incumbent, though of course surreptitiously we do. After all who would be in a better position to know?

A sure sign of things returning to normal is eggs appearing on the bar for sale, a full range of beer and the promise of Lees seasonal appearing soon. The pub is attracting its usual crowd and the casual walkers from the nearby country park. The walls look a bit spartan however, as the new landlady has yet to put her imprint on them, but we are content enough. 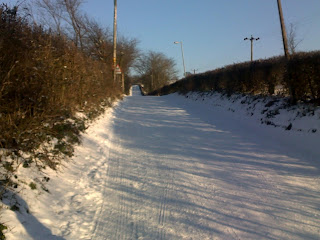 Why do we bother? It is hardly convenient, being on top of a hill, up an unmade farm road, a mile from the main roads on either side. It's a bugger to get to in the winter when it snows and not so pleasant a walk when the wind howls or it is chucking it down.  Like all people that attend a local, you can't exactly say, except the familiarity of it once you've hoofed up the lane, the calls of recognition as you enter, the welcoming roaring fire in winter, the conviviality of our friends and the usual banter and conversation is what does it I reckon. It's a little piece of publand that somehow belongs to us.

It kind of sticks with you too. I had a call from the Landlady, an ex tenant who is in sunny Cornwall on her hols. After the usual exchange of pleasantries she asked "How's the Tavern?

Read what Beer Writer Arthur Taylor said about it here. It was some time ago, but gives a flavour.
Posted by Tandleman at 10:28

Labels: My Local, Pubs
Email ThisBlogThis!Share to TwitterShare to FacebookShare to Pinterest

hows the bitter. no guinness or cider on when i called in saturday.

Where exactly IS that? I'm coming to England again in November for a couple weeks and am looking for just this sort of respite from being on the wrong side of the counter.

Yes, why do we battle to reach such pubs through inclement weather? I braved torrential rain last Saturday to get to my local, passing three other pubs on the way. It's because, although pubcos don't like this, a pub is not just a retail outlet for buying beer, otherwise we'd all just save a fortune by frequenting off licences.

I understand the new landlady after Sarah has already left.

Not sure where the pub will go from here.

Well she was certainly there at five last night as she served me.

Sadly I think this old fashioned watering hole has closed its doors for the final time.....

You may be right again. Enquiries are being made. I hope not though, I believe we have two more weeks.

Any word on a new publican for the THT yet?