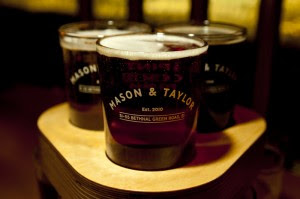 I've written before about how much I enjoy Mason and Taylor on Bethnall Green Road, London. It is handy for our flat and I've found it to be one of the friendliest of places, with excellent bar staff and a great range of beers. It embraces the best of both worlds, in that while it is undoubtedly a craft beer bar, it is one that has the good sense to sell both cask and keg beer, thus appealing to a broader crowd and of course, providing something for everyone. A bringing together of the new with the old, rather harmoniously and dare I say it, with some style and charm?

Imagine my disappointment therefore to find that the owners have not only decided to sell it, but to sell it to those most divisive of upstarts, BrewDog. No doubt the handpumps will be ripped out and replaced by ultra expensive BD plus even more expensive, imported, fancy pants beer at top dollar. Certainly a look at the promises for the future of the place on the BrewDog site holds out little hope for the retention of cask beer.  It wouldn't fit in with BDs's image and of course, it couldn't be sold at the eye watering prices that BD will undoubtedly wish to charge.

I don't know why Mason and Taylor are turning up their toes, but there can be only two plausible reasons.  Either they were losing money and this is a way to cut their losses and run, or, they were made an offer they couldn't refuse.  The twitter rumour is that they are using the money to open a new place in "Hipsterville Hackney", but who knows? So, despite the chorus of "awesomes" - is there a more annoying word around than that? - on the BD website, BD would have expanded in London sooner or later anyway. It is a great pity it had to be at the expense of rather a good boozer with a much more inclusive outlook.

I don't feel at all that this is progress. I reckon we've all just lost much more than we've gained here.

I see too that the Scottish Government has just given BD a half million quid to help them expand. Hope it will be spent wisely.
Posted by Tandleman at 08:29

Sad news. I notice that one commenter at BD asks how they're going to make it pay if Mason & Taylor couldn't - although if you look at the typical BD price range that question may answer itself.

Depends which side of the conspiracy theory you subscribe to. One thing is sure. Regulars there will be duffed up the wallet.

I agree with you - bad news.

I can go to Camden to drink Brewdog! There are plenty of other (shit) pubs that Brewdog could've taken over in East London. Variety is the spice of life and all that ...

A Scottish Beer brand who brews in Germany gets govt funding to bring brewing back to Scotland.” Something wrong with this headline.

What about the fantastic breweries in Scotland who expand organically… We’d love to see them in E London.

Since the one time I tried to get to Mason and Taylor it was shut - at 3.15pm in the afternoon - I am unable to comment on how friendly the staff were or how great the beers. But perhaps if they kept reasonable opening hours they might have done enough custom to have kept going.

Well I always take the precaution of checking opening hours before I go somewhere. I know it is annoying though to find a pub closed when you expect it to be open. It does have the opening hours clearly displayed on the front page of their web site.

it seems a shame to see your final comment in subscript after what was, brewdog fan or not, a not unreasonable reaction to losing a good bar to get another, rather than actually just getting a new one.
what way is it that you would expect them not to spend their grant money wisely? is there anything they've spent substantial money on before which has not been a good thing for beer? a dig for good reason is always ok, but a dig without basis, for a dig's sake?

WEST got a million plus. I hope they spend it wisely too. As an exiled Scot I keep a close eye on what the Scottish Government does. Politics is another hobby of mine.

As a taxpayer, I always want to see grants spent wisely. The Scottish Government will want to see the same. You look for hidden meanings where there are none.

is there anything they've spent substantial money on before which has not been a good thing for beer?

I thought cask Zeitgeist and Saint were two of the best beers I've ever tasted, and cask Trashy and Edge were both pretty fine. So going all-keg wasn't "a good thing for beer". Do you want any more?

Isn't there also a question about what happened with the original Brewdog Shoreditch site? Or was there ever one?

I don't think I ever knew that Sid. If I did, I have no idea where it was meant to be.

I agree about 'awesome'. I blame shows like Buffy the Vampire Slayer for introducing American teen slang into general use over here.

I'm with you on this Tandy. I had my farewell party at M&T just a few weeks ago. The venue was packed. I liked everything about the place and it's a shame to see it now disappear from the London beerscape.

I thought the M&T model was one that could and should be replicated in towns across the country. As you pointed out, something for everyone; the resurgence of the local.

I like BrewDog Camden and would always be pleased to see their brand expanding but why did it have to be at the expense of another craft beer bar?

Every single BD beer I've ever tasted has been utter shite.
And expensive utter shite at that.
But you can bet they'll be open at 3.15pm - any pub that closes during the afternoon deserves no support.
Where else is a chap meant to drink his pong when he's supposed to be on an errand for the missus ?

I went in twice and frankly, I've had the total opposite experience to you, both times. This may not be the worst thing in the world to happen to it, although I'm not sure that London needs another BD bar just yet.

Achieving consistency is quite difficult. Irrespective, I would prefer M&T.

I was never fully convinced by M&T - on my (few) visits I found the condition of the cask beer to be lacking.

Strictly Division Two (or Championship if you'd prefer) in craft bar terms. Sad to see it go as if offered a bit more choice in an area that is lacking...

Ted: They got better. My earlier comments weren't so favourable. But I make allowances in London that they almost always over vent beer and almost always have an antipathy to refrigerated cellars.

I loved the Mason & Taylor and although I only managed to visit twice (East London seems awfully far away to a North Londoner!) I thoroughly enjoyed the excellent food, beer and most importantly the warm friendly service.

My understanding is that Brewdog intend to turn the basement into some kind of 'Brewing School' and run at as a full on Brewpub which is a good idea and offers something a little different. My best guess is that BD offered M&T a very large amount of money to secure those premises, In fact I wonder if BD can actually sustain this rapid amount of growth without generating the required revenues first.

M&T did announce on their twitter that they will be back, so it looks like there's a bit of truth in them moving to Hackney.

On a semi-related note - and one you'll find interesting - the overall impression of M&T's takeover of The Whitelocks in Leeds has been overwhelmingly positive. After a little resistance, they've turned the place around, I have to admit. Good beer, friendly staff and no stench. All good.

Leigh: That's good to hear. Whitelocks was an occasional lunchtime spot for me when I worked in Leeds.

Matt: Thanks for the comments. Interesting on both counts.