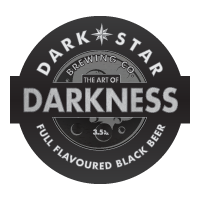 On Saturday we had our Good Beer Guide Selection Meeting at the Greater Manchester Pub of the Year, the Baum in Rochdale. As usual there was an excellent selection of beer and while I enjoyed my first pint of Single Hop Saaz from Marstons, my attention was drawn to a beer I had somehow overlooked. My colleague declared it "excellent" and indeed it was. Dark Star is a brewery I certainly include in my circle of trust.  Darkness, is a black as the Devil's waistcoat and served in the peak of condition, at the correct temperature, with a tight creamy head as God intended, it had a wonderful, coal dust, roast barley and dark berry fruit flavour, all overlaid with pronounced resinous hops. (Warrior I understand.) At 3.5% it was a beer you could drink with relish and abandon while still being sober enough to control 30 or so unruly CAMRA members, all vying to have their beer favourites selected.

Now with one or two exceptions - the most notable being Windermere Pale from Hawkshead - pale beers struggle to avoid wateriness, when 'down' at this gravity, but in my experience, dark beers, when you put enough of the correct ingredients in them, suffer much less. Dark beers are notorious for hiding brewing faults, especially when laden with alcohol, but I'd submit that at this strength, the skill of the brewer comes to the fore and if there is a better example, I'd like to see it.  Well done Dark Star.

So Brewers? Want to make a really good beer at a low gravity? I'd humbly suggest that you get the dark malts out.

Yes I know Dark Star don't recommend sparklers, but in this case at least, they are wrong.
Posted by Tandleman at 11:55

So the point of drinking piss weak beer is controlling pissed up unruly beards, and when it comes to piss weak beer, darker has a bit more taste? Fair do's, but you could just drink regular grog and control them with a cattle prod.

Cattle prods are frowned on these days.

Besides, I drink for taste. Its the hipster keg lot that go for strength. Easy to mix us up. Easy aide memoire: we are fat and have some beards. They are thin and all have beards or stubble.

Eye, its all cliques. Got thrown out of the lager louts for getting a bit older and putting a few pounds on. Had to join the beards. If I can lose a few pounds and buy some trendy clobber I still dream of joining the crafterati.

I might try that if I see it, although I usually find that beers of around 3.5% taste thin.

Is there a particular reason no-one is mentioning the M word?

This beer was on sale at the TJ's Festival I reported on in my last post (Two Kentish Festivals).
I didn't try it because I considered it a bit on the weak side. Looks like I was wrong!!

I've always considered anything below 3.8% to be a bit of a poofter's drink.
But it certainly doesn't surprise me that someone from 'oop north is going misty-eyed about it.

Oh I didn't drink it. I just dabbed it behind my ears!