Get Some Decent Glasses


After a very enjoyable and relatively dry lunch in Mayfair last week (large gin £13 but very good) I was a little thirsty. Some kind Twitter folks had pointed me in the direction of some possible thirst slaking destinations near where I was lunching.  The pubs are pretty posh in that neck of the woods with prices to match. The usual London rules apply though. Unless you know the place, avoid cask beer in an unknown pub. That was firmly fixed in my mind. I was after some lager.  Probably just as well as I eyed, somewhat uneasily, Greene King IPA and something called London Glory - brewed in that far flung suburb of the great Metrolopiss - Bury St Edmunds.  "Well serves you right for going into a Greene King pub" I hear you say, but it wasn't. It was the King's Arms in Shepherd Market,  owned by Taylor Walker. 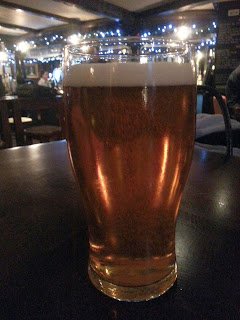 I had a pint and a half of Portobello London Pilsner (4.6%) with £1.10 change from a tenner. Six quid a pint,but it was fine in its own way. No obvious brewing faults, clean enough, no off tastes and I necked it down. But I wasn't happy at all about the glass (pictured). This tulip glass was without nucleation - in other words a glass designed for ale and most commonly known up here at least - as a Yorkshire glass.  Let's be clear here. It isn't an appropriate glass to drink pilsner lager from. It takes the edge off drinking what was a decent enough pint.  Surely if you can charge people six notes a pop, you can buy some appropriate glasses to serve the overpriced stuff in? It is just not good enough in my view.  Mind you, to my shame, I did have a second. Well, I was thirsty as I said and we had a lovely spot at the window with lovely views of the foreign barmaids taking turns smoking.

Going back to Taylor Walker, there seems to be rather a lot of them (around 100 in London) and it seems that this chain has somewhat of an alliance with GK as I noted through various pub windows as we made our way back through the Christmas lights and the purring Rolls Royces awaiting their well heeled clients outside Aspreys, Oswald Boateng and many others.  Want to see wealth. Take a walk along Bond Street.  Still it was all very pleasant and the lights were very nice.

I've rabbited on about glasses before, but I make no apology for it. Good glassware is important and failure to provide it lets the customer down.

We moved on to drink Sam Smith's Pure Brewed in various Sam's pubs. Two quid or more less the round and better and stronger beer too.

The beer was nowhere as brown as this awful ophoto suggests. It was proper pilsner coloured.

Lees Original Lager is served in its own glass. Good lads.  Read more rantings and some praise about glassware here
Posted by Tandleman at 09:44

Of course Bon and thanks. I should have looked that up. I forgot they bought Spirit. Cheers for that.

Taylor Walker are Spirit Group pubs, and Spirit were purchased by Greene King earlier this year. There are loads of them in London, often in prominent locations, and they often used to have some interesting ales on so it's sad to see that they are beginning to revert to Bury St Edmunds' famous pisswater.

I couldn't agree more Tandy. Putting lager into a tulip glass is wrong on a number of levels. It doesn't look right, as you point out for a pilsner it should be nucleated, and moreover as you very rightly point out at ^ quid a throw you'd expect quality to be in everything they do.

I will speak to the brewery and ask em to send our man Edwin round to ask politely if they'll use the proper glassware - if they don't have any Portobello will provide some. Thanks for the heads up TAND

PS I agree of course, boils ma pish when my lager's served badly

Those bloody goblet glasses that have started appearing for halves are an abomination - they knock the stuffing out of a beer on the pour.

Mind you, you have to put up with a standard glass, although IIRC they do use nucleated glasses for lager.

How ignorant am I, having not known what nucleated glassware was before this?

Is it just a British thing, or do we have this with German lager? Czech?

Does it not make beer go flat quickly?

The last but one time I drank in London was in a pub that advertised special guest real ales. The special guest turned out to be Thwaites Wainwright, which the pub obviously thought was exotic as they charged 50% more than we pay for it round here.

Nick: a nucleated glass encourages bubbles to form more quickly than in an ordinary beer glass, thus maintaining appearance of the head, so your beer doesn't look as flat as it probably would otherwise. In reality it is losing condition more quickly, so the answer to your final question is 'yes', which I would have thought was not a good thing, but there you go: the trendies think nucleated glasses are the way forward.

Properly made lager forms a decent head without the use of nucleated glassware.

It goes without saying that lager should be served in a proper glass, oversized with room for plenty of foam. Especially if you're asking six quid a pint for it. Sadly, I generally don’t bother, as most bar staff in this country (unless trained by Stonch) can’t pour lager to save their lives. The high level of gas (5g/L) is in the beer in order for it to be knocked out of solution when pouring so that you get a nice “crown” of froth. Not to be generating a constant stream of bubbles from the bottom of the glass like some sort of lava lamp.

Interesting. I don't ever remember hearing of nucleated glassware in the US.

13 quid for the gin? was it actually the meal?

That's posh Mayfair restaurants for you.

I’m not convinced about this nucleation business. I have two glasses which I use regularly at home. Both came from the Czech Republic, and both were obtained at the breweries whose name they carry (Bernard & Pilsner Urquell). Neither glass has any form of nucleation.

I agree with Barm’s comment about the way the beer is poured, and the “lava lamp” effect created by nucleation, which reminds me of old-fashioned, “big Six” keg beer! At this year’s European Beer Bloggers Conference in Brussels, we were shown the different type of “pour” used by Czech bar-staff to create either a beer with a thick creamy head, or a beer which has a “milky” appearance when first poured. I had a go at doing this myself, and it is not as easy as it looks. Our tutor was none other than Pilsner Urquell’s master brewer, Vaclav Berka.

On the subject of appropriate glassware, I am pleased to report that more and more local pubs are serving beer in the correct branded glasses. Many micros’s, including Larkin’s and Tonbridge are now providing pubs with badged glasses to be used with their beers. Lagers too, are being offered in the correct glass, especially those brands perceived as being slightly upmarket (Peroni, Pilsner Urquell etc).

dont knock Bury,thats the real Bury not that Manchester suburb ;) for beer unless youve been there, though Ill give you London Glory as a waste of drinking space, one of those beers that never failingly disappoints, brewed specially for the London market, which says more about what GK think Londoners like to drink though to be fair they probably arent far off in the majority as I can often find myself in the latest London craft pub drinking 1 of any number of exciting distinct beers, whilst everyone around me seems to be just drinking the Peroni.

as for the glasses thing, tricky subject, as others have noted I also have Czech pilsner glasses from Staropramen and Pilsner Urquell and they dont seem to necessarily assist nucleation, I dont disagree if you are paying £6 a pint (at which point I think Id have left anyway) you dont expect to get it in the bargain bucket ale glass which does the beer no favours at all,and if the bubbles are sticking to the sides means hasnt been cleaned properly anyway

The Guy Next Door said...

Brewers spend a lot of money and effort to come up with the right glass for their beers. I hate it when pubs serve beer in the generic glass rather than the ones they are meant to be served in, and for which the brewers have given them glasses for as well. This is specially try for half-pints.

Talking of half-pints, could you provide your view on these in another post? Half-pints or "small beer"as they are known in Europe, is definitely seen as the accepted thing in most of the bars in Europe, but I sometimes get a strange look from the British pubs, which worries me. Why shouldn't I enjoy 3 half pints taking my time to enjoy them?

Real men drink whatever they like without feeling forced into obsolete and ridiculous notions of appropriate masculinite behaviour, O anonymous one. Mine's a Babycham if you're going to the bar.