It's the Offer Stupid 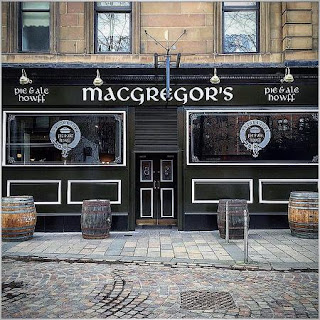 It is a decent 20 minutes walk from the excellent Laurieston Bar (see below) to Macgregors Pie and Ale Howff, the next recommendation from@robsterowski for my recent trip to Glasgow.  The walk is very relaxing, taking you as it does back over the river, through a little of the main shopping area and then into one of the oldest parts of Glasgow, the Trongate - which is well worth a look from anyone - and hence into High St and after a wrong turn, into Blackfriars St.  The pub itself impresses from the outside, but inside it is a bit poky and gloomy.  Still I have nothing against poky and gloomy, as that could easily describe my beloved local and I like that rather a lot.

Inside three people were at the end of the bar chatting noisily to the barman, who took his time to disengage and come over. I ordered a pint of Inveralmond Ossian from the four, or was it five handpumps and noted with approval that the barman was one handedly splashing beer from the pump into a glass balanced on the drip tray. "Good" I thought "he's clearing the line of old beer as nobody is drinking it."  Mistake. He wasn't. This unappealing liquid was my (short measure) pint. Before I could summon up the words to say anything I was relieved of around four quid and the barman returned to his pals. The beer was insipid and I left a fair bit of it and slunk out, glancing back as I did so. Nobody noticed. I hadn't really existed for them in the first place, a fact I was all too aware of.

Reading various reviews of this place, I realise two things. Most of the praise is for the pies, which get a very good press and which, along with a choice of cask beer, is the main focus here and indeed inspires the pub's name.  Now I realise fully that I may just have been unlucky and it was that quiet spot in the mid afternoon, but I shouldn't have felt so unwelcome.  The barman wouldn't of course have known that he'd play host to a blogger on a day out, but then shouldn't he show just a little more interest in the only customer who was there other than his pals?  Maybe talk me through the beer or something? I reckon so.

So, nothing much to see here at all. Most of all the "offer" was absent. I won't be back. Why would I?  They didn't even ask me if I fancied a pie?

I won't say for a second "Don't go there".  Hopefully it was just a one-off but it wasn't a remotely pleasant experience.  Fortunately my next two recommendations from Rob were excellent.  Three out of four isn't that bad.

The pies do look very good on various websites. I rather fancy a breakfast pie, or the haggis neeps and tatties one.
Posted by Tandleman at 15:02

Labels: Bad service, Not a Happy Bunny, Pies
Email ThisBlogThis!Share to TwitterShare to FacebookShare to Pinterest

On your main point, you're point on. I like acknowledgement, I like a little bit of human interaction, not much to ask.

Sounds like I dodged a bullet there yesterday! It was probably on it's way out already. They say they may be moving to a new premises so we'll see if it gets in GBG in future years. Agree re just a bit of acknowledgement, hate it when they just chat to their pals!!

The lesson here is, swerve actual pubs, go down spoons & use the phone app for a chicken, bacon and avocado salad & a pint of lager.

Plonking the glass on the drip tray and just tugging on the handpump is always a *very* bad sign - and almost a guarantee of beer with little or no condition :-(

Nothing at all to do with you being unlucky. Even from just your account, it's clear he had no idea how to serve real ale, and it doesn't sound as though he cared much either.

I'm slightly surprised that you went for the 'leave the beer and walk out' option. If you bought a loaf for £1.50 and found it was stale, you'd take it back without a thought. That bad pint cost nearly three times as much.

Sometimes it's just not worth the bother, especially if it's somewhere you're never likely to visit again. As Tandleman has said himself in the past "you're going out for a drink, not a confrontation".

"You're going out for a drink, not a confrontation".

Similarly, when we go to the supermarket, we're going out for our shopping, not a confrontation, but most people would take back food which was past its best. We British drinkers - and I have occasionally been guilty of this myself, so I'm not being 'holier than thou' - must shed our reluctance to challenge poor beer quality, especially when at least one pint in every three is substandard.

But going to the pub is a social activity; going shopping isn't.

There's also a difference between places you use regularly, and places you're never likely to go back to again.