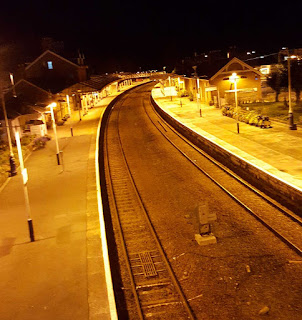 I have a lot of sympathy for my CAMRA colleagues in the South West of Scotland. Real ale is rather thin on the ground around these parts and it must be difficult, in a sea of Tennents, to keep the cask beer flag flying.

I was in Dumfries and Galloway a couple of weeks ago and though my friends and I didn't try all the pubs that sold real ale, we had a go at quite a few of them.  Some, it has to be said, even though they were listed in the Good Beer Guide were less than enthralling quality wise.  The most common fault being tired beer and warm beer, probably  indicating turnover wasn't all it could be. There was exceptions though and hats off to the  Cavens Arms in Dumfries for spot on beer - though dining pushes drinkers rather to the side here - and the Selkirk Arms in Kirkcudbright whose beer was immaculate and, as we were the first customers of the day, was carefully pulled through to ensure quality. The resulting pints of Kelburn Pivo Estivo were well up to snuff and the beer garden, in unscheduled sunshine, was quite a bonus too.  So it can be done.

One thing we did notice was the dominance of beers from Greene King, supplied no doubt through their Scottish subsidiary, Belhaven. Fair enough, but not once in the half dozen or so pubs that sold Greene King, was a single cask ale from Belhaven available. Shame that.  It was sad too to see that beers in the local Wetherspoon in Dumfries were dominated overwhelmingly by Greene King and Marstons, though in fairness here, quality of what we had was good.

Now of course where there is a brewery tap, one can breathe a sigh of relief and relax in the knowledge that here at least will be a friendly welcome and beer as the brewer intended. Well you'd like to fondly imagine so wouldn't you? Sadly in the visit to the local brewery and tap, in my second Scottish home town of my youth, Castle Douglas - my grandparents lived there - that wasn't to be.  The beers were lifeless and warm and frankly near enough undrinkable. A quick look under the bar showed that the casks were not temperature controlled in any way and when this was mentioned to the barman, we were advised that real ale was meant to be served at room temperature.

We made our excuses and left.

Yes, I will be dropping a note to my CAMRA colleagues in South West Scotland about the brewery tap. Brewery taps should be a beacon of real ale excellence. After all if you can't get cask beer there in the best form possible, then where can you? The only other bar in Castle Douglas purporting to have real ale, didn't have. We beat a hasty reteat to Dumfries for liquid sustenance.

The photo isn't beery, but shows Dumfries railway station at night. I spent many a time there with my Mum and sister waiting for the train to CD. Alas the line was axed by Beeching.
Posted by Tandleman at 12:11

In some parts of Scotland you get the impression that the mere fact of stocking cask beer qualifies a pub for the GBG :-(

Here in Midlothian we are also swimming in a sea of Tennents. The joke is that the red "T" means Try somewhere else as there's no cask ale!

Also worryingly, is the prolific use of Autovac in and around Edinburgh. I hadn't heard of these devices until I moved here and had frequented the pubs for some time. Personally, I think they should be up front with the customer when they are in use. I've set up a petition to this end: https://goo.gl/dXuNdi

Strangely enough, in a GK pub in that there London on Saturday, none of their cask in sight, yet 2 Belhaven on offer.

We spoke briefly at GBBF after i introduced myself while you were working on BSF.

You did mention this trip was planned and it's nice to see you blogging about it - although sadly the results aren't great.

I can only back up your views on Sulwath... I wasn't impressed the only time I have popped in either. Shame...

Oddly (or not) the best beer I've had in Scotland came via autovac in a famed pub in Musselburgh. Doesn't bother me.

Isn't there a point where you just give up, accept it for what it is, and swerve cask in anywhere but Tand Towers?

GK own so many pubs thesedays its hard to keep track of what they all are allowed to do across the various chains and oub partnerships they have going. They offloaded a fair few Belhaven pubs too to some pub/leisure co, who were also buying up surplus Wetherspoons as well, but then somehow agreed to GK supplying their beer for a time.

So undoubtedly GK or in fact Belhaven themselves as they seem to operate far more autonomously than you might think, might be keeping the Belhaven beer to specific pubs, because its that which distinguishes them arguably still,and letting the rest just have the limited Hungry Horse variety which is basically IPA + OSH.

It’s noticeable round here that Belhaven pubs show a marked reluctance to sell Belhaven’s cask beer. I’m not sure why that is.