The Loveliest of All


I rarely write in any detail about Manchester pubs, but I've been meaning to say a few words about the Unicorn in Church St for quite some time.

This former Bass house is one of the few remaining traditional multi-roomed pubs of what could be said to be the old school. Along with the Hare and Hounds in Shudehill and the Millstone in Thomas St and maybe one or two others in the same broad area, the Unicorn is the haunt of those of a certain age who have been around the block a bit. It is rough and ready and for many it will be daunting, as it is a no holds barred, old fashioned but attractive, city centre boozer of a type that was all too common in the days when I lived in Liverpool, but nowadays is a bit of an endangered species. It is invariably rammed.

My last visit was unplanned and perhaps not the best date to choose. While E and I awaited a table at a Northern Quarter restaurant, we had 45 minutes to kill, so nipped in for a pint, completely overlooking that this most traditional of pubs was celebrating St Patrick's evening and was a lot more chokka than it usually is - and it is never not full. Fighting our way through the throng of smokers at the door, we were nearly bowled over by the Fields of Athenry at top amplified volume. An almost impenetrable wall of celebrants made progress onwards and inwards a bit of a challenge. To the uninitiated this would seem like a near impossible task, but a wriggle here and an "excuse me" there and we were in and within sight of the bar. To me there is only one drink to order here and it isn't Guinness, though there was plenty of that in evidence. No. Draught Bass it must be, for the Unicorn, in a nod to its previous ownership, stocks Bass as its regular beer.

The bar is broadly horseshoe in shape, with one closed off end, a small room beyond that and to the right off the main corridor, a larger rectangular area split into several distinct parts, with a neat snug like area in the front.  It is all wood, leather and brass, with the passageways rather too narrow to comfortably squeeze past the stand up drinkers who invariably huddle there as they most likely have done for many years.  Additionally on this busiest of nights, every space was taken. Clutching our drinks we made for the corridor from the crammed bar. I watched as E deftly moved out and with alarm noted as she did, that a fellow imbiber turned to watch her go, in the process swiping a drink off a ledge and onto the floor.  I was unprepared though to be accused the crime and warily protested my innocence. These things can easily get out of hand, but a worrying situation was defused and all became sweetness and light as it became clear the drink was unattended and unclaimed. Its demise and therefore who dun it, didn't matter. Whew. 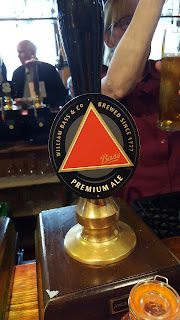 From our new perch at the bottom of the stairs leading to the accommodation above and opposite the juke box we watched three rather inebriated young women swig wine like beer and shriekingly discuss moving on to the Millstone, while still singing off key along to the music. A warning by a staff member to "keep it down" was to no avail and frankly, above the merry din, a touch pointless. They stayed for another and like as not, another after that.  Around us there was young and old. The young - mostly pretty pissed - seemed just as at home as their older counterparts who rigidly claimed their usual spot while being inadvertently jostled. Staff filled glasses at lightning speed and the tide of people ebbed and flowed.  It was all very jolly and just a tad edgy.

A point to note is that actually, though the noise and numbers were enhanced by the occasion, it is pretty much like this all the time, with an amazing array of divergent characters; ne'er do wells, respectable types, older couples and everything in between can be found within. In short it is a proper pub of a type that was common once, but isn't now, so well worth a visit for that alone. And you get to try Draught Bass.

Do keep your wits about you though.

Another plus is that the staff are very quick and friendly.  You never have to wait long for a drink in here. Also handy for the bus station, local bus stops and the rest of the Northern Quarter.

Why no photo of the pub? I hadn't actually intended to write about it and these days, you can't just nab a photo off the web. Draught Bass it is then and not even from the same evening. I'm rubbish at this.

Been in loads of times, usually for Manchester Jazz Society which meets on Thursday night in the function room upstairs, and never seen any trouble. Decent pint of Bass too, a beer you rarely see on the bar in Manchester pubs.

Not rough, but just not your gentrified type of pub. Not seen trouble therer either, but it is a pub where you need to be tolerant and be prepared to join in a bit.

I use this public house myself every week, mainly Sundays and I absolutely love it. DJ Kev after 6pm, plays a bit of northern soul, Motown etc, great night.... Love it, Kirsten, the landlady is fab and all her staff, who do a great job. Xx

I haven't been to any of the music nights, so that's why I didn't mention it. Glad it is good.

Great pub. For an unknown reason though I have been in many times I seem to miss it on my way through to others, but a timely reminder & I will make more effort this cricket season after OT. Like & also frequent the others mentioned in the blog also

The Unicorn & The Millstone are about the only decent boozers left in the NQ - Oh and The City at the top of Oldham St, but I've not been in there for ages so it may have been gentrified. None of these pubs are "rough" btw - In city centres the only rough places are the "weekend "vetical drinking sheds" - Boozers like the Unicorn & Millstone are just the types of places where if you're not a dickhead, you'll be fine. Remember The King though, on Oldham Street? lol it could get a bit "lively" in there. Still, it was better than what they've replaced it with.