Cain's to Return to Liverpool? 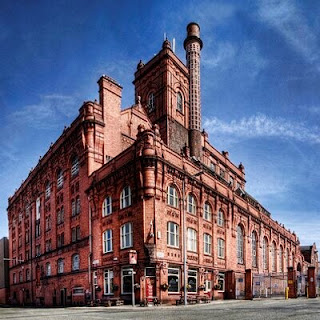 Readers of this blog will recall that Robert Cain, based in the old Higson's Brewery (itself the original Cain's Brewery) in Stanhope St, Liverpool, closed under somewaht of a shitstorm in May 2013. See the Liverpool Echo here for full details.

Suffice to say that the Dusanj brothers who bought the brewery had a somewhat chequered career in brewing and pub running, but finished with an idea of turning the Stanhope St site and its historic Grade 2 listed brewery into a "Brewery Village" with a hotel, beer hall and whatnot.  This never happened, though there is some beery activity on the site on a small scale now.


Now it seems it will. Local entrepreneur - well Rainford, but that's close enough - Andrew Mikhail, has taken the plan forward and in a £7 million plan, agreed a deal with owner (I think)  Sid Dusanj to take over the Cains brand and bring forward his 15,000 sq ft scheme on three levels of the original Cains Brewery building. Plans include a craft-brewery with cask and keg beers, an Altrincham-market style venture for artisan food & drink lovers, and a state of the art sky bar.

In addition, another bar with capacity for 120, already named as The Quarter Hoop, plus a brewery hall housing 400 guests will sit alongside the existing Brewery Tap and the Punch Tarmey brand (part of Mr. Mikhail’s existing portfolio) that will operate on the other side of the brewery.

The development will take place in four phases over three years include in  phase one, Punch Tarmey, an artisan food and drink hall. The brewery will follow in phase two, the sky bar in phase three and the hotel in phase four. Mikhail said the new Cains Brewery project will create 200 jobs and will partly model itself on Guinness Brewery in Ireland. He added: “For example, we’re going to create one of the biggest Irish bars in the industry that will be sports-led, include brewery tours, lots of customer interaction with a child-friendly, family-friendly vibe.”

The building is wonderful and I for one certainly hope this all comes to fruition. There are already many reasons for the beer lover to go to Liverpool and hopefully, fingers crossed, this will be one more.

The revival of the Cain's brand is interesting, with Higson's (without the famous bitter, already revived), history is being recreated in Scousley.

Wonder if the Dusanj brothers are getting a cut? Who will own the site? Dunno, but watch this space.

I've wondered at times if a hook up with Liverpool FC would be beneficial for Cain's, do a red ale that is only available at Anfield kind of thing, I suppose they could a bitter for Everton too! :D

I think the Dusanj Bros are renting out the building but selling the brand. There is already lots going on at the Cains Brewery, with several bars, cafes and market. I think this will be a model that ensures the future of the brand and hopefully the beer will be of better quality than when it closed.
Competing with the likes of Marstons for supermarket own-brand deals is well and truly over. Cains is in the Baltic Triangle which has become Liverpool's thriving equivalent to London's Shoreditch. The area is now a great night out which was not the case when the brewery closed.
http://www.breweryvillage.com/
A shame that Boddingtons Brewery and others were knocked down as this is a great idea for mid-scale city breweries.

Had a pint of Cains when I worked in Liverpool in the mid 90s for a couple of years. One pint. Then I drank Stella for 2 years.

Liverpool are sponsored by Carlsberg.

Carlsberg were till 201. Current sponsors are Standard Chartered Bank.

Will they bring Cain's Dark Mild back I wonder?