A Little Bit of History

I tend - no - firmly avoid - writing in any detail about beer history. Firstly I'm a lazy bugger - I tend to paint things with a broad brush and leave the finer points to others - and secondly - I know for sure that I'd get a lot of it wrong and haven't the will or application to research to ensure I don't. I know myself fairly well.

When I was working and the boss of quite a few, I liked to think I saw the big picture and then had others apply the fine detail. The attractions of this method of operation became clear to me in one of the few actual epiphanies I have ever had. When I went to see,  a long time ago, the Three Graces statue in Edinburgh, the accompanying pull up description told me that Antonio Canova, the sculptor did not, as I'd originally supposed simply take a suitably sized lump of stone to meet what he had in mind and fashion it into a magnificent statue, by chipping away at it over a long and tedious period. Rather he drew it roughly, had someone better at drawing firm it up into something precise, added dimensions and then set all his apprentices and other trainees do the hard work. Eventually, having supervised the operation, he trotted along at the end with his daintiest chisel and some sandpaper and finished it off. Well - more or less.  Not that bad a way to operate I thought. It helped my career a lot. 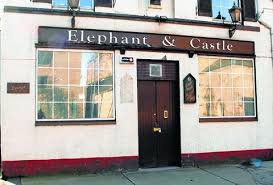 So back to beer history - of a sort.  When I lived in Dumbarton we had a small, but very old pub at 1 High St, called the Elephant and Castle. Named after the town's coat of arms, it was when I lived there, operated and probably owned by Scottish and Newcastle Breweries. I used to go there on occasion and invariably drank pint screwtop bottles of McEwans's Pale Ale, a beer for which I have an abiding affection. And why not? It was the first beer I ever tasted. The pub wasn't that big and certainly, as far as I recall, had no particular architectural features to accompany its venerable years.  Anything of any antiquity that had been there had long since gone, but it was always one of the friendliest pubs in the town and so worth, as they said then in these parts, "throwing your heid roon the door" now and then.

Sadly, while I did pop in again sometimes over the years when I visited my old mother when I had long since lived in England, it somehow had managed to close in my absence and became a rather sorry sight, with copious weeds growing out of its roof and gutters. It was finally demolished in 2017, having been closed for over ten years, to make way for a new walkway to the River Leven from that side of town. 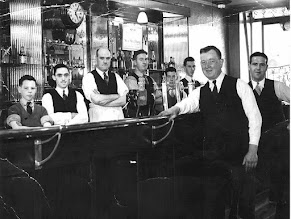 It was however brought back to my mind by this photograph which shows the pub in 1946, the staff resplendent in their starched long aprons and suitably serious expressions. The photo was posted on the Facebook site Memories of Dumbarton and there is an accompanying article written in 1986 describing it in a little detail.  Of course, those contributing tended to comment on how they knew or were related to the subjects in the photo, rather than the pub. Sadly there was little insight into the pub itself, but it was referred to, somewhat obviously, as Nellies, something I never did, or in fact, had ever heard. To me, it was always just the Elephant and I don't ever recall it being called otherwise. But I don't doubt it.  The local newspaper covered its demolition, but shed no real light on its history, except to say that the council accepted that despite the pub's being built around 1807,  it had no architectural merit or features.  One interesting point was that in common with the Irish way of pub naming, when the front was torn off, it revealed it had been called Galbraith's at one time. Again something I didn't know. 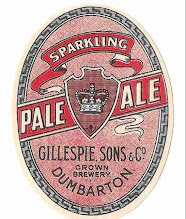 Dumbarton also used to have its own brewery. The Crown Brewery aka Gillespies, which was further along the High St than the Elephant, or rather, just off it. Oddly enough, that's something I didn't know for much of my Dumbarton life, but how that changed is another story and is mentioned here.  There isn't much detail on the Crown Brewery that I can find, but various labels and scant information are to be had fairly easily. In short though, the brewery was wound up, according to the Edinburgh Gazette in 1952. Sadly I have not been able to find out what subsequently happened, but it does seem that Scottish Brewers bought some liquidated assets, as they used "Gillespies" as the name of a stout, a beer which some may even remember.  I've often wondered if Crown/Gillespies ever owned any pubs in the town or indeed, elsewhere, but I have never been able to find out.  Of course if I was a proper historian - hold the press - any sort of historian at all - I'd delve more into that, but I refer you to my earlier paragraph above.

So the tale ends there? Not quite. When I looked at the photo above, I noticed behind the bar, on the gantry, a mirror. It is hard to say, but it looks like a Crown Brewery mirror. The shape of the crown on the mirror matches the crown used as the company logo. Was the Elephant and Castle supplied by Crown Brewery? It would seem so. Was it owned by them? Maybe. We need a historian to work that one out.

The Coat of Arms for Dumbarton is the Elephant and Castle. The elephant allegedly for the shape of Dumbarton Rock and the castle; well, the castle that sits upon the Rock. The Rock, 240 feet high, is allegedly the oldest known fortified site in Scotland and perhaps, Britain.

I am grateful to Margaret Rose Black of Memories of Dumbarton for permission to use the photo of the staff in the pub and for the article I refer to.

It is a Crown Brewery mirror. Just behind the clock it says Gillespies.

I thought so. Thanks for confirming. You must have eyes like a shithouse rat. (-:

Ah. I see it now. Thanks again.

Are there any visit-worthy pubs (keg, obviously) in Dumbarton itself apart from the Wetherspoons, Peter ? What Pub only notes the Counting House, which I guess sold Belhaven cask at one time. I still have the Captain James Lang to do some time.

In a word - No. The pubs frankly, aren't what they could be, or were. Certainly never seen cask in the Counting House. Helensburgh is the best bet.

The other, larger mirror looks like it says McEwan's.

Yes unfortunately pubs in Dumbarton are a washout. You can call into Lennox Brewery on a Saturday though, and once this pandemic business is over nip up to Renton for the Central Bar and hopefully Loch Lomond will be having a tap room in their newly relocated brewery.

Interesting that people can imagine a time when there will be no senseless restrictions on freedom, imposed under the dubious auspices of a fake pandemic.