Glasgow Belongs to Me. And E. And a Downpour.

On Monday, we had planned to visit Glasgow for a few beers, some footwear shopping (E of course) and a meal at a recommended restaurant. Fate, family and fecklessness moved it to our last full day of our break, which, as it turned out, was either just as well, or a bad thing. I can't make up my mind. 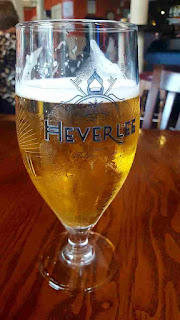 As these things do, it all started off rather well. A pleasant breakfast and a walk round Helensburgh in warm sunshine was rather nice. Once again, I scanned the Gare Loch unsuccessfully for naval activity from or to HMNB Clyde. Nothing. Our submarines were nowhere to be seen, though of course, they may have slipped in when I wasn't looking. Or out for that matter. In fact, the only clue that this is a Navy town (of sorts) was three rather noisy Navy lads, the previous night at chucking out time, waiting at the taxi rank and singing loudly, while awaiting their ride back to the base.  Under our rented flat window as it happens, but whatever, I digress.

We set off about noon. The train to Glasgow takes about 50 odd minutes, passing through both my home town of Dumbarton and the site of the house I lived in for the first 13 years of my life. The house, above Dalreoch Station, has long gone, being replaced by a utilitarian prefab kind of thing, for the sale of rail tickets. And so to Glasgow.

It was warm. Muggy warm, and we'd passed by some rather rainy bits on the way there. We kidded ourselves that the rain had likely been and gone in the centre of the city. It hadn't as we were to find out. Still, mission number one was easily completed. Eileen's sports shoes were purchased with the minimum of fuss, and we went for a wander, checking out the rather attractive centre. I wanted to look at phones in 3 as my contract was up. Very helpful staff showed me what was what, but I demurred, as my choice was only available in pink or purple, and they clash with my complexion. Or rather, matched it a bit too closely. Maybe Rochdale will have one more suited?

It was looking gloomy when we left, looking for liquid sustenance.  A pint in Blane Valley - it was handy -  was our first under reduced Covid regs. It looked normal. An old guy sat at the bar with a large goldie and a half pint chaser; we bought at the bar - a pint and a half of Heverlee - is it brewed by Tennents or, as implied, in Belgium? Don't know. The staff were fab, and we eyed the outside through the open door. It looked brighter, so we decided to go to an old haunt of mine, the Rhoderick Dhu, by Central Station. Bearing in mind it was a Monday, the pub was reasonably busy. It is deceptively large, a Belhaven house, with a large selection of lagers and a Greene King keg beer.  And Guinness, which ran out, much to the consternation of locals. Delivery issues, apparently. Locals were at the bar and few were complying with mask wearing? Confusion or mutiny? I don't know. 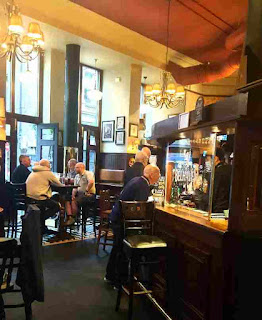 Then it rained. I don't just mean a spit. It bounced back to knee height as we watched passers-by run for cover. A group of builders rapidly revised their plans, getting another round in. We did too, until it eased a bit. We were halfway through our drinks, but before we could leave, the monsoon retuned with a vengeance. The whole pub was kind of marooned in a stand-off with the weather. Now this is fine when you are swooping cask, but tedious when it is St Mungo and Tennents. And we had a dinner reservation in Partick, which required a Subway trip. Nothing for it. It had eased off to a solid downpour as we legged it to Buchanan Street and our underground train to Kelvinhall and round the corner, slightly damp, to a lovely meal, again with great service at nearby No16 Byres Road. Have a look at the reviews. I recommend it highly.

I'd like to say our journey back to Helensburgh was uneventful, but cancelled trains and a two and a quarter-hour journey back, due to flooded lines, was a pain. We arrived in time for a pint in the Royal Bar, just under our flat. Alas, that cunning plan was vetoed by one half of the party and the other half knew better than to argue.

The Manager in the Rhoderick Dhu was a star. He was obviously training a couple of new staff, but ran the place with consummate ease. A master class in fact.

Oddly, and we've all been there I'm sure, I was glad the next morning that proposed nightcap didn't take place.

Rain in Glasgow ? You're pulling my leg.

I really like your blog... very nice. I have learned so much from your articles, and they have improved my articles significantly. Best Character Creator Tools this article providing great information.

Heverlee is brewed in Belgium, but C&C own the brand.

At least, that was the case last I heard.


I am so delighted I found your weblog, I really found you by accident,
while I was researching on Bing for something else, Regardless I am here now and would just I saw this FAKE UK DRIVING LICENCE THAT WORKS FROM THE DVLA an will like to say thank you. (I also love the theme/design), I don’t have time to go through it all at the minute but I have bookmarked it and also added your RSS feeds, so when I have time I will be back to read a lot more, Please do keep up the excellent job.

I am so happy, i never believe i will be this happy again in life, I was working as an air-hoster ( cabby crew ) for 3years but early this year, i loose my job because of this deadly disease called Herpes virus (HSV), I never felt sick or have any symptom, till all workers were ask to bring their doctor report, that was how i got tested and i found out that am HSV positive that make me loose my job, because it was consider as an STD and is incurable disease, i was so depress was thinking of committing suicide, till i explain to a friend of mine, who always said to me a problem share is a problem solved, that was how she directed me to DR.USELU, that was how i contacted him and get the medication from this doctor and i got cured for real, I just went back to my work and they also carry out the test to be real sure and i was negative. Please contact this doctor if you are herpes positive or any STD diseases his email is: dr.uselucaregvier@gmail.com or you can call or whatsApp his mobile number on +2347052898482