A Tale of Two Holt's Pubs 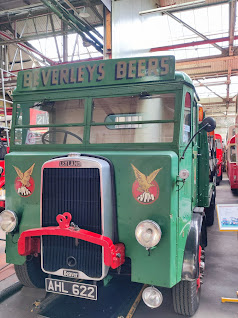 On Saturday just gone, E suggested we go to the Manchester Transport Museum. Actually almost entirely a bus museum, but hey ho. While it was by no means busy, I enjoyed the old buses and E liked seeing buses of her Manchester youth, dolled up as they were in their former council liveries. All, more or less, were from the local area and most, surprisingly, were in working order, with some of the latest looking like they could nip out and pick fares up there and then. Better than some of the old wrecks that First Bus continue to use, but I digress. Apart from a mock-up of the first Metrolink tram, the sole other non bus was a dray from Beverley's Brewery in Wakefield, so this being a beer blog, here's a photo of it.

We left, seeking a pint on this hot day. E suggested the Holt's Brewery Tap, the Derby Brewery Arms, about half a mile away, and so there we went. Outside enjoying the traffic views on Cheetham Hill Road were a few lads drinking lager and inside a couple doing the same. I swerved the cask on the basis that nobody was drinking it, for a couple of pints of nitro stout, which was refreshing in the sunshine.  We reflected that the pub was absolutely deserted and while we enjoyed watching the astonishingly varied Cheetham Hillites, but seeking something a little more lively, we caught a bus back to Shudehill and, after a swift one in the newly refurbished Sadler's Cat - see below - we decided on a last one in the recently Holtised, Lower Turk's Head. Now this, at around five pm on a Saturday, was absolutely rammed. Both fairly large rooms were bulging at the seams and bar staff flew up and down serving as quick as they could. It was standing room at the bar only. What a contrast. 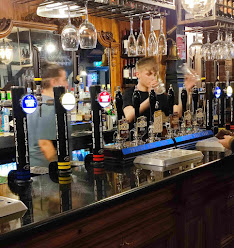 We stood at the corner of the bar, me feeling like I was back in the good old days, and E, probably a bit less keen, keeping her eye open for leavers, so she could nab a seat.  I had a pint of Holt's Mild, which was superb. Eventually we got a seat opposite the bar where we could easily watch the mayhem.  It took me a few minutes to adjust. This was like old days, with an astonishingly varied clientele. Older couples mixed easily with younger folks seeking a few cheaper drinks before venturing into town for the evening. Some though were clearly there for the long haul and were getting rather merry. This was a throwback to when pubs weren't quite so segmented and compartmentalised. Only the needless repetitive music, just loud enough to be annoying amid the revelry, struck, literally, a discordant note. I was, though, for a bit, slightly uncomfortable, thinking about Covid. E perhaps more so, but that passed, and we braved another pint before nipping over the road to get the bus home.

Joseph Holt has spent money on both pubs recently, but I rather fancy that it is better spent on the Turk's Head.

Sadler's Cat was rather empty inside. Formerly the Pilcrow and now operated by Cloudwater, it has a new ventilation system, but you'd be wisely advised to put a coat on here. There can't be a colder pub around. No wonder most were outside in the windy square and hats off to the hardy bar staff.

E resisted my bright idea of having one in the Hare and Hounds, another splendidly old-fashioned boozer selling Holts.

What do you note about the pub from the photo (left)?

Is it that they've got as many mild pumps as bitter - not to mention Two Hoots (I can never remember what that is) and a token Bootleg beer?

Or that there are as many keg taps for their own-brand lagers as mild and bitter put together?

Or that nobody behind the bar is wearing a mask?

Give us a clue!

You beat me to the Sadlers cat. I popped in just before 6 after the City natch. Decent cask but not a place to linger, possibly because of that ventilation.

Everywhere else, including the Hare and Hounds, was rammed. Good to see the city bouncing back.

I’ve been to the Derby Brewery Arms a couple of times when it wasn’t busy and the cask beer was excellent. As you would hope you could expect from a brewery tap.

The thing I noticed is someone at the bar ordering a pint.
Here in Ireland it's still table drinking only with perspex screens on the bar and vaccine passes required passes indoor drinking.
And this isn't likely to be changed until October 22nd, another month away even though Ireland has more people per capita fully vaccinated than the UK.
It's bloody frustrating as I really don't like drinking sitting down and not really much outside either unless I'm pulling on a cigar.
I was over in the UK a few weeks ago to bury two of my old mates in one week and nearly cried tears of joy when I saw barstools occupied in my old local.

At least it's not Lostralia.

My impression from cities over the last ten years is that the pubs are rammed at an earlier and earlier time on a Saturday afternoon. I was in a Leeds bar off Greek St recently that was like a nightclub at 2pm!

An Irish pandemic tale set to music.
Ireland is run by a BOGOF rotating Prime Minister(Taoiseach)with the coalition parties taking it in turns to be number 1.
The current number 2 or Tánaiste is Leo Varadkar.
Ireland's live music industry(pubs,concerts,festivals)has been cancelled since the start of the pandemic in May last year and has only just begun to open up with strict conditions although large events such as the Electric Picnic Festival (Ireland's Glastonbury)due this month remaining cancelled.
Varadkar said Britain's rules regarding festivals were "definitely not an example to follow".
A few days later he was pictured at the Mighty Hoopla Festival in London's Brockwell Park.
He was outraged at his privacy being violated, although probably more so because he was photographed picking his nose.
My local's Sunday lunchtime diddly-eye session is still forbidden.It may start up again after October 22nd.

Presumably Holt's wouldn't have spent a lot of money doing up the Derby Brewery Arms unless it did good business at some times of the week - although it's a bit hard to see where the trade is going to come from.

It really is hard to see where it might come from. Mind you, it doesn't look like a n overly expensive makeover.

What a good place for a beer festival. The bus museum I mean, although the other two are near museums of good British pubs.

Hi I did not know the subject, thanks for sharing it helped me a lot to understand a little better I will search more!
wordpress
ufa88kh.blogspot
youtube
UFA88 online casino in cambodia

I am here to testify how great man called Dr Godwin helped me out with herbs and roots which he prepared for me in use of curing FIBROMYALGIA. I takes his product (cure) for (14) days before I am to known I was totally cure out of it, and i promised him that i will testify my healing to the whole world about how he cured me which I am very happy I am doing now , Dr Godwin also cure all kinds of diseases , HEPATITIS, A,B,C , CANCER, DIABETICS , FRIBLOD,ALL KINDS OF SPELL CAST ,and so much more , please you can get him contacted on his email drgodwinsolutionhome@gmail.com OR WhatsApp +2348054615060 He can also cure following virus (1).Herpes (2).Cancer (3).Hepatitis (4).Hiv/aids (5).Pcos (6).Fibroid (7)diabetes (8)fibromyalgia etc. https://drgodwinsolutionho.wixsite.com/drgodwinsolutionhome


I appreciate several from the Information which has been composed, and especially the remarks posted I will visit once more
concrete service.
thank you!

I am so delighted I found your weblog, I really found you by accident,
while I was researching on Bing for something else, Regardless I am here now and would just I saw this FAKE UK DRIVING LICENCE THAT WORKS FROM THE DVLA an will like to say thank you. (I also love the theme/design), I don’t have time to go through it all at the minute but I have bookmarked it and also added your RSS feeds, so when I have time I will be back to read a lot more, Please do keep up the excellent job.