Recently there's been a fair bit of talk on Twitter and the blogosphere- does that still exist? - about how pubs are faring in January. Of course, most of this will be observational and anecdotal, and impressions given on, say a Friday night, may not give the full picture of how things would look at 4 p.m. on a Tuesday, but that is the nature of the beast.  Even if you know the landlord or landlady well, they are hardly going to share their financial position with you, though if you know them well enough, you can certainly gain a touch more than if you just throw your head round the door and glance round.

My own view kind of echoes that of Boak and Bailey, and my general impression is that customer numbers and spend, is generally holding up fairly well, but on the negative side, outgoings for supplies and fuel may well be not only cancelling this out, but will in a great deal more cases than we'd like to believe, actually throw them into a negative situation. My own discussions with a few pubs would indicate that the cost of heating is really the main concern. After all, nobody wants to visit a freezing cold pub and heating a pub in the quiet times is quite a burden nowadays, hence the huge variation in opening hours that we commonly see.

Of course, this will ease as the weather gets better, but the big question, especially for those whose leases are up for renewal, is "Is it really worth it any more?" Looking at pub closures, some of them sudden and unexpected, the answer is, for far too many, likely a "No". While relief in the form of warmer weather is there for all, the sad truth is that looking forward there is quite possibly more of the same, as the war in Ukraine rages on and the fallout from that continues to affect economies. That, together with a reduction of fuel support for small businesses from the Governments, does not make soldiering on such an attractive proposition. Cold weather, sooner or later, is inevitable.

Another elephant in the room is price increases, though with the price of a pint being roughly equivalent to the length of a piece of string, that may not in the end matter quite so much as you might think. This varies of course, and while you are unlikely to have a clear idea ahead of time in a random visit to a city centre pub as to what a pint might cost you, it is much more noticeable in tied houses of local brewers for example, where the price of a pint is clearly known.  In my own locals, people often  approach the bar clutching their exact money and are acutely aware of increases. That doesn't happen so much in a free house, where, frankly, you could be charged anything at all. The dynamic is completely different. 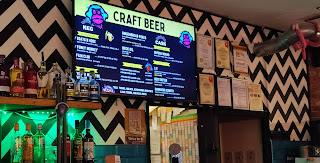 So, back to the anecdotal evidence.  In the pubs I visited, last week, all were fairly busy, though in fairness, most were my local pubs, all with a loyal batch of regulars  - and that's as I'd expect. When you have a local that you are known in and where you know everyone, at least to nod to, you are likely to visit as usual, though of course, you may have the odd pint less.  I was also out of area on Saturday, in Bolton attending a meeting. Afterwards we visited a couple of pubs. The first, the Northern Monkey, a modern pub selling craft beer, was very busy indeed, as was the Wetherspoons opposite, the Spinning Mule, which could best be described as "rammed". I'm guessing the prices would be pretty dissimilar, though I can't be sure, as it wasn't my round in either. My final visit was to the ever popular Hare and Hounds in Shudehill, where the pub was pretty well stuffed as usual. That of course is expected from this venue, and this is a good point to add my usual advice to pubs. Concentrate on the offer. If it is good, even in hard times, people will come.

Where does this leave us? Pubs may seem to the casual observer, to be holding up pretty well, but the underlying issues remain. They still need our custom, but we should always be aware, that like the iceberg, what you see on the surface, is only a fraction of what is actually there.

I had a chocolate and orange stout in the Northern Monkey. Boy was it sweet.  I'm noticing rather a lot of beers are far too sweet these days. Give me bitterness in beer. Beer needs balance, and that often can't be achieved just by throwing in certain New World hops.

My three locals will also be increasing prices at the end of the month as the cost of beer from the brewery increases. I'll be keeping my eye on that, but I suspect that won't make much difference.

An excellent analysis, Peter, as usual informed by actually getting out and seeing what's happening.

Like yourself, and Boak and Bailey, recently, I'd say pub traffic seems to be holding up, the problem is costs. I may be a bit insulated from those here in Sheffield, where I paid £3.20 twice last week, but pubs in Bedfordshire were charging £4.60 for Greene King IPA this weekend (though they were also full).

What can it mean ?

I've noted on todays cask ale list from a large regional supplier that I use, that it's getting very difficult to buy a 9g cask for under £100 + VAT. Those that are under aren't very far under either. Prices rises at the bar are inevitable. We're very lucky that the prices in the Dale aren't that much different from Martin's in Sheffield, especially with almost all the pubs giving a small CAMRA discount.

Hello, you've posted a picture of the Northern Monkey bar, which is also on Nelson Square, more or less opposite the Spoons and confusingly, The Northern Way.

Thanks. I'll correct it.

Solidarity with the pubs. Save pubs now

I guess the market is deciding who is the winners and losers.

I mentioned in a rather long post on Mudgie's blog that the pub I used to own in Ireland nearly 25 years ago closed down last week which surprised me, not least because you couldn't fail to make money in those days and virtually all pubs were wet only ( still remarkably the case for many pubs in Ireland.)It had been going for a century, was in a busy street with a lot of footfall and had a solid and thirsty working class clientele.
Prices and prices alone are what's killing the pub trade. Not just the cost of heating a pub - although a log fire is really not that expensive to run - but the actual drink itself.
It's between €5-6 a pint in the sticks and even mnore than that in Dublin. Lump that in with €20 packets of fags and the days of a fast prile of pints after work and double figures on Friday/Saturday have been replaced by the lure of cheap supermarket booze and illegal sports streaming at home which itself has exploded in recent years after Sky and the rest priced themselves out of the market to recoup their massive outlay.
The same has happened here in Blighty. Beavertown Neck oil is six quid a pint in my rural Wiltshire local, likewise the excellent Butcome Bitter at another local boozer.
Hardly anyone bothers opening on a Monday any more.
Some will close at 6pm on Sunday night.
All is not lost though. Another local boozer which knocks out pub grub will do 80 covers on a Sunday with one chef and a couple of minimum wage waitresses. With average main courses around £15 including Sunday roasts it's clear there is still an appetite for a once a week visit at the very least.
One last thing - it's no surprise 'Spoons are flourishing in Ireland after initially being ridiculed by the Irish pub trade clearly worried about the effect cheap prices would have on their monopoly.
The one in our nearest city in Ireland has been a stunning success since the day it opened.
Reasonable beer prices and cheap food. Who 'da thunk it ...

Add insurance premiums in Ireland on top and the big brewers hiking the prices despite record profits and you have enough fuel for a fire. My regular haunt is drink only, no music and the quietest televisions and taped music. Lovely warm friendly atmosphere and a fair amount of patronage.