Glasgow Doesn't Belong to Me! 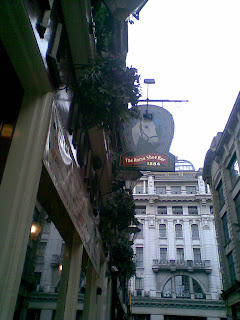 I am at my mother's at the moment. I arrived to a wet and blustery Glasgow Central station and after nearly four hours on the train, I needed the liquid refreshment that only beer can provide. So straight across the road to the legendary Horseshoe Bar. This place was buzzing, but I was unable to stop and savour the "patter", as the beer choice cask wise was limited to Caley 80 Bob or the ubiquitous Deuchars IPA. Damn. These just wouldn't do. So girding my loins I set off to Queen St station where I'd catch my train to Dumbarton. On the corner of George Square is the Counting House, a magnificent and huge conversion by JDW of an enormous domed former Bank of Scotland HQ. It is grand in every way and usually offers a great selection. Not this time really. I chose unwisely for a start. My first choice, Schiehallion, sputtered and died. It had gone! My second choice was Brains Bread of Heaven. A malt monster with an unpleasant harsh finish. Hmm. A half of the even more malty Cairngorm Wildcat was cloying. Deuchar's was avoided, but I'd saved the best 'til last. Phoenix Navvy would surely do the trick. It didn't. It was served southern style and the beer was ruined by it, with the balance being adversely affected. I reckopn too it was past its best. Damn again.

So what to do? I know I thought. I'll go to the Station Bar. This GBG pub is near where Buchanan St station used to be. It is a bit of a hoof, but I thought "it'll be worth it". It wasn't. In a busy pub I could see I was the only one drinking cask. Four beers here. Abbot? No. Theakstons Best? No. So halves of Downton Forest King and God help me, Deuchars IPA were procured. Both were vinegary and undrinkable. It was obvious no-one had pulled the warm beers through since they were last purchased, I left them and went home to welcome cups of tea. This simply isn't good enough in a GBG pub. I'll be writing to Glasgow and West of Scotland Branch of CAMRA to tell them so!
Posted by Tandleman at 10:29

Labels: Pubs
Email ThisBlogThis!Share to TwitterShare to FacebookShare to Pinterest

While feeling sorry for your plight, you bring up an important issue. There are simply too many pubs in the GBG that shouldn't be in there

Shame on your mother for living in such a poor GBG area...

Today was much better but the Three Judges is in for some stick!

Your big mistake was going to Glasgow without me. We had nothing but excellent beer (well, there was that shite served with the hamburger deal and you foolishly ordered a Fullers at Tennents) . . . hey, why the hell didn't you go to Tennents?

And when we were there, the Deuchars was excellent. How did you screw it up?