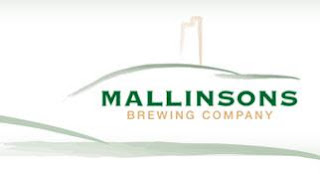 A chance to visit one of Britain's best up and coming breweries doesn't come along all that often, so consequently last night's trip to Mallinson's Brewery in Huddersfield was very well subscribed. Prominent in a very eager CAMRA throng were such luminaries as Tyson the Beerhound and two of the most interesting brewers in the North West, Dave Porter of Outstanding (who built the Mallinson Brewery) and Tony Allen of Phoenix, who can brew a decent drop when he puts his mind to it. He puts his mind to it a lot.

A cask of beer awaited us on arrival. We eyed it slightly uneasily. Silent mental arithmetic decreed this was going to be a dog eat dog situation, made more so as the pale, hoppy, fragrant nectar slid all too easily down our eager throats. It was interesting to listen to the brewster, Tara, as she outlined how she came to brewing (through beer ticking and home brewing actually) and how she had become fascinated by hops. Her philosophy is quite simple. Most of her beers are between 3.9 and 4.2 percent alcohol as "that's what sells". Almost all are pale and brewed using very pale ale malt or lager malt. She also brews a mild from time to time and some stout. The mild is distinctive she says. (Her forthcoming chocolate stout with Green and Black Chocolate sounded very interesting too and might just have a hop kick.) She doesn't brew brown beer. Explaining, Tara said there was two reasons; one they are boring and two; she is no good at them. You can't say fairer than that.

After the introduction, we got down to the serious business of emptying the cask. When we had done so, a collective sigh of relief went up as another one appeared. All was well with the world. What about the beers you ask? Well they were both pale and deliciously hoppy, with a cornucopia of different hop varieties in them. What more do you need to know?

The subsequent visit to the The Commercial, Slaithwaite wasn't at all bad either.
Posted by Tandleman at 14:51

Big fan of Tara's beers, the brewery is only across the road. Mallinsons beers always sell quick in and around Huddersfield if anyones looking to buy Mallinsons bottles mail order, we keep a stock of her bottles: http://tinyurl.com/33rr3qw

Is the grog free on these CAMRA pissups?

Nice one, so £20 of spoons tokens + free grog during piss ups. Any other stuff thrown in?

Is there an initiation ceremony where I get given a pair of sandals, copy of the guardian & I am judged on beard quality?

Do I have to grant an inspection of my house to check for lout?

The thing that I like most about Mallinson's beers are that despite brewing a massive list of seasonals and one-off beers, they are almost all uniformly excellent - both in taste (as in recipe) and quality. Mallinson's are one of the unsung heroes of Yorkshire Brewing - no fuss, no song and dance, just good stuff.

Cask had some Mallinsons on a few weeks back. I tried 3 halves of assorted beers (one was a dark beer), and they were all very drinkable. I hadn't heard of them but will keep an eye out in future...

I assume that Dave Porter is the same person who had Porter's Brewery (now gone) many years ago. I remember going on a trip to his brewery, and the beers were excellent. Probably late 80s or early 90s.

Cookie - In purely financial terms, you've already made a return on investment on that basis alone. So get signed up.

Nice post. Shame we don't get much Mallinsons down 'ere. I like the philosophy and it's sensible.

A full house and a waiting list tells the story of how popular Mallinsons are.

@mybrewerytap - any word on shipping to the continent, specifically the Bundesrepublik Deutschland?

These Mallinsons beers sound right up my alley--a hoppy mild!

Oddest in Chorlton has loads of Mallinsons on (often two at any one time) and they are almost universally very good. The Porker Porter which was on earlier this week was unusual for a Mallinsons but still very good.

Tara is doing a "meet the brewer" at Oddest, probably sometime in late November/early December.

Oddest in Chorlton does a lot of Mallinsons - more often than not two on at any time. Agree with others, it's almost always very good indeed. The Porker Porter they had earlier this week was different for a Mallinsons, but still excellent.

Tara is meant to be doing a "Meet The Brewer" at Oddest sometime towards end of next month or early December.

We (at Steel City) like Tara and her beers... But, then again, we go back a fair old while.

A Yorkshire Red Star co-operative IPA is also under consideration!