I knew the last few days would be busy. The twissup started in Manchester and clashed with not only the National Winter Ales Festival organising meeting, but a family birthday celebration. I'm no good at this sort of decision making, which always ends up with me pleasing no one, least of all me. So I went off to the twissup and played the rest by ear. I don't think I hit exactly the right note with everyone else who slipped a little down my ad hoc list of priorities, but at least subsequent ear bashings were softened by good beer and memories of a great time.

There was a lot of people there, some of whom I even knew! Baron Orm, who I hadn't met up to that point, had the wise idea of decorating his chosen few with badges based on their avatar. I wasn't one of this elite, but it was an inspired idea and on a wider basis, one that should be adopted for the next time. I did though miss out on meeting so many people, a lot of whom I didn't know and couldn't identify, while talking to others, but I did make some new friends. The beer was universally good and it was gratifying to see our cousins from the south lapping up the sparkled beer and being able to see for themselves that it isn't sparkling that makes for flat beer, but poor care. Though Zak Avery did bring a very fancy Italian bottle for sharing that provided a justifiably interesting talking point, it was the chance to talk more generally about beer with others that appealed most. I will brush over the fact that I was the oldest there, but seeing "young" people enthusing about beer was gratifying. It was even better to see them off their arses and in the pub, but I wasn't that sorry to miss out on Huddersfield though, purely on the grounds that I might not have survived it. While age may have its compensations and youth is no doubt wasted on the young, they do have an ability to keep going that left me long ago. I have compensated by reading the excellent reports of others on the Huddersfield leg of the game.

I haven't mentioned Lees Fools Gold have I? No? I thought not. It is very pale and very bitter and that makes a nice change for Lees beer. I enjoyed my Sunday pints of it. I guess some (late boil) new world hops to give it a more nuanced tropical or herbal hoppiness to balance the uncompromising bitterness wouldn't have been a bad idea, but well done nonetheless and more and different hops please in subsequent beers.

And of course there is the SIBA do which is taking up most of my time at the moment. It is all ready more or less. I have vented a 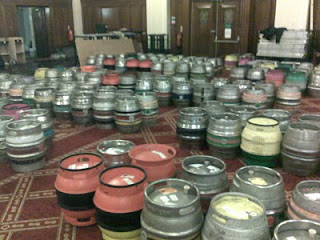 nd tapped like a good 'un. SIBA Technical has installed 56 brand new Angrams (quarter pint pull) and miles of pythons and associated gear. Today we'll see if the beer is all fit to serve and be judged. I do hope to see some of you there.

The photo shows some of the 283 casks for the SIBA festival
Posted by Tandleman at 09:11

It was a pleasure to meet you Tand. You are a scholar and a gentleman, sir

Good to see you again Tandie, albeit it for only a quick chat in the Marble Arch.

I share your pain on the lack of Twadge. My disappointment gets a baron rating of 5/5.

Any idea of how they are chossing which beers to go on sale first? Or is it just random?

Great write up Tandleman, maybe the baron will have a little something for you tomorrow... ;)

Sorry you weren't in the 'top 20' people to receive a 'twadge' - I didn't have enough to make one for everyone :(

Tyson- Random I think, but the champions will be on as soon as possible after they are announced.

Haha, don't you worry Baron. I was just pulling your leg! :)

Fantastic pong there yesterday. Mostly, anyway, but all in fine shape. Damned smokey though!

No tokens to deal with either. And the prices--£1 halves up to 4%--I say that's pretty good.

Between the Supreme Champion strong porter and the Titanic NY Wheat Porter at JDW's, I'd say I've now had two definitive porters. Only downhill from here, I fear.

Nice to have met a few of you there too.

Based on my visit last night, everything was up to scratch and as Alex Brodie writes in the intro to the programme "the beer is served - as God intended - in the northern manner, which is through a sparkler to produce a creamy head" which alone made the event worth attending.

You forgot Andrew Jackson’s Big Block of Cheese with nary a macaroni in sight.

Matt - Thanks. And it didn't leave anyone waiting too long either.

Thanks Tand - was a pleasure to meet you.