Fancy a Really Good Do? 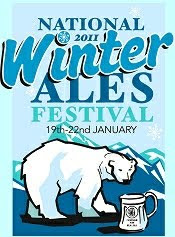 Of course you do. Everyone likes a really good do, so why the heck not? There will be beer too. Lots of it. There will be 254 cask ales at this shindig, with "got to try" beers such as Liverpool Organic's Imperial Russian Stout, Wapping's Damson Stout, Adnam's Tally Ho and Thornbridge St Petersburg to keep the winter chill out and to thrill you skinny. Or maybe you'd like something pale and hoppy? Suits You Sir. So how about a splash or two of Phoenix Navvy, Lancaster Blonde, or Marble 3.9? "Something unusual" I hear you demand, so why not have a go at Amber Ales Chocolate Orange Stout, Robinson's Ginger Tom, Dunham Massey Chocolate Cherry Mild or even Hopstar Smokey Joe?

Want to try unusual breweries that you don't often come across? That's fine too, with Irwell Works, Derwent, Tunnel, Fallons and Flipside to name but a few. Want to try some fantastic British Bottled Beer? Of course you do and with beers such as Worthington White Shield, Hardknott Infra Red and Dark Matter, Durham Temptation and many more, you'd be daft not to. If it's foreign beer you'd like, this party has it too, with Belgian classics from Cantillon, Boon, Orval, Rochefort and Oud Beersel (among others), Festbiers, smoked beers, bockbiers and weizen's from Germany on tap and in bottle, draught Czech classics like Budvar and Bernard on draught, more cider and perry than you can shake a stick at and much, much more. I think you get the picture by now.

This vast cornucopia of the brewer's art will be at the National Winter Ales Festival in Manchester from the 19th to the 22nd of January. All will be sold at sensible Northern prices in a fantastic venue with great transport links, reduced price fares on the buses to and from and great food. We expect record crowds, a fantastic time and the best National Winter Ales Festival ever. It's all on the web site.

I hope to see as many bloggers and followers there as possible, so do come and do say "hello".

Can't be much more positive than THAT!
Posted by Tandleman at 16:21

You should suggest it to Dredgie as a twissup. That'll bring the geeks in.

Looking forward to it, a dozen of us coming over, superb venue.

I'm loooking forward to it on the Friday. Just one question. How do they chosse the beers? My local brewery Brimstage isn't represented but other local breweries that I consider inferior are. Brimstage have reached the the final of CBOB two years running with Trapper's Hat but have yet to appear at the Winter Ales fest.

Availability, price, who supplies it, geographical mix, ability to supply in the right containers et. etc. and I'm guessing, the whim of the beer orderer.

Hoping to make it along there on the Thursday evening, all being well. Looking forward to it immensely.

I plan to be there, but haven't you been remiss TM? I've been advertising this on my blog for nearly two months now!

See you there, looking forward to meeting a few friendly faces again.

Look forward to seeing you Simon. My favouritest bit of beer festivals is actually two things. Firstly (though the hardest part of it all) is the team effort of getting it all together. Secondly meeting everyone either anew or for the first time. The reward isn't just the beer, it's the bit about when you see people you know, either to work with or socialise with and of course to discuss beer with. Beer really is a people thing.

Rob - I'll be your boss then. I'm chairing the Regional Porter's Panel. Look forward to seeing you.

Great! I may rope you into appearing on camera (my iphone) for your comments on the session..if that's allowed.

See you there. We're coming over on the 20th, as can't make the trade session due to working commitments. Will seek you out for a quick hello and a recommendation or three. Love the Winterfest.

Hope to catch you Leigh, depending on time as I'm giving a tutored tasting that day. Walking the walk!