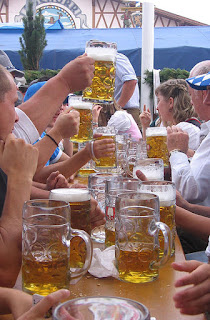 A few German stats for you to start the week off. I know it is lazy blogging, but I couldn't be bothered tarting this up too much. My interest in Germany is already declared on the left, hence this piece.

Beer sales continued their slow decline in Germany last year, dropping another 1.7 percent with the average person drinking just over 100 litres the Federal Statistical Office reported last week. (That's around a hefty 10 litres per head less in the last the last three years.) Unlike the UK, the drop was even sharper when it came to domestic sales, which fell 2.9 percent. Beer sales within Germany have fallen every year since 2000 with the notable exception of 2006, when Germany co-hosted the World Cup.

Premixed beer drinks such as Radler (shandy) are becoming more popular. Beer mixed with lemonade, cola, fruit juice and other non-alcoholic drinks made up about 4 percent of the total beer consumption. That was a significant increase on the 2.7 percent these drinks accounted for in 2009. Exports however continued to boom, with a rise of 5.9 percent, with bigger increases to countries outside the EU. Another 20 million litres went home with lucky brewery workers as a free perk of the job.

What is noteworthy in a British context is the viciousness of price wars in the off-premise sector. Market observers believe that 60 percent of all beer was sold “on promotion”. That has delivered a big hit to brewers’ bottom lines. Declining volumes and shrinking margins hit Radeburger Group, Germany’s major brewing group, particularly badly, with reported volume declines of 2.5 percent. News is even worse for AB-InBev with Beck’s volume sales dropping a reported 9.4 percent. AB-InBev’s other major brand, Hasseröder, lost even more: -10.7 percent.

While this may seem rather miserable from a German point of view, I reckon British brewers would give their eye teeth to be doing this well.

This article was cobbled together from Brauwelt and The Local. My thanks to them.

There was a similar piece in our regional paper, the RNZ, over the weekend. They were saying that they expect prices to rise, as even the "premium" brands can now be bought at €9.99 for a crate of 20 500ml bottles, and its unsustainable. Not sure if or how this would affact the smaller, local breweries (as I get the impression Germans tend to like supporting their local brewery, sometimes :D).

I saw something along the lines of German beer consumption is declining roughly in line with the declining birth rate.

That and older drinkers not being replaced then?

Essentially. That and a the view that younger drinkers tastes may be different (read mixed drinks), possibly compounding the effect on beer sales (not that I've noticed 'round here, where a nearby brewpub seems to attract scores of young adults).

Considering the cultural importance of beer in Germany, could it be that an emerging generation are more international in their attitudes? That fewer wish to drink a litre of Helles at lunchtime during a working day?

My observation is that beer is the main drink of young Germans of both sexes. Foreign beer is considered inferior to domestic, though the cocktail is popular late in the evening.

I'm to blame for part of this, as the missus and I consume mostly homebrew now that I've taken the hobby up again, on the order of 4 - 6 litres a day. Except when we go out, then it's mostly leichtes (low alcohol) Hefeweizen, preferably Gutmann or Schneider.

It'll soon be bierkellerzeit Nick. That'll get you back on track.