Vienna's brewpubs seem to make little enough of the fact that they brew. Most hardly tell you at all from the outside that they are a brewery and scarcely make a feature of it in the way, say an American one might. It's a kind of understated thing which is puzzling in many ways. Regrettably the beer is usually equally understated and again you wonder why. Siebensternbrau is oddly enough in Siebensterngasse, so at least no puzzle about the name then. It is big, but surprisingly cosy, with warm wood tones, the brewery providing a feature and various raised areas and upstairs rooms breaking it all up. The main areas are thankfully smoke free, the staff gruff, but friendly enough and of course there is home brewed beer. 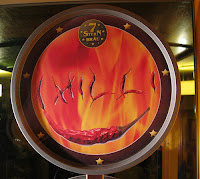 No Germanic brewpub would be seen dead not offering an unfiltered helles and dunkles bier and here is no exception. The dunkel is billed as being in the Prague style, though I imagine most self respecting Czechs would doubt that this thin, rather bland liquid would qualify. The helles is a lot less cloudy than most and despite the description of "hoppy", what was missing most from this beer was, well, hops.  On the speciality side is a chilli beer, which oddly is pale. Somehow I'd say chilli in beer works best in a really dark beer and then in considerably less Tom Yum quantities than here. This wasn't pleasant.  The other oddity is a hemp beer which was, well, just odd. Not unpleasant - odd and I didn't try the Bamberger Rauch Bier. My dislike of smoked beer is a matter of record. E left grumbling about unfiltered beer, her usual concern in these places.  The pick of the bunch was probably a rather sweet maerzen, so regrettably overall I didn't rate it that highly beer wise, though as a destination it was really rather good and of course, your tastes and judgements may differ and the range does change.  It has a great atmosphere though and is good for people watching and the food was typically filling.

I do have to mention rather a brewpub success though.  Wieden Brau isn't much to look at décor wise, but was genuinely local, the main bar was non smoking and the beers were more than competent with the pils being hardly cloudy at all and a very good chewy dunkel.  The special beer on offer, brewed on the premises, was a Koelsch which was nothing of the kind, but a very decent weizen. I asked the barman about this and was rewarded with a smile and a wink. Make of that what you will.  The food here is good too. I don't think I can face ribs again for the foreseeable future such was the portion!

Vienna has plenty of brewpubs but it is hard to see past 1516 and there are many interesting bars that are worth a look even more than the brewpubs. Watch out for the smoking though.

I thought the smoking ban down there was pretty similar to the Bavarian one. Guess not though. Sounds more like it is in Düsseldorf-land.

The big pity on that one was 1516 and a couple of good looking beers bars that E insisted (rightly on reflection) that we leave as we entered such was the smoke.

The accent was interesting. Higher pitched than Bavarian, but the pronunciation of some words seemed the same. Some simple things like Tschüss sounded different though. Plenty of Gruss Gott though.