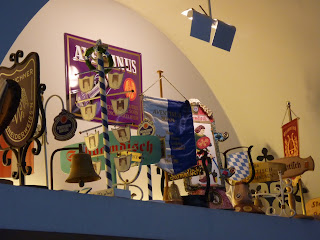 I used to regard the Weisses Bräuhaus in Munich mostly as a place to sit outside of on a lovely summer's day, while watching the traffic go past. You can't really watch the people on the pavement, as most seats face the wrong way. It isn't  in the most picturesque of locations in fact, though the building itself is quite grand. Why not sit inside then? Well, until the smoking ban, it was really rather a hell hole, with a leather curtain always drawn over the door and a fug that required an iron lung to negotiate. Then there was the beer, a kind of muddy wheat beer, which was neither dunkles nor helles.
The Weisses Bräuhaus was the brewing home of Schneider und Sohn until one gloomy night in 1944, when the brewery in Tal and the Weisses Beer Hall were destroyed in an RAF air raid.  It had somehow managed to survive around 10 major raids before its luck finally ran out. The company then, as now, owned a brewery in Kelheim in the countryside and all operations were moved there. The pub was rebuilt after the war, but the brewery never was.  Now Schneider is a major player in the wheat beer game and the Kelheim brewery is extensive and modern.  The beer range has been modernised too and now that the smoking ban is firmly in place, the doors have been flung open and a bright but traditional interior revealed.

We went mob handed on a very wet Saturday, though I had sneaked a couple of  beers outside earlier in the week in warm sunshine and I was astonished at the improvement in both beer and pub. I reckon they must have a new brewer along with the new range. Original is firmly auburn in colour with orange highlights. Full bodied, slightly bitter, not too heavily carbonated, with heady banana and clove esters and is very moreish.  It may well be brewed to the original 1872 recipe, but I reckon someone has tidied up the processes.  There is a pale version too and a green one, as in organic.  Aventinus, a weizenbock, still sets the mark for beers of this style. 8.2%, complex and dangerously drinkable, this is one not to miss.  Nor should you miss Hopfenweisse with its distinct American hop nose and IPA like drinking, but with obvious wheat undertones. It is a stunning beer and markedly different to anything you'll encounter in Bavaria, but again at 8.2%, not for the unwary.  It is temptingly only 30c or so more than the Original, which may or may not encourage recklessness.

Food here is superb, the dirndled waitresses a mix of matronly and young, the customers the same and the place is jumping at all times with a great atmosphere.  Don't miss it if you go.

The photo shows various stammtisch or locals table "markers". When the group come on, say, a Tuesday night, out comes their particular sign to reserve it.
Posted by Tandleman at 19:40

I went there twice on my recent visit to Bavaria. Great pub. Can't beat Aventinus Eisbock.

Yup, love it. It's a great place for a Weisswurt, Brezn, and Weissbier breakfast. I was surprised how well Aventinus went down at 11am.

In a couple of weeks I'll be checking out the one in Kelheim.

Aventinus is one of my favourites. oddly, I drink most of it at christmas; it's what i associate it with most!

I've never been a huge fan of wheat beers, but I have made one visit to the Weisses Braeuhaus.

Three years later my son and I found ourselves in Kelheim, which is the point of departure for river boats cruising down the Danube to Kloster Weltenburg. By the time we'd eaten and drank our fill at the latter picturesque monastic brewery, and then made the return river journey, there wasn't sufficient time to visit the Schneider Brewery in Kelheim itself, particularly as we needed to take a bus and then a train to get back to Regensburg where we were staying at the time. (The town itself seemed pleasant enough though).