I've always had a local pub. The one I worked in was my first, though I drank there already. It was a friendly village local which had its own idiosyncrasies, not least of which was the fact that back in the days when all Scottish pubs shut on a Sunday, we as a bona fide "Inn" were open. It was a tad busy shall we say, as hordes came from near and far for a drink. But more of this another time.

To have a local has always been important to me; it's just how I am. I like to walk in and enjoy the fact that people know me, call me by my name, ask how things are and that I know them. It is comforting and inclusive. Like a little family of sorts, where there are all the usual bickerings and disagreements, but so much bonhomie and laughter. It still does it for me when I walk in to my local and someone calls me by my name. 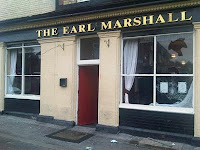 I was jerked back to one of my former locals the other night, when a tweet was received which advised that one of my old locals had been vandalised in the Liverpool riots. There was good news though. In an area which when I lived there was tremendously highly pubbed, the Earl Marshall was still trading. I have looked around the web and a lot of the others aren't any more. I know it closed for a bit and was boarded up, long after I left, but still it is open now. How brilliant is that?

When I first saw my little house, still being built, three doors down from the pub, that was the place that I went to have a pint and think about the whole thing. It took a while but I became a regular, part of the scene and able to knock on the window after closing time and get in. I was part of the half past four mob that were friends of the landlord and were exclusively admitted before opening time. (They'd all be pissed from lunchtime and singing.) I was protected from the rougher elements, able to take draught beer home in a glass while watching telly, did the Guardian crossword at the bar in my suit and was part of a thousand stories and good laughs. Eileen even got her shortened nickname of "E" there. There was a delicious time when the landlord Wally - an ex Liverpool taxi driver - parked his car on my drive, as there was work being done which took up his space at the pub. Beer was on the house for a couple of weeks despite my (feeble) protests.

The Marshall was a Tetley house then and when Walkers was revived, a Walkers one, but we used to go to all the other pubs too, in fours and fives and sometimes mob handed, drinking Higsons, Greenalls, Whitbread, Bass and the rest. All were within a ten minute walk. Everyone knew what pub you drank in then. It was a small world in a big city. Wally died just after I left and I dare say many of the hard drinking locals of 20 odd years have gone to that great pub in the sky too. But I remember them all. They looked after me and I had a great time with them.


So I'll raise a glass to the Marshall tonight and be glad that so many years later, I still have a local and have the friends I have made there and hope that not so many miles away, the Marshall will still be pulling pints for their locals. Maybe even, for some of my old mates? I do hope so.


My little house is in sight on the bottom picture. It was 3 doors along.
Posted by Tandleman at 13:06

Yup, a good local is hard to find and a local that doesn't take you for granted even more so.

When he was first teaching me to drink my old man said " Never make your local your local. "

I didn't understand what he meant then but I do now - over the years as I moved jobs and had different locals I always made a point of disappearing to another one for a week or two just to keep my usual landlord on his toes.

Or when he was already pouring a pint of my usual without asking I'd ask for something else.

As a customer I'm a great believer in never letting the tail wag the dog.

I remember I once crashed out in your little house the night before an RLC, or was it the night after? Anyway, for some reason we didn't make it to your local - pity.

My local in Southport has changed from the Guest House (from 1974) to the Old Ship (80s), the Wellington (90s), the Falstaff (late 90s & early 2000s), and back to the Guest House again (although I never stopped calling in there). The reason for moving usually involved the fact that the pub had gone downhill in terms of beer or licensee.

Does it count as a local if it's over two miles from home and you've *walked* there only once or twice in 7 years as opposed to driving? If so, then I've had a local.

Ain't got one now though. Ran into quite a few in East Yorks last week that I wouldn't mind having as my local at all.

I ride past this boozer twice a day, so it's been really sad to see the damage that was done by idiots.

But to their credit, the windows might still be boarded up, but there's a 'business as usual' sign on the outside.

Probably just a bit dark in there!

It always was a bit dark. Especially when we had a stay behind.