"What's the difference between characterful and rough?" I pondered from the top deck of the 55 bus bound for Oxford Street. Wind back two hours and I was walking tentatively from Walthamstow Central station towards the King William IV, the home of Brodie's Brewery. I say tentatively as I wasn't entirely convinced I was heading in the right direction and I was in what seemed a rather dodgy looking part of London. A quick check at a bus stop map reassured me and crossing the busy junction at Lea Green Road found me outside the pub, unscathed. 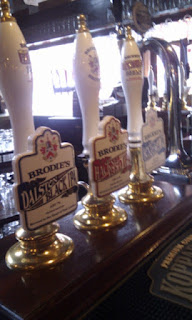 The pub itself is great. A proper pub with bench seating, two large rooms and long windows giving it a bright feel. Two very handsome Truman Hanbury and Buxton mirrors caught my approving eye. Fine examples indeed. The bar positively bristled with handpumps, almost all selling Brodies own beers, though I did spot a Magic Rock one. A few locals with proper Lahndan accents conversed and all seemed well with the world. Brodies Citra was superb for such a weak beer, but it was the Shoreditch Sunshine that er.. shone out for me. A super golden beer with plenty of malt to shore up a Galaxy hop driven taste. A cracking beer. I tried the American Brown which was a good example of the style and the locals favourite Bethnall Green Bitter which was a very decent drop. I didn't try the strong beers on as I'd a full afternoon ahead, but what I had was very good, cool and in great condition.  Nor did I ask if they did thirds, but that would be great for trying a few more. Either way, I will be back.

Thanks to Twitter I was advised to get the 55 bus back from opposite the pub. A stroke of luck saw one come immediately and a top deck front seat gave me a birds eye view of things as the bus wended its way back west. I noted quite a few closed and boarded pubs and many ex pubs put to other uses, but plenty still seemed to be open, so a mixed picture. Now back to my question. I am not sure exactly, but visually the areas I passed through on the way back, like Hackney seemed "characterful". Leyton seemed "rougher", but I couldn't really define why. There you have it then. Its just a feeling. 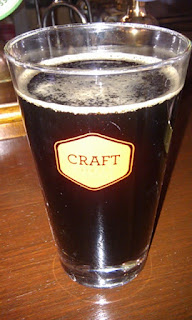 I had intended to nip into the Old Fountain,but missed my stop and carried on to Clerkenwell and the Gunmakers. The irrepressible Jeff Bell was there. The beer was good and sparkled, though Jeff tells me his range of beers are chosen to suit his local customers who prefer less hop forward darker beers. Fine. He still keeps them perfectly and it is stil a great little pub. I enjoyed my drinks, particularly East London Brewery Pale Ale. No visit to Clerkenwell is complete without a visit to Craft. I have never had a bad pint there. A couple of halves of porter and stout would certainly have benefited from a sparkler though. Thornbridge Creamy Vanilla Stout needed the creaminess a sparkler would have brought. I had a nice chat with fellow Scot Tom, the Manager, who doesn't believe in them. Cutting a long story short, we agreed to differ, but thanks to him for talking to me about it. And I must repeat, sparkling a well conditioned beer does not flatten the beer, which was Tom's main concern.

So, a good afternoon. No bad beer at all, a smashing pub that was new to me visited, a chat about sparklers and good timing with buses and trains. London worked well yesterday.

Best beer of the day? Shoreditch Sunshine. What a good beer. They know their stuff at Brodies.
Posted by Tandleman at 09:42

...fellow Scot Tom, the Manager, who doesn't believe in them [sparklers].

The 56 is also a good bus route back from there. It goes right past the Pembury Tavern, passes through Dalston & Canonbury, where there are a number of decent options these days and, if you hop off at Clerkenwell Road you are a few minutes walk from the Craft & The Gunmakers. Or the Old Fountain in the other direction.

We don't want sparklers in London pubs thank you very much

Really? I suppose some people simply prefer living in the dark ages.

Really? I suppose some people simply prefer living in the dark ages.

could say that about prefering cask to keg

Well. I know who I'd prefer to look after my beer, serve ny beer, judge the beer or have anything at all do with beer. Coxy or Tyson? Step forward Tyson. Sorry for stating th'obvious but sometimes the deluded need it.

That's your problem , you only listen to each other , usually other bloggers or mates. If the general public don't count ,leave your blog for members only. I hate keg beer ,its just an opinion, you know Tyson not me , so how can you positively say his opinion is better? You come across as a beer snob in that statement,sorry im not worthy. You may become a slap yourself on the back club.What did I say about serving beer , looking after beer , nowt, and as for judging beer I can tell you I can tell a perfectly conditioned pint thanks and I don't tick so judge a beer honestly over many pints of the same stuff. I shall still read your blog, love it , but please don't come over as lord beer almighty!

there's quite a lot of us that would happily do away with them in Yorkshire too!

slotted metal ones just about acceptable for stouts etc, but the plastic shower-head things are the devil's dispense. sparklers kill hops!

Although I'm a Northerner, I'm not evangelical about sparklers. However, it must be true that creating the head removes some of the condition. For some people that is clearly a price worth paying and for others it isn't. There's no right or wrong here.

Northerners who attend CAMRA beer festivals where most beers are on gravity are quite accustomed to beer served without sparklers, and at the excellent Wigan beer festival this weekend, nearly all the beer sold out without any complaints about the lack of a sparker-created head.

So, in the spirit of the sparkler squabble (debate is far too grand a word), which do you prefer: daddy or chips?

Kevin , who runs the Verulum brewery told me at an AGM in the 90,s CAMRA nearly split over sparklers ,is this true?

Coxy. I don't know. Sorry. But it wouldn't surprise me.

An interesting experiment is to order halves of something both sparkled and unsparkled. Interesting not just in terms of the effects on the beer, but the reactions of publican and punters.

when we launched our first brew, we did exactly that. the unsparkled was far better, but then that's unsurprising - we brew hoppy beer, sparklers kill hops. as for the suggestion brewers should use more hops to compensate - we already use 1.5-2kg per barrel, so can't really fit many more hops in!!

But that's more likely the pusb you were drinking in rather than the sparkler itself.

Really? I await your scientific paper on the matter with baited breath.

if i had time I'd do a PhD on how sparklers kill hops!

sparklers knock flavour from the beer to the head, so you end up with hoppy froth and bland liquid underneath. unscientific maybe, but in the test we did with our own beer the unsparkled was more bitter and more citrussy in taste.

allegedly northern beers are brewed with more hops to compensate, though in most cases more still isn't enough for us! but there is no amount of hops that I think would compensate for what the sparkler takes out - more is better when it comes to hops (IMO of course...)

What I mean is I've had good and less good both ways, in both halves of the land. And I'm still not sure what's better -- sparkled or not. There are pluses to both.

it may not flatten it but it does reduce condition, as much as you may pretend it doesnt.

That said Stout and Porter I would usually prefer with a sparkler.

I don't dispute it takes some of the condition and puts it in the head. The key is how much. I'd suggest very little and what is "lost" is replaced in spades by a better look and better mouthfeel.

As I've said often, but it is worth repeating, if the beer is flabby in the first place, a sparkler will kill it. Too much Southern style beer is flabby. When properly conditioned, I can live without a sparkler. If only conditioning of cask beer was much better everywhere.