In our quiz league we visit a few clubs. These are by and large a bastion of smoothflow beer and this often brings a chance to spot some unusual beers. No, I don't mean interesting imports, but strange oddities of our brewing past. I mentioned the subject before here. There was a new one on me last week in Delph Band Club. This weird clan of zombie beer, brought back from the brewing dead for a half life, as bastardised as Frankenstein's monster, now includes, presumably from Carlsberg,  Walker's Bitter.

Walker's was a very large brewery indeed, based in the (now former) brewing town of Warrington. The original brewery in Dallam Lane was set up in opposition to the town's other large brewery, Greenall Whitley. Dallam Brewery, was the proud home of Peter Walker Ltd, founded by Andrew Walker, an exiled Scotsman, in1864.  Walker's merged with Joshua Tetley of Leeds in 1960, which was to be the start of a series of mergers that later morphed into Allied Breweries.  Dallam was a very substantial brewery - I know - I've been there, both to tour round it and to return empty containers. It's original buildings were superb and I recall the Walker's logo of a gilded,mounted knight and stained glass windows amid oak panelling. I wonder what happened to all that? It was closed as surplus to requirements by Carlsberg in 1996. In between times vast quantities of  Tetley Bitter was pumped out of Dallam and not bad it was either - most would say the equal of the Leeds brewed version.  Next to Higsons, it was the beer I drank most of in Liverpool when I lived there. They also produced the original Walker's Bitter for a small number of outlets and then for a time, a number of beers under Walker name, even setting aside a chunk of their pub estate - mostly at the heritage end - to be rebadged  as Walkers pubs.  I used to drink in one. 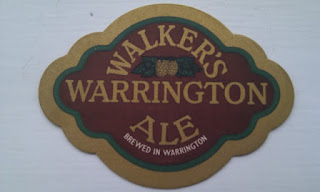 Walker's Brown Peter brown ale was a common sight in that famous Liverpool mix of brown bitter - a half of bitter in a pint glass and a bottle of brown ale. Greenalls itself closed in 1991 and its beers were then brewed by its formal rival in Dallam. It was a big job as Greenalls had over 1500 pubs to supply. When Dallam closed, the Greenalls beers ended up in Tetleys in Leeds and JW Lees, then at Thomas Hardy Burtonwood. When Greenalls sold the lot,  the beers slowly disappeared altogether.

The Walker name died, or so we thought when Dallam closed. Ironically, Warrington's only surviving brewery, Burtonwood, now produces a myriad of contract beers, including, possibly - who knows? -  Walker Smooth Bitter.

What goes round, comes round.

Mann's Chestnut Mild was also on sale in the Delph Band Club
Posted by Tandleman at 10:13

A year or two ago, I saw a Walkers smooth font just like the one you've pictured in the Derby Arms in Aughton, Lancashire. I was quite surprised too, although I doubt the recipe has any connection to the original Walkers. I wonder who brews it.

I was a student in Warrington in the 1970s, and it really was Greenall Whitley Land, just as the adverts boasted. Of the few Tetley pubs, we knew two that still sold the old Walkers Bitter under the Tetley name: we all thought it far better than actual Tetleys. CAMRA produced stickers for these pubs with something like "We still sell Walkers Bitter" with the attractive Walkers trade mark. When they revived the Walkers name in the early 80s, I was pleased, until I realised they'd discontinued the original Walkers, which was a shame, and had produced several new recipes. The new range consisted of Mild, Bitter, Best Bitter, Warrington and Winter Warmer, of which the last two were excellent; the rest were merely all right. My uncle's pub in Bootle, the Victoria, sold the best pint of Warrington I ever came across.

The new Walkers Bitter was 3.3% and the joke in Liverpool was that a man was stopped by a policeman who asked, "Excuse me, sir, have you been drinking?"
"Yes, replied the driver, "Walkers Bitter."
"Very good, sir, drive on."

Seems I knew about it too, but it has been deleted from RAM. Read what was said then.

Carlsberg's keg bitters are produced at Camerons, so it's possibly made there?

These weird survivor brands are fascinating. You've stumbled across Ind Coope yourself, haven't you, I seem to recall? One of our locals sells kegged Ansell's Mild, which always seems odd. Must be one regular who drinks it.

No - nothing Ind Coope unless you are thinking of Lees brewed Burton Ale? Just sold as Draught Burton Ale now.

Damn, I have a half-written post about this sort of thing too. Must finish it. It may involve venturing into some pretty dodgy pubs to take photos though.

UK pub and bar operator, Punch Taverns, announced it would resurrect the name Taylor Walker for pubs in London and around the UK on 19 October, 2010. This would unite some of the company's most historic and traditional pubs under the Taylor Walker Pubs brand. The Taylor Walker name is still owned by Carlsberg UK, who have signed an agreement with Punch Taverns to use the name for the pubs. Initially 106 pubs. Ind Coope also took over Benskins and Friary Meux. youhavemale@live.co.uk

A Benskins Smooth Bitter has recently made an appearance in the ex-Benskins Red Lion Pub in Watford. I'm not sure what's worse, the identi-kit beer devaluing a cherished name, or the appauling job they did trying to recreate the pennant emblem on the pump...