London in the sun.  What could be nicer?  Well Manchester in the sun obviously - better beer to be had - but culture? That's a different issue and  London has it all.  After a (half) day out with Tyson and crew, we decided on a trip to an old haunt - Greenwich.  Two or three ideas.  A walk in the park, a look inside the old Royal Naval College, a quick shufti at the Cutty Sark - it was built in my home town of Dumbarton don't you know and there is still a pub on the High St with the same name - and a couple of restorative beers in Meantime's Old Brewery, a place, to which somewhat neglectfully, I hadn't been. 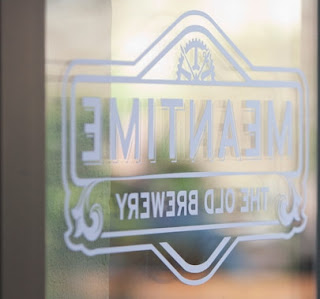 We enjoyed the walk, I thought the Naval College and whatnot delightful and unfussy. They even allowed you to sit on the banqueting seats to allow you to stare more comfortably at the impressive ceiling. The Cutty Sark was rather antiseptically impressive, though like a hammer where you have replaced both the head and the shaft, you have to wonder if it is indeed the original hammer at all.  All that sightseeing and walking about in the sun makes you thirsty, so our arrival at the Old Brewery was welcome.  Outside was a sea of bodies in the grass and in the beer garden.  I observed closely.  A mixture of plastic and glass gave me an inkling that likely you were meant to use plastic outside, so I wondered what would happen.  Inside we found a decent spot in a corner. It was going like a fair busy, but the staff were cheerful and kept good order.  I put my barman through his paces by asking for a couple of samples even though I knew what I would likely have. He was professional and friendly, offering decent advice despite the hordes.  Good stuff.  I settled on North Fresian Lager, a Jever-alike, but really rather magnificent, with good body, freshness, bitterness and a hopsmacking finish.  What's not to like? Well perhaps the £5.20 a pint price?  OK. Certainly the £5.20 price, but it was good. Very good. E was much less impressed with her Pilsner which did seem dull.  Or was that just dull in comparison. She rapidly switched to the same beer as me.

The place was heaving and we watched the dynamics of it all. It seemed that you randomly got glass or plastic and nobody was stopping anyone going outside with glass.  Service was friendly and efficient. My three rounds were all in glass without me asking.  Top marks.  I did have a couple more tasters, but nothing much impressed beer wise.  Perhaps I was spoiled by the North Fresian? Service was brisk and friendly, décor was comfortable to imposing, with the brewery conditioning tanks, clearly signed with exciting forthcoming beery attractions being a high point.

So overall?  I (we) had a good time, thought the North Fresian excellent but expensive, thought the service good all things considered and hopefully when I come back on a quieter day, I'll have more interesting beers to choose from.

I didn't experience any of Tyson's bizarre occurrences on this occasion.
Posted by Tandleman at 10:56

It's a free country, if people want to buy £5 pints people will sell 'em.

But out of interest, is there a price where you say, bollocks to this, to the spoons! If so, what is the Tands upper limit?

I like the Old Brewery and the Meantime beers are okay. I can see why some might find them lacking, but I think they're clearing aiming at a particular (affluent, non-beergeek) market.

It's not a cheap place but it's also really not any different to everywhere else in Greenwich in that regard. You'd be a fool to pay the price of some of the bottles though, especially their College Beer Club beers which you can sometimes find there.

I think that was about it. Taking the piss as it is in some ways.

I wouldn't pay £5.20 for a pint. No doubt I'll have to someday - I can remember my friends and I laughing at the bar steward in our college bar when he said that it wouldn't be too long before we'd be paying 50p a pint - but not yet. I'd have been heading for the Spoons.

£3.50 is my top limit. Good job I drink in Manchester rather than London.

How much do you reckon the same beer would be in that Port Street place?

You'd have to ask Tyson that one Coxy. He more or less lives there. :-)

I can remember the uproar in my local about twenty years ago when Holt's Bitter hit a quid.

Tightwad Northerners complaining about prices in that there London.
Who'da thunk it ?

been through the £2 barrier twice thanks to moving Brizzle - Sheffield in 2005. Sheffield now split, with many of 'my' pubs in town now well over the £3 mark, while the valley of beer is still approaching £3 for 5%+ beers

That said, I'll often part with £3+ for a half of imported/strong barrel aged stuff in the Tap, but almost always only one half. If a 'normal' beer (i.e. no adjuncts, not imperial strength and not imported) is over £3.50 then it better be bloody amazing to justify the price

£5.20 for a locally brewed, standard beer is beyond piss-taking and into the the social experiment stage - let's see just how much we can get people to pay.

I am curious as to who it is that is willing to pay these prices.

Is it hipsters?
Is it rich londoners who see £5.20 as small change?
Is it normal folk willing to try it once just for the experience and then not bothering with a second pint?

How long will this situation last? Eventually the hipsters will move on and the normal folk will have tried enough different stuff and will go back to something affordable.

I'd agree with Dave's pricing in general... outside of London. I don't think the Old Brewery has a particularly specialist or hipster crowd, just locals (by definition affluent as you wouldn't be able to afford to live in Greenwich otherwise) and tourists.

I'm not going to deny that Meantime don't try it on with their prices, but the £5.20 price point needs to be considered in relation to the local competition. A pint of Heineken will set you back £4.35 round the corner (http://www.trafalgartavern.co.uk/TTWineMenu.pdf), Peroni £4.50 (http://www.thegipsymothgreenwich.co.uk/document/thegipsymothgreenwich-websitedrinkslist.doc). One bar even has Brakspear for £5.40 (http://mitregreenwich.com/files/2013/05/Mitre-Beer-List-APRIL-2013.pdf - I'm assuming this must be a typo?). £5.20 in comparison to those local prices isn't that crazy for a brand that is clearly trying to pass itself off as a premium product.

(I know that you can find examples of imported craft beer being cheaper than local craft on those menus - but that's an oddity that is not unique to Greenwich).

one thing in Anonymous Boozer's comment intrigued me (purely out of academic interest!) - Peroni at £4.50 locally... Peroni is generally over £4 round here too, (apart from the fact it somehow it gets passed off as a premium product despite being fecking awful even by mass produced lager standards), so very little difference in that between here and Laaahndan, yet over £2 (that is 60%+!) difference in the Meantime (equivalent, ovbviously, hardly ever see Meantime here)

We visited the Old Brewery one Sunday last December, and sat out in the courtyard beer garden (under the heated umbrellas), as the place was so full inside. I don't recall what the prices were (apart from being considerably higher than normal), as we were trying halves of several differnt beers between us. (Hopefully Meantime don't follow the oncreasingly shamefull practice of charging a premium on halves?).

As an aside,the other week I noticed a couple of Meantime beers on sale, airside, at London City Airport. I wasn't tempted as we were about to fly out to Nuremberg, where we would be able to enjoy equal, if not better beers at much cheaper prices.