The Good and the Not Good 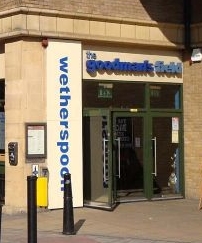 I have a lot of catching up to do after my week in London, so let's start a mixed story of good and bad. The Good? Well to some a surprise maybe, and it is relative, but let's start with JDW's Goodman Fields, a pub near Tower Hill station and now adjacent to many new hotels which are clearly helping trade. This is the nearest JDW to our London flat and that, footsore as I was greatly influenced where we went after I trudged back from Olympia on Saturday night. I just didn't have many more steps left in me. Now Goodman's Field has been piss poor in the past, with the usual set of JDW failings of queues, dodgy beer selection, indifferent service, and zero atmosphere. This time it was different, starting with the fact that it was packed, thus providing atmosphere, continuing with a charming Spanish barmaid who could not have been more pleasant or speedy - especially in that 200 mile an hour way of speaking the Spanish have - and in the beer (I can't remember what is was though) which was excellent and for once in this neck of the woods, pale and hoppy. We ate there and despite the crowds it came quickly, was hot, tasty and well presented and we were asked twice if everything was OK by enthusiastic and cheerful staff. Amazingly, tables were promptly cleared and we were given a cheery goodbye. Clearly they have kicked out the deadbeats they had before. It just shows that in any pub, the attitude and enthusiasm of the staff can make an ordinary place well worth visiting and leave you feeling "That was good". 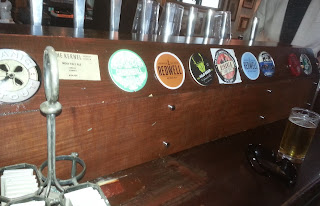 But into each life a little rain must fall. On Sunday we walked along the re-instated Thames path on the City side of the river and after a quick and satisfying pint in the Harp (temperature exactly 13°C) we went, acting on a tip that it is now a craft beer bar, to the Lyric on Great Windmill St. In a teeming Soho, it was rather empty and to my eye at least, a tad Spartan and dog eared in appearance, but there was indeed craft keg and four handpumps, though the two tasters were warm and unappealing. No matter, what about the craft. E settled on a half of Redwell Craft Pilsner (4%) in an act of solidarity with the bullied Norwich Brewer and after a taste of hers, I decided on a pint of the same. Alas nothing happened when the tap was opened. The gas had gone. Ten minutes later, the young barman came back and confessed himself stumped. He hadn't been trained and could do no more. I didn't fancy a bottle, nor any of the cask, so we paid for our half and left. Now of course that was unfortunate, but leaving an untrained barman in charge isn't. It wasn't his fault, he did his best but overall the impression was of poorly kept beers, an empty pub when all around were busy and general incompetence.  Why would I come back? First impressions really do count.

So lessons? Get the staff, offer and attitude right and no matter how unpromising the pub, you are likely to have a better time in it than in a pub which simply doesn't deliver on any customer level.

I do appreciate that I could find the opposite of what I found on a different day, but like a footballer, you can only play what's put up in front of you.
Posted by Tandleman at 13:10

You should start your own boozer, you've have a chain of them in no time.

but that might just show that pubs are always worth a second chance, as my first visit to the Harp (on the back of its pub of the year win) the first pint I had was a total dud,the replacement wasnt much better, and the place felt like it was suffering from a monster hangover from the night before, the perils of a Sunday lunchtime pint.

I made my first visit here just a few days before you (and which is why I'd seconded TIW's suggestion).

I had three halves of craft keg - one of the Wild Saison beers, Harbour PA and the Redwell Pilsner - all were in very good nick.

I was there about 3:30pm on a Friday afternoon and it was relatively quiet but it looks the type of place that would soon get unbearably busy.

I'd give it a second chance...