Did you know that Hebden Bridge in West Yorkshire has one of the biggest lesbian populations per head in the UK? Well it does. I am not sure what attracts them to this neat and straggling little town on the Calder Valley, but then I wouldn't would I? For those interested in such things, the Rochdale Canal also flows through it, though I suppose it would be a long, tiring swim back, so it is good that bus from Rochdale, the 590, accepts Greater Manchester First Day Savers. Lesbians notwithstanding, the attraction for us was a day out across the border in Yorkshire, to visit twee shops, walk around, have a bite to eat and a few pints. 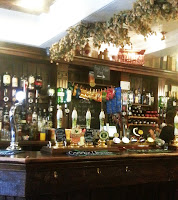 The day started off badly as we missed the hourly bus by a few seconds, but arriving an hour later, I confused myself and E by mixing the place up with Sowerby Bridge, therefore finding it impossible to find that pub by the canal I'd been in a couple of years ago.  It's a mistake anyone can make and once my phone had been consulted, all was revealed, so changing our plans we made for Stubbing Wharf which is a perfect canalside pub in every way.  Delightful inside and out, a great range of beers, cheerful old locals and bloody muzak.  What on earth is that for?  The group of local old gents, discussing Syria called on the barmaid to change it to Frank Sinatra since "I know you are not allowed to turn it off".  Black mark for that.  For a good description, I recommend that you read this article from beer writer Arthur Taylor (one of my CAMRA branch members) in the Daily Telegraph. 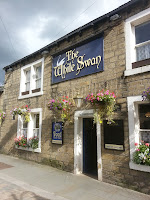 A bit more wandering around and we felt hungry, so at random we called into the White Swan, just in time as lunchtime service was about to end.  A extremely diminutive barmaid of the old school served us with a cheerfulness that was obviously inherent.  Beer was from Black Sheep and somewhat oddly, from Everards, with their Sunchaser being served, as was the Black Sheep,through an autovac, which to my mind, though it does give a beautiful creamy head, has a tendency to flatten the beer a tad.  The two roomed pub, with a bar area and what we'd have called a lounge at one time, was rather empty, though a few popped in from time to time for a quick glass.  Food prices were as old fashioned as the service and portions plentiful.  You'd be stuffed for under a fiver.
The barmaid, and later the owner, chatted to us.  I remarked that I'd last been in around five years ago and that it hadn't changed a bit.  She agreed, adding ruefully "The only thing that's changed around here is me and I've just got older - and it won't change either as long as I'm here". Good for her. 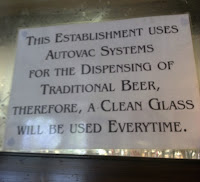 We supped our beer happily and ate our meals, served by an astonishingly pregnant young woman who was teased about her size by the barmaid.  There was a juke box too. Oddly enough it was one of these modern ones that has every record ever, tucked in a corner by the bar.  I put on some 60's stuff (5 for a pound) and the elderly barmaid sang along happily.  It was just perfect in its warmth and simplicity.

We left with considerable reluctance, but the 590 is only one an hour, it takes a while and having missed one that day, I didn't want to miss another.

I was also able to buy a couple of bottles of Henderson's Relish in one of the independent shops albeit at a considerable mark up to Sheffield.  Result.
Posted by Tandleman at 10:24

You mean you missed out the Fox & Goose between Stubbings Wharf & The White Swan!!!!

It was shut when we passed. Something about a community co-operative takeover was on a board.

Nothing beats a good jukebox. A little bit of raging speedhorn soon blows the cobwebs off the old blokes leaning on the bar.

Or you could be like me and put on something appropriate to time and place?

I'm surprised the autovac is still permitted; I doubt anything similar would be tolerated in any other area of hospitality. It is a disgusting device that returns to the cask contaminated beer that has already had a lot of condition knocked out of it through being served once through a handpump.

I once wound up a room full of beardie weirdies by putting firestarter by the prodigy on 20 times in a row on a pub juke box. Had to be done.

The community buy out has been successful.

The pub doesn't open until 3 p.m. in midweek.

RedNev , I am surprised too. Although to be fair it returns 'drip tray' beer to the line, not to the cask.

Cheers for the heads-up on the autovac. The White Swan is now on my (imaginary) list of places to avoid.

I really, really can't grasp why some people --people whose palates I otherwise trust and rely on for guidance-- not only don't slag off on autovacs (and whatever the Scottish variant is), but sometimes even *defend* their use. I can see publicans wanting them, but we consumers?

I want my live beer fresh, not regurgitated through a drip tray that's been sitting out all day and evening with peoples' spittle, sneezes, flies, pub dust, pub cat hair and who-knows-what-else landing on it!

Some of the lesbians are there as self-styled 'guardians' of Sylvia Plath, buried up the hill in Heptonstall.